During this case study, it will be necessary to investigate of numerous different approaches to finance. The Chief Financial Officer of Purinex, Gilad Harpaz, has been entrusted with making a choice between three potential courses of action to maximize long-term value for the firm, minimize risk, and provide appropriate money for operating expenses in the immediate future. Purinex is a biotech firm that operates in the pharmaceutical industry. The company presently has 35 active patents and another 190 patents that are in the process of being developed. In the ongoing quest to find a treatment for diabetes and sepsis, this is one of the most promising new advances that has taken place recently. This firm employs a total of 14 workers at this location. The price for each month is $60,000, and the firm has liquid assets totaling $700,000, which should be adequate to fund costs for the next year. 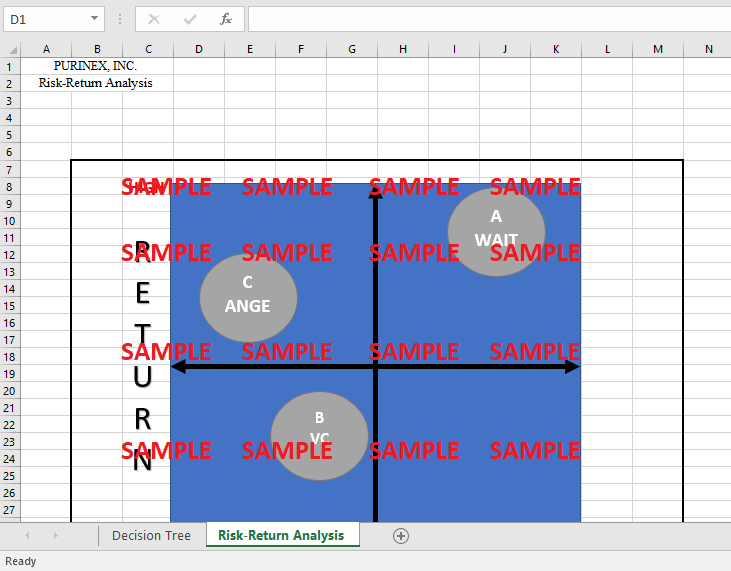 Gilad Harpaz is up against a hard challenge since he is responsible for ensuring the continued financial well-being of his business until he can secure collaboration with a major pharmaceutical corporation. If nothing is done to preserve it, it will be extinct in precisely 11 months from now. If the organization is successful in getting the partnership, one of the primary chemicals may be transformed into a drug that can heal the illnesses that are the most severe and hardest to treat anywhere in the world. Purinex Inc. has a little over 700,000 dollars in cash on hand, but the firm has monthly expenditures of 60,000 dollars. Purinex had monthly expenses of 160,000 dollars, even though the company only produced approximately 100,000 dollars in sales or income from profits from government research grants. This was because Purinex had a large number of employees working in the company. Considering the low chance of securing short-term agreements in the fields of diabetes and sepsis, Harpaz carried out research to estimate the likelihood of three possible futures for the company. These futures were diabetes treatment, sepsis treatment, and a combination of both. It was possible to go on with the company in one of three ways: by raising a round of venture capital, by raising a round of angel investment, or by waiting for six months. There were significant risks involved with each of these three potential outcomes. Purinex may come to the conclusion that it is no longer profitable to continue researching and developing potentially useful pharmaceuticals in the event that the firm is unable to form a strategic alliance or get further funding. In the event that they continued to put up a fight, Harpaz felt convinced that the terms of the agreement would become even more onerous for them to fulfill.

2. What is Purinex’s business, and how would you describe its strategy? What do you think are its founders’ goals and vision for the company?

The biotechnology business Purinex now has 35 patents and is in the process of applying for an additional 10 patents, all of which have the potential to be used in the pharmaceutical industry. These patents were acquired by the corporation with the intention of using them in their upcoming product lines. This company is on the ascent, and it has the potential to offer innovative treatments for crucial illnesses such as diabetes and sepsis. Purinex's long-term objective is to ensure the company's continued existence by placing itself either as a candidate for an initial public offering (IPO) or as a prospective buyer of another company. This will allow Purinex to continue its operations indefinitely. It is crucial for the firm to protect and preserve an essential collection of intellectual property if it wants to achieve its aim of being a possible candidate for an initial public offering (IPO).