Quality Furniture is a manufacturer of high-quality home furniture. It sells the furniture through department stores, independent retailers, and regional chains. The company sales are seasonal, where the sales are at a minimum is summer season and at its peak during the holiday season in December. The company makes a significant portion of its sales on credit. The furniture industry has recently experienced a downturn where the volumes and prices of furniture products have dwindled. Retailers have further reduced their furniture orders because they expect the demand to diminish even further. The competitive nature of the industry requires Quality Furniture to continue offering credit to its customers because a tightening of credit might result in loss of clientele. However, the company is also concerned about the ability of creditors to meet their financial obligations. The decrease in prices and sales of furniture items has resulted in diminishing profit margins for furniture retailers. This decrease in profitability is likely to place burden on the financial position of these retailers. These circumstances leave Quality Furniture in a quandary. On one hand, the company might lose customers if it tightens its credit terms. On the other hand, the customers of the company might default on their payables if their financial position keeps on getting worse. Quality Furniture is particularly concerned about two of its credit customers, Llyod Inc and The Emporium, who are experiencing the adverse effects of the slowdown in demand. 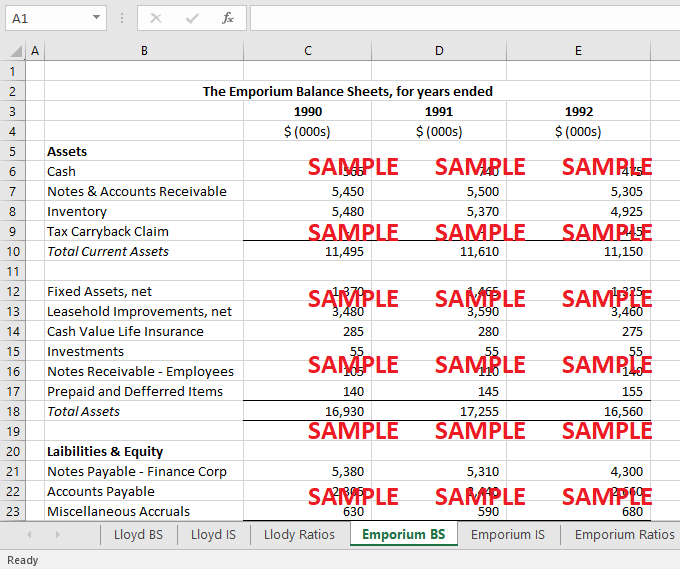 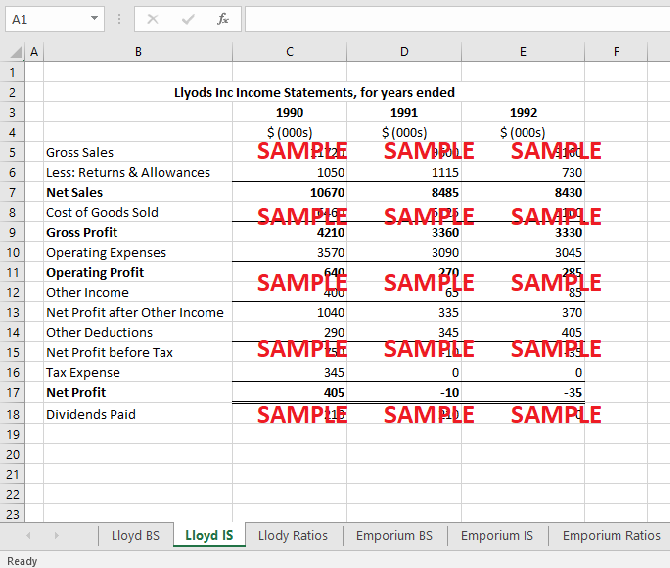 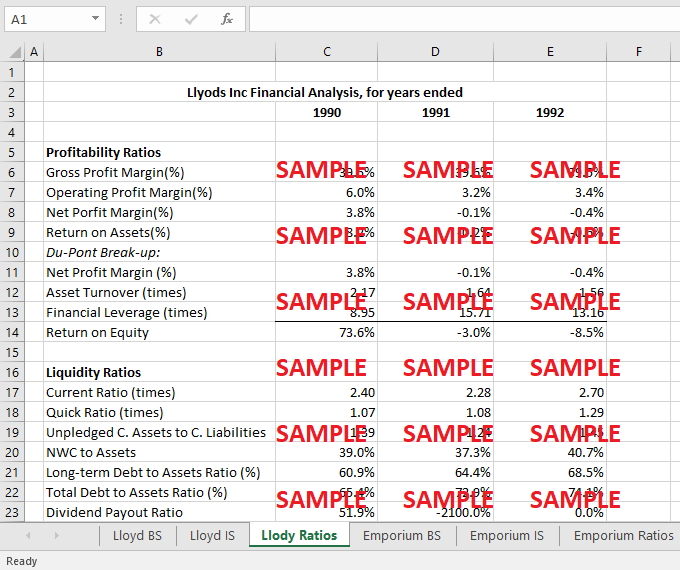 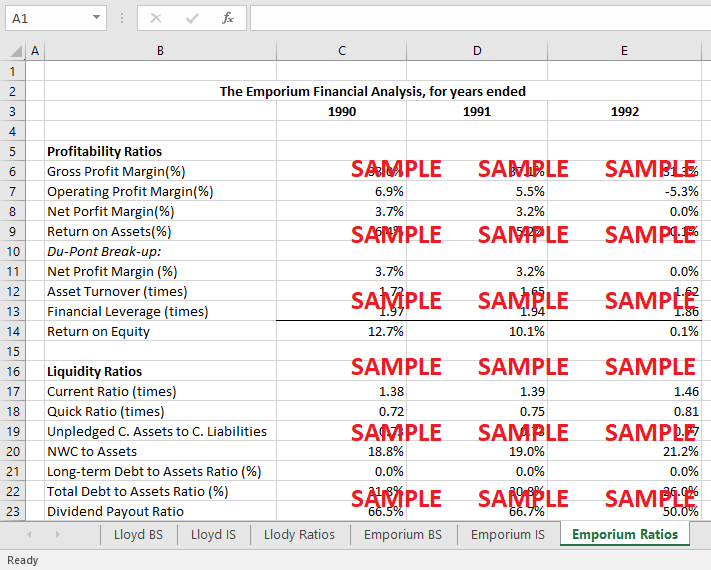 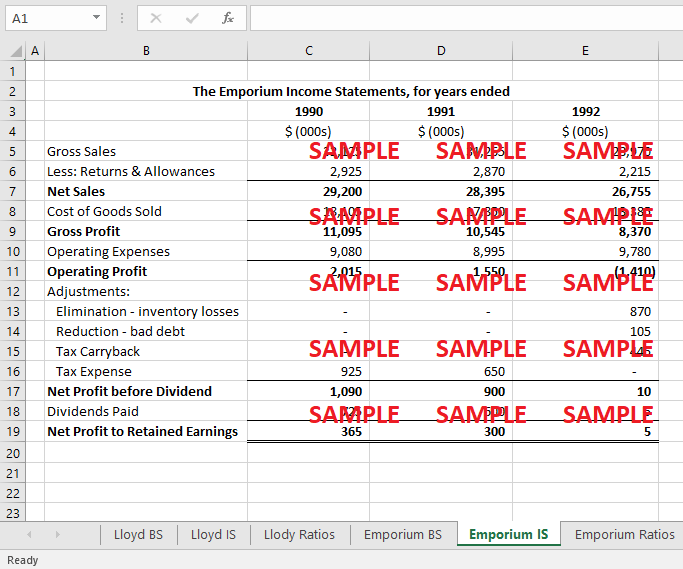 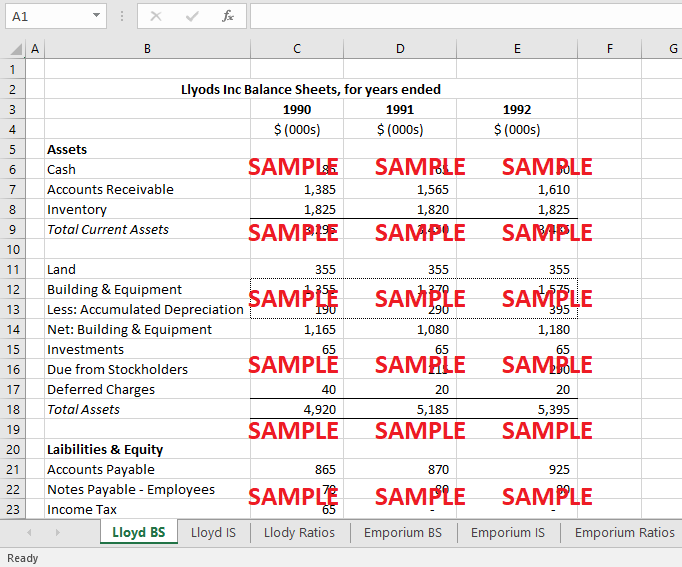 Lloyd is a retailer of high quality home furnishings and operates from three different locations. Lloyd has been a customer oh Quality Furniture for over thirty years, and has always paid its obligations on schedule. The company makes 25% of its sales on credit. The credit is repaid through periodic monthly payments of receivable over a period of six months. The performance of Lloyd’s credit account has been satisfactory throughout 1991, but a further decline in demand during 1992 might put things under a different dimension.

The balance sheet and the income statement for Lloyd Inc for the last three years are presented in the spreadsheet. The company’s total assets have increased steadily over the past three years. The current assets are significantly greater than the current liabilities, which imply a comfortable level of positive net working capital. The investment in fixed assets such as building and equipment has been steady, offsetting the aggregate depreciation expense over the three years. However, the balance sheet shows some signs of financial trouble. The long-term debt obligations of the company are quite high, and have been increasing steadily over the three years. Moreover, the retained earnings of the company have decreased over the three years, indicating negative retained earnings over the period. This necessitates a closer look at the income statement of the company over the same time horizon.

It is clear that the profitability of the company has deteriorated during the past three years, which is also reflected in its balance sheet position. However, it remains to be determined if this deterioration has significantly affected the ability of the company to meet its credit obligations with Quality Furniture. For this purpose, we need to construct a detailed financial analysis of the Lloyd Inc. For clarity of understanding, the analysis has been sub-divided into three parts: profitability analysis, liquidity and solvency analysis, and efficiency analysis.

The profitability analysis is primarily concerned with the performance depicted by the income statement of the company. It utilizes a set of ratios that try to determine the trends in different yardsticks of profit margins and return measures. These returns will help us identify the future direction of the company and its ability to control its expenses and generate a healthy return while its turnover decreases.

Operating Profit Margin is the ratio of the operating profits to the sales. It measures the ‘pure profits’ earned on each dollar of sales. These profits are called ‘pure’ because they only measure profits earned on operations and ignore non-operating expenses as well as items such as interest, taxes and preferred stock dividends. Just like gross profit margin, a higher operating profit margin is also preferred. Lloyd’s operating profit margin decreases from 6% in 1990 to 3.2% in 1991 before slightly improving to 3.4% in 1991. The decrease in the margin during the year 1991 is very significant because the margin decreases by almost 50%, whereas the sales have only declined marginally. This indicates that the company did not anticipate that decline in sales and continued to incur expenses without concentrating on cost cutting. The improvement from 1991 to 1992 is marginal, but it indicates that the company controlled its expenses while sales declined even further during the period.

Net profit margin depicts the percentage of profit we have gained relative to our sales, after accounting for all expenses. Net profit margin, as a general principle, is affected by the level of sales, the cost of goods sold and both operating and non-operating expenses including interest and taxes. The net profits margin has become negative during 1991 and 1992, declining from a positive level of 3.8% during 1990. Comparing this result to the gross profit margin and operating profit margin calculated previously, we find that gross profit margin remained stable with the decline in sales but the operating profit margin and the net profit margin declined considerably. This indicates that the company has not been able to control its expenses during declining sales. The situation could have been much better if the company had anticipated the slowdown in demand and introduced appropriate cost-cutting and efficiency measures.

This percentage denotes how efficiently the firm is converting its investment into profits. A higher ratio is preferred, as a low ratio implies that the company is not able to use its investment in fixed assets to generate considerable profits. This ratio is affected by the company’s current and fixed assets levels and the net income. The current assets and fixed assets of the company have been very stable over the observed time-period, but the net profit has declined drastically. Therefore, the return of assets has declined from an attractive value of 8% in 1990 to a negative amount during the years 1991-92. This is a worrisome sign because the company is not able generate a positive return on its huge investment in assets. If such a trend continues, the company will be better off selling their asset at the net realizable value, and returning the case proceeds to lenders and owners.

A firm may finance its activities with capital generated or long term loan. These are regarded as the equity and debt finance respectively. This ratio represents the return received relative to just the equity part of the investment. The liabilities & equity portion of the balance sheet reveals that a significant portion of the investment comes from long-term loans. The implication is that equity holders will require a high return on their equity capital in order to be compensated for the risk associated with higher leverage. Therefore, the return on equity of 73.6% for the year 1990 may be justified. However, the return on equity drops drastically to -3.0% during the next year, and further declines to -8.5% for the year ended 1992. This drop is a worrisome sign for the equity holders of the company who are already facing a significant risk from the high proportion of debt holders.