Following a merger, Clear Channel is implementing a divesture of a number of its radio stations. Radio One, a radio channel targeting African-Americans, is interested in twelve of the radio station that are part of the divesture. These radio stations are from the top fifty markets within the US, and they represent a significant growth opportunity for Radio One. We estimate the projected after-tax cash flows from the new station, and then use the appropriate discount rate to value the new radio stations using discounted cash flow approach. The value from this approach is also substantiated by employing an independent multiples based valuation. In the end, the values derived from these approaches are compared to suggest an appropriate acquisition price for the radio channels. 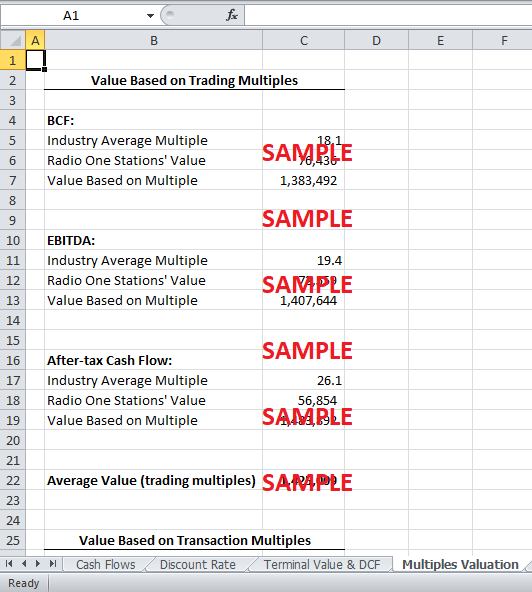 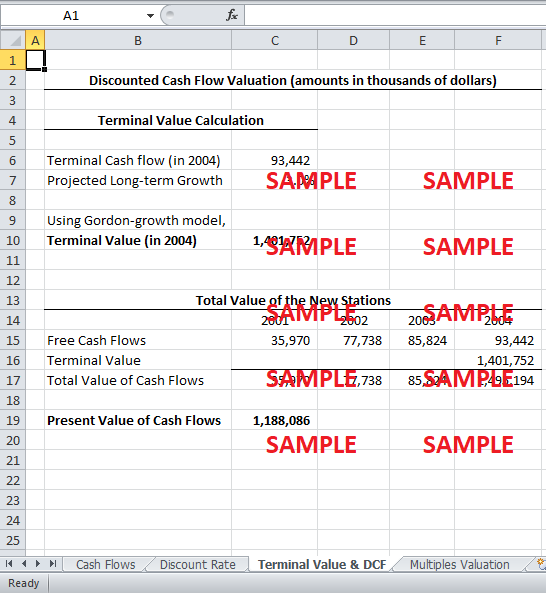 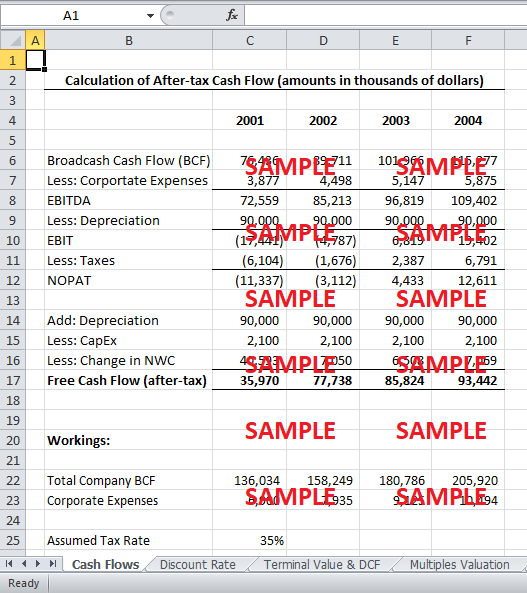 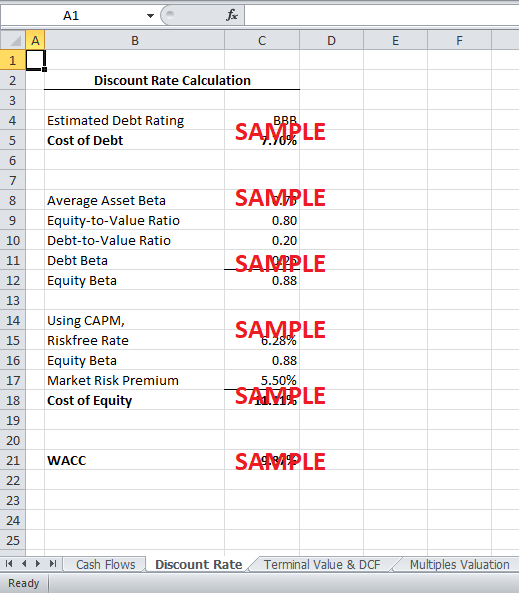 1. Why does Radio One want to acquire 12 urban stations from Clear Channel Communications in the top 50 markets along with the nine stations in Charlotte, NC, Augusta, GA, and Indianapolis, ID? What are the benefits and risks?

Radio One is faced with a rare opportunity to grow through multiple acquisitions of radio stations in the top fifty markets. The window of opportunity has arisen due to an impending divestiture of radio stations by Clear Channel. The divestiture provides the opportunity for Radio One to acquire twelve urban stations, located in the top fifty African-American markets in the US. Even though the company has grown tremendously through acquisitions over the past decade, this situation is unique and has the potential to increase market dominance of the company to a significant extent. The company is also considering the acquisition of nine other stations in separate transactions. These cumulative transactions would double the size of the company and give it a national presence in the African-American market.

The acquisitions are expected to create a larger advertising base geared towards African-American than any other media corporation in the US. Furthermore, the African-American population segment is growing at a higher rate, and their incomes are increasing at a significantly higher rate when compared to the population and income growth of the average Americans. These factors are likely to result in significant revenues for Radio One, following the acquisitions. The acquisitions will also results in cost-savings through economies of scale, reduction of duplicate staffing, and programming syndication. However, it is understood that there are certain risks involved with the acquisitions. This acquisition is a large transaction that would result in a drastic increase in the size of the company. The acquisitions would double the number of radio stations controlled by Radio One, increasing complexity the complexity of operations. The inability of the management to cope with these changes could potentially lead to inefficiency and losses. Moreover, since the company recently engaged in an IPO transaction, it might have to arrange further capital through debt financing which will raise the leverage ratios of the company. Nevertheless, if the management is confident about its ability to effectively handle the larger size of the company, the acquisitions promise to augment significant value for the company’s shareholders.

2. Are the cash flow projections for the potential new markets reasonable?

The broadcast cash flow projections from the new radio stations represent a greater proportion of the total projected broadcast cash flows of Radio One. Since the number of new stations is approximately equal to the company’s existing stations, it is possible that the cash projections from the new stations are higher because they are over-estimated. However, the new stations are based in the top fifty markets for African-Americans. Therefore, it is realistic to assume that advertisers would be willing to pay more for these markets and revenues from new markets are expected to be higher than the revenues from existing markets. Nevertheless, the projected cash flows from the new stations represent a huge portion of the total cash flows and any miscalculations can have grave consequences for the total value of the company. Therefore, caution should be exercised in estimating these cash flows.

The after-tax cash flows can be calculated by adjusted the broadcast cash flows for additional items that affect cash flow. These subsequent calculations are shown in the attached spreadsheet. The net broadcast cash flows (BCF) have been provided in the case study. The earnings before interest, taxes, depreciation and amortization (EBITDA) can be calculated by subtracting corporate expenses from BCF. The total corporate expenses for the company are allocated to the new stations with net BCF as the allocation base. The earnings before interest and taxes (EBIT) are obtained by deducting depreciation and amortization from EBITDA.  It has been mentioned in the case that the depreciation and amortization for the new stations amount to $90 million. The net operating profit after tax (NOPAT) can be obtained by adjusting the EBIT for taxes. In the absence of any conclusive information, it has been assumed that effective tax rate for Radio One is 35% – the statutory corporate tax rate in United States.

4. What discount rate is appropriate for valuing the after-tax cash flows?

The measure of after-tax cash flow – FCFF – represent the cash flow attributable to both debt and equity holders of the company. Therefore, the discount rate should also be a weighted average of their required cost of capital – the weighted average cost of capital (WACC). To calculate the cost of debt, we need to estimate the appropriate credit rating for the company’s debt. The historical solvency position of the company has not been ideal because debt represented a significant portion of the total capital, and operating profits were barely able to cover interest costs. However, with the recent equity offering (IPO), the proportion of debt in the capital has decreased to approximately 20%. Moreover, the new acquisitions are expected to boost the profitability of the company, improving its interest coverage ratio significantly. Following these changes, the company may be able to obtain any additional borrowing at a favourable rate. Therefore, the appropriate cost of debt is estimate to be consistent with a BBB credit rating.

5. What terminal value should be used to estimate the value of cash flows beyond 2004?

6. What price should Radio One offer based on the discounted cash flow analysis?

The yearly cash flows and the terminal cash flow can be combined together to estimate the total cash flow associated with the new stations. These cash flows can be discounted at the WACC to calculate the present value of these cash flows. This present value is the estimated value that is expected to be derived from the stations following their acquisition. The calculations in the attached spreadsheet reveal that this value is estimated to be close to $1.2 billion. This is the maximum price that Radio One should be willing to pay, based on discounted cash flow analysis.