Spike’s Indoor Beach Volleyball and Rock Climbing Inc. caters to a niche market in the Canadian sports industry. As there were no indoor beach volleyball courts in Canada, Spikes faced little competition. The volleyball crazed locality of London; Ontario provided the perfect geographical location for the operations of Spikes. In addition to indoor beach volleyball courts, Spikes had also added an indoor rock climbing wall, a small restaurant with a bar, and had also upgraded the lighting, heating system, computer servers and had added a big-screen television in the lounge area. Spikes did face some competition in the rock-climbing wall division as there were 2 other competitors in the vicinity who offered similar services at comparable rates.

Holistically speaking, the business was doing immensely well and faced little or no environmental threat apart from the fact that the premises were not owned by the business itself. It was leased from another person and was constantly at risk of zoning laws banning the establishment as it was labeled as a high intensity residential area. This meant that the lease owner could cancel Spikes lease at any reasonable notice and construct high-rise apartment buildings in its place; however, Spikes reasoned that since there was no pressure from the neighborhood he would not face too much risk in this regard. As it is, the cost of a potential lease cancellation cannot be quantified and will affect the going concern of the business.

Apart from that the business is in a very healthy condition, having around 130 regular teams per season that feed its main operations i.e. volleyball and Spikes have engineered various complementary services to squeeze more revenue out of its main operations which is mainly the restaurant bar and rock-climbing wall. 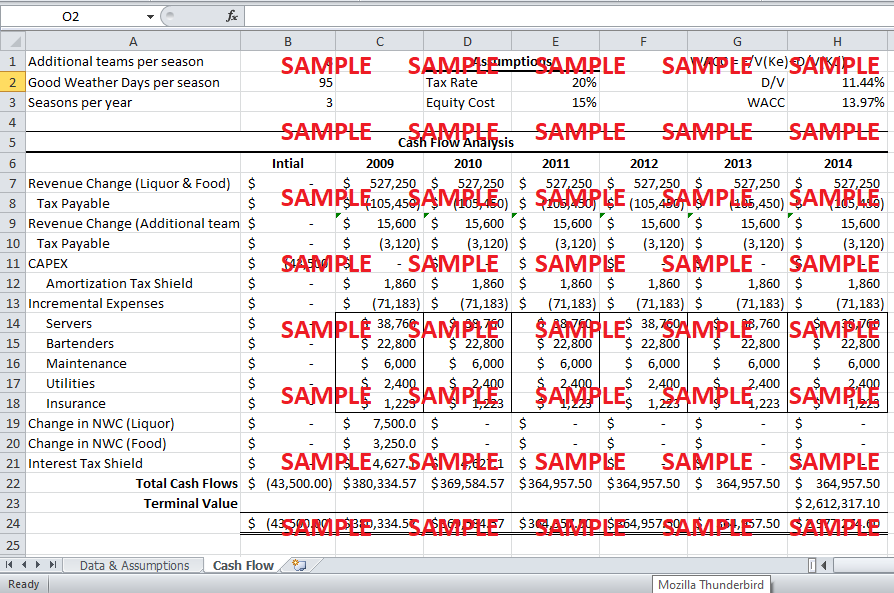 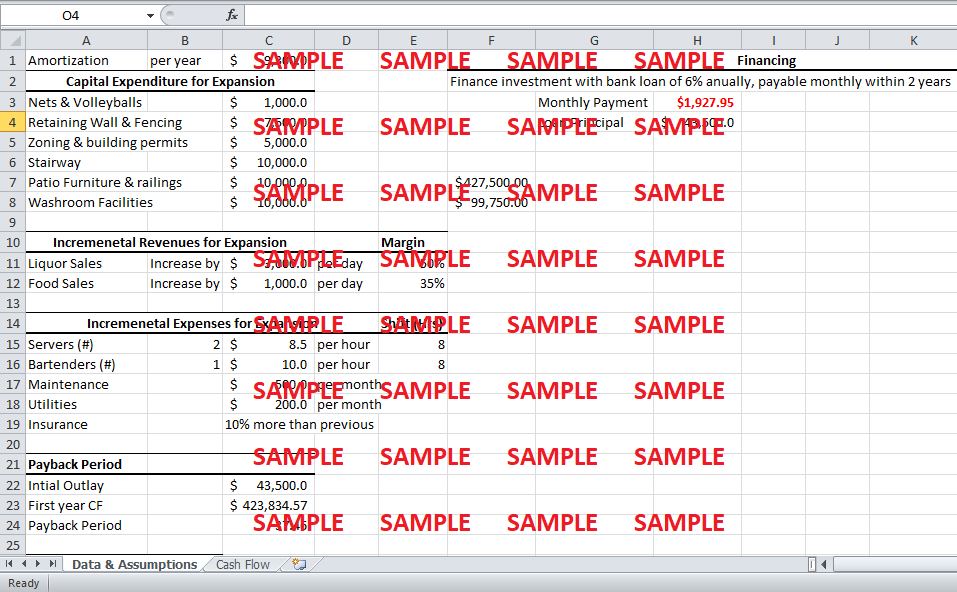 The main aim of Misener was to encourage more people to stay after volleyball matches and games via the outdoor patio. Additionally the outdoor patio would be directly over the new outdoor beach volleyball court hence would create an area for the audience to sit, enjoy a match along with some drinks and refreshments which eventually will increase revenues and popularity. Having a 200 person capacity will provide enough room for spectators to enjoy a match without any congestion. Additionally, Misener has estimated that there will be 95 good weather days out of 120 days per season during which the patio can be open which implies efficiency of around 80%. Having an extra court meant that four matches can be conducted per day meaning that Spikes can cater to around 8 more teams on a daily basis which will increase their operating revenues.

The downfall of constructing this patio was that Misener was already facing a risk of his lease being cancelled, and if the business were to construct an outdoor patio, residential complaints might increase as it will cause noise disturbance as well as littering from the patio. Spikes was in no position to face residential complaints as it could push his lease towards cancellation and he would have to locate another suitable premises to operate from which could essentially destroy his business.

Lastly, the estimates provided by Misener are very optimistic and would require analysis from different projections to ensure that the expansion does remain viable in all possible scenarios.

List all the cash flows associated with the expansion, and classify them as relevant (cash, future and different), recurring or one-time costs.

Perform a differential analysis, with sensitivity analysis where necessary. What is the return on investment? What is the payback period?

In the attached file, there are calculations of relevant cash flows and their different impacts on the expansion analysis. The capital expenditure of the first year comes out to be about $43,500 which is financed via a 6% loan with monthly payments. Amortization of $9,300 per year will be charged to depreciate the capital expenditure which yields a tax shield (20% tax) of $1,860 annually. The per month interest payment comes out to be $1,927.95 and the entire loan will be paid off in two years. As a result, the annual interest tax shield comes out to be $4,627.1 for the two years during which the loan is active. The first incremental revenue will come from 8 additional teams playing per day in the new outdoor court. Charging a per season fee of $650 per team, the total increment in revenue from increased teams is calculated to be $15,600 per year. According to Misener, due to the rooftop patio, liquor sales will increase to $6000 a day implying a $3000 revenue increase per day. Assuming 95 days in a season of 120 days during which the patio will be open and active. As, there are 3 seasons in a year the total incremental revenue comes out to be about $427,500 of profit per year. Applying similar calculations to the increase in food sales of $1000 per day yields Spikes additional profit of $99,750 per year. As these are profits before taxes, the company will need to pay taxes which are a cash outflow. Assuming a 20% tax rate, the annual tax payable from incremental revenue comes out to be $108,570.

There will be some incremental operating expenses which are a direct consequence of running the patio. Firstly 2 additional servers will be hired for 8 hours a day at $8.5 per hour, and another bartender will be hired for 8 hours a day at $10 per hour. This comes out to about $61,560 per year after considering the 95 operating days per season assumption. Maintenance and Utilities will be paid at $500 a month and $200 a month which yields $8,400 for the whole year. Insurance will increase by 10% per year which, after considering last year’s insurance of $12,225, comes out to be $1222.5. The bar will have to keep inventory of Liquor and food of 5 days and will pay back the suppliers in 10 days, which will decrease our net working capital by $10,750 (calculations in excel).