Spyder Inc manufactures and market advanced ski gear for ski professionals. Founded by a national ski champion, the company has grown considerably over 26 years of operation. The company is currently privately owned by three partners. One of the partners is CHB Capital - a private equity firm that has realized its expected return from the company and wants to sell its share. The ageing founder of the company, David Jacobs, is also contemplating a sale in a bid to retire. The company has been valued using the discounted cash flow approach as well as the multiples approach. The common value from each of the valuation processes has been estimated using a football field chart. The value is estimated to be between $140 million and $180 million. The decision of David regarding the sale is also an important consideration. If David decides against selling the company, CHB would be forced to sell the company to a financial buyer (another private equity firm) and would have to adjust its valuation for a minority discount. From a financial perspective, it is a great opportunity to sell the company as it is enjoying a high growth phase and the stock market conditions are favorable. However, David is also influenced by other non-financial considerations that add complexity to his decision. 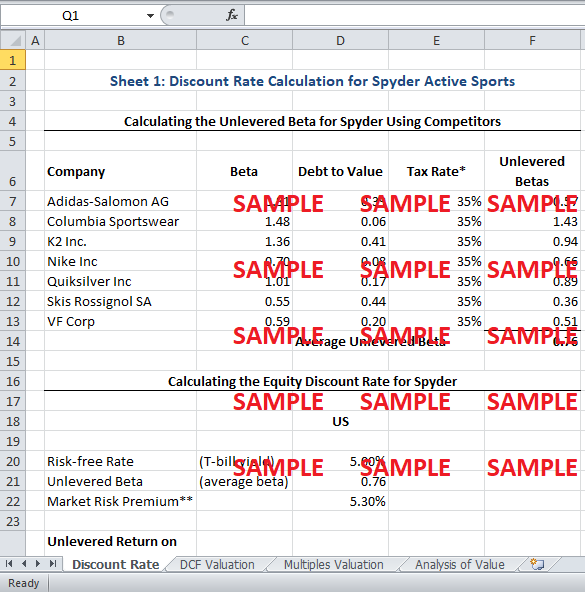 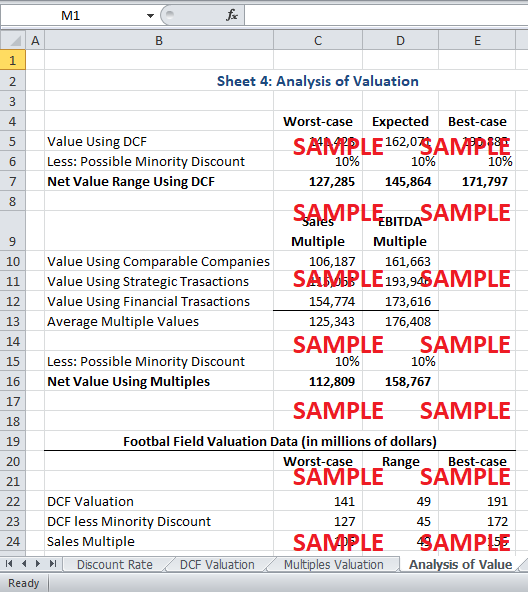 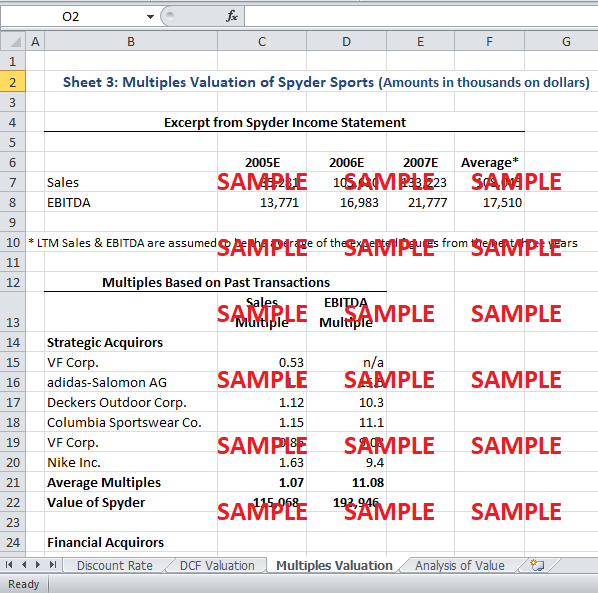 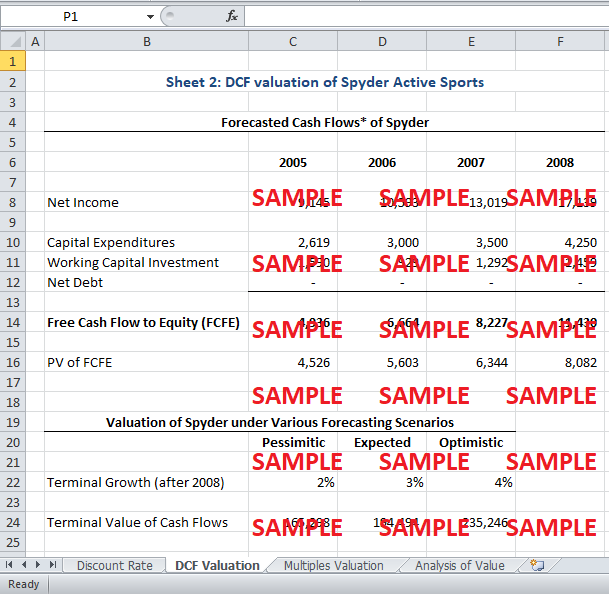 Spyder Inc was a privately owned company founded David Jacobs in 1978. Being a national ski champion, David focused on manufacturing technical ski gears for professional ski racers. The company was started from the owner’s house and orders were filled through mail order catalogues. However, the company grew quickly and David took on a partner in 1982 when there was a need for larger capital base. The company continued to grow and achieved a milestone in 1988 when it secured the sponsorship on the national US ski team. David involved his son in the design of the outfits after his son gained considerable training for the job. The company faced another challenge in 1996-97 when other established companies tried to penetrate the territory of Spyder – the technical ski gear market. The company had achieved stagnancy and needed to grow further in order to be competitive. Spyder took on a private equity partner – CHB Capital – in a bid to raise more capital for expansion. The company hired a new marketing executive and adopted an aggressive approach. The strategy worked as Spyder grew at a phenomenal rate. Currently in 2004, the company is at a crossroads as CHB Capital is looking to exit the business after realizing the expected return from the venture. David also has to decide if he wants to retire and exit along with CHB or continue to be associated with the company that he built. Since the company is privately owned, the owners are not sure about the appropriate bid price for the company and need to come up with an estimate of a fair price.

The partners were not in a position to sell their stakes through an IPO. The company was still quite small to be sold through an IPO. Moreover, the sales of the company were highly seasonal where majority of the sales occurred in summer months while the sales in January were virtually non-existent. The exclusion of IPO meant that the company could only be sold to a private buyer. This included two types of buyers: strategic buyer and financial buyer. A strategic buyer normally operates in a similar line of business as Spyder. Such a buyer might want to acquire Spyder in order to realize synergies from the greater scale of operations. On the other hand, a financial buyer is a financial institution. For instance, another private equity company – similar to CHB Capital – might want to invest in Spyder. The motivation behind the acquisition of a financial buyer is not to realize synergies but to generate a required rate of return by associating with the business for a medium-term time horizon. If David decided against selling his share of the company, CHB Capital will be forced to sell their share to a financial buyer. This is because CHB holds a minority share in the company and a strategic will not be interested in buying a minority share since they will not have control of the acquired business. In such a case, a financial buyer will also demand a minority discount on their acquisition price, as they will not be able to exercise their decisions without the consent of other partners.

It is important for the owners of Spyder to have a rough estimate of the value of their company. Such an estimate will enable to better judge the tender offers from any prospective buyers. One method of calculating the value of a privately held company like Spyder is to use discounted cash flow analysis. The first and the foremost step in the DCF valuation process is to calculate the appropriate discount rate. The discount rate is the rate at which the cash flows of the company should be discounted to obtain their present value. Spyder is mostly equity financed. Therefore, a useful approach would be to calculate the cash flows to equity and discount them at the required return on equity. Consequently, the required return on equity needs to be calculated.

The return of equity can be calculated using the Capital Asset Pricing Model (CAPM). CAPM views discount rate as a measure of systematic risk and adjusts the discount rate for each company based on its beta. Therefore, the determination of an appropriate beta is at the heart of calculating the equity discount rate. The betas for the competitors of Spyder have been provided in Exhibit 11 of the case study. These are levered betas since the most of the competitors have debt on the balance sheets. The data can be used to calculate the unlevered betas for each of the competitors using the Hamada’s equation. The Hamada’s equation requires tax rate as a necessary component during the process of unlevering the betas. The tax rate has been assumed to be 35% for all of the companies. This is consistent with the statutory tax rate for the US. Sheet 1v in the attached spreadsheet shows the process on unlevering the betas. The average of the unlevered betas of the competitors is assumed to be the beta for Spyder. Since Spyder has negligible debt, there is no need to re-lever the beta. Other required inputs to calculate equity discount rate under CAPM are the risk-free rate and the market risk premium. For the risk-free rate, the t-bill yield is assumed to be an appropriate proxy. In the US, the long-term yield on t-bills roughly equals 5%. The appropriate risk premium can be selected from studying the historical stock returns for a major index within the US. Recent surveys suggest that the appropriate market risk premium is around 5% in US (Fernandez and Baonza, 2010).

The free cash flow to equity (FCFE) can be estimated using the information provided in exhibit 5 of the case study. The forecasted net incomes for each of the years need to be adjusted for capital expenditures, working capital investments and net debt of the company. The net debt is zero because company is not issuing or retiring any debt in the near future. The data for forecasted capital expenditures and working capital investments of the company is also provided in exhibit 5. Sheet 2 in the attached spreadsheet details the calculation of FCFE for Spyder. The forecasted data is only provided till the year 2008. After the year 2008, the company is assumed to grow at a constant rate. The constant growth rate is expected to be around 3%, but it is also taken to be 2% under a pessimistic scenario and 4% under an optimistic scenario. This gives us three different estimates of terminal values, using the Gordon-growth model. Adding the present values of free cash flows and terminal value gives us an expected value of the company. Under DCF analysis, Spyder is expected to be worth approximately $160 million. This value is expected to vary from $140 million to $190 million under pessimistic and optimistic growth scenarios.