The Acquisition of Consolidated Rail Corp. (A) Case Solution

Consolidated Rail Corporation (Conrail) is a major player in the freight segment of the Eastern rail network with a market share of 29.4%. It has almost monopoly power over the rewarding Northeast rail network, which has routes connecting the major Northeastern cities with Midwestern region. Conrail can be a viable target for CSX for many reasons. For instance, the consolidation of overlapping operations of the two companies could not only lead to significant cost savings but also increase revenue through the provision of improved service. Currently, Conrail is the least efficient railroad company in the Eastern region. It faces strong rivalry from trucking, which has a principal portion of the Northeastern freight market. It is estimated that the cost reduction could yield as much as $370 million in annual net income by the end of the century. Similarly, the projected revenues are also expected increases by an additional $180 million on an annual basis. 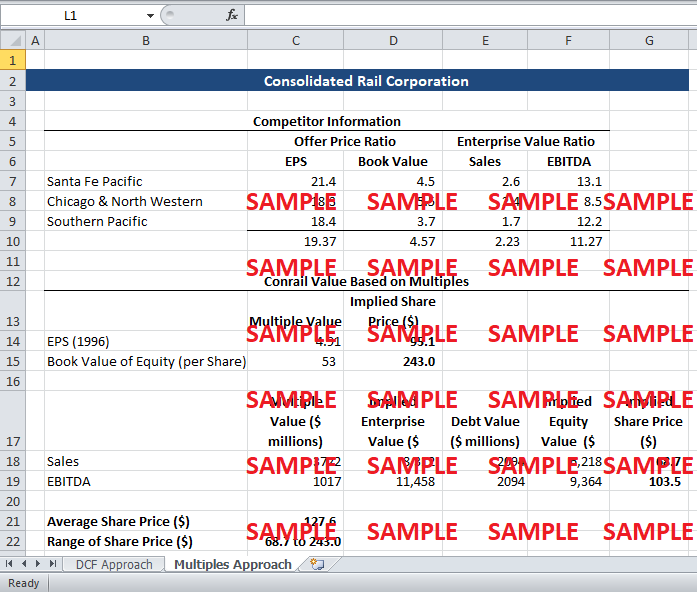 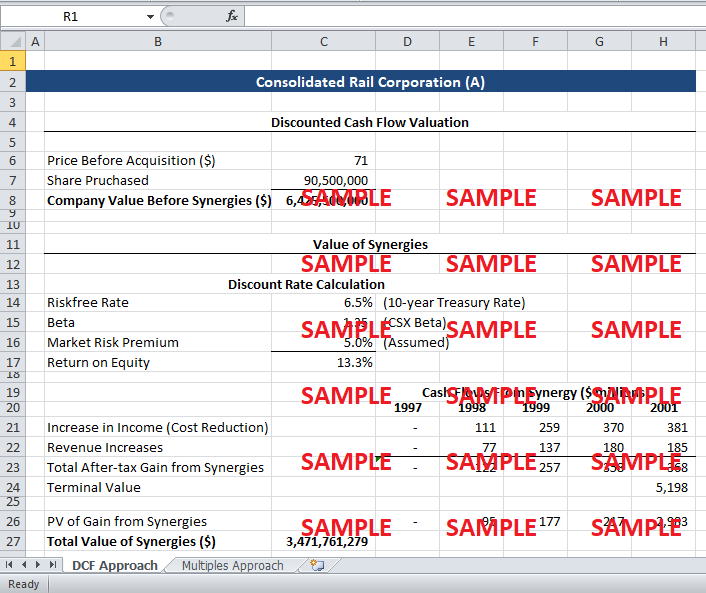 Case Analysis for The Acquisition of Consolidated Rail Corp. (A)

Moreover, the merger would result in a significant improvement in the competitive position of the consolidated company. It is important to note that CSX’s rail network connects 20 Southeastern and Midwestern States as well as the Canadian Province of Ontario. On the other hand, Conrail has significant control over the entire Northeast rail market. Therefore, the combined rail networks of CSX-Conrail would assist long haul, contiguous, and low-cost service among the Northeast, the Southern ports, and the Midwest. Furthermore, CSX faces tough competition from Norfolk – the third largest Eastern railroad company. Norfolk also lacks access to the Northeast market and is not able to efficiently service long-haul routes from its area of operations. Therefore, it might also be looking to make an acquisition bid for Conrail. Norfolk had also shown interest in purchasing Conrail when the government was privatizing the company. Thereby, the acquisition bid by CSX could a preemptive attempt to prevent companies like Norfolk from purchasing Conrail and gaining market dominance.

The discounted cash flow approach as well as the multiples approach has been employed to determine the acquisition price that CSX should be willing to pay for Conrail. The rationale behind the discounted cash flow approach is that CSX should be willing to pay a maximum of the current market value of the company and the present value of the synergies expected to be realized from the merger. The current market value can be determined by multiplying the pre-merger market price ($71) of Conrail’s shares with the total dilutive shares outstanding (90.5 million). The expected increase in cash flows resulting from synergies is also provided in the exhibits of the case study. These cash flows have to be discounted at the appropriate discount rate. It is argued that these surplus cash flows could be classified as additional cash that is available to equity shareholders of CSX. Therefore, the cash flows should be discount at the required return of equity for CSX. The required return of equity can be determined by employing the Capital Asset Pricing Model (CAPM). To apply CAPM, the risk free rate is estimated to be equal to the 10-year treasury rate, the market risk premium is assumed to be equal to 5% (an estimate of the historical average premium), and the beta for CSX is determined from the information provided from the case study. Using this required return on equity as the appropriate discount rate, the total value of the synergies is estimated to be almost $3.5 billion. Therefore, according to discounted cash flow model, the total market value of Conrail (for CSX) is $9.9 billion, with a share price of $109.4.

We have also used the merger transactions is the recent past to estimate the value of Conrail implied by those transactions. The past transactions include five different companies. However, the transactions include two acquisition offers for the company Santa Fe Pacific. Santa Fe rejected one of its offers and accepted the providing the higher acquisition price. The multiples implied the rejected offer are lower than the offer accepted by the company. This raises the suspicion that the rejected offer may reflect a lower acquisition price than the worth of the company. Based on this reasoning, the multiples of both companies with rejected bid offers are not taken into consideration when calculating the implied value of Conrail. The multiples used are price to earnings, price to book value, enterprise value to sales, and enterprise value to EBITDA. An average of these multiples from the recent transactions is used to calculate the implied value of Conrail. It should be noted the earnings per share, as well as book value per share, data for Conrail can be used to directly calculate the implied share price for the company. On the other hand, the enterprise value multiples provide as estimate for the total value of the company. The value of long-term debt has to be subtracted from the enterprise value to calculate the value of equity (cash holding are assumed to be zero). The value of equity is then divided by the number of shares outstanding to calculate the implied share price. The multiples approach give a wide range of share price for Conrail, ranging from as low as $68.7 per share to as high as $243 per share. However, the average share price implied by the multiples approach is $127.6, which is higher than the value calculated under the discounted cash flow approach. Due to the large range of values generated by multiples approach, it is believed that discounted cash flow valuation is more reliable.

Analyze the structure of CSX’s offer for Conrail. Why did CSX make a two-tiered offer? What effect does this structure have on the transaction?

CSX made a two-tiered offer where, t he offer was further split into two stages, the front-end-offer and the back end offer. The front-end offer was a cash tender offer for 40% of the outstanding shares. Front-end-offer involved an acquisition of 19.7% of the total number of shares at a price of $92.5 per share in the first stage. Whereas, the second stage of first tier was an offer for additional 20.3% of total shares at the same price of $ 92.5 per share. The back-end-offer was a exchange of Conrail’s shares for CSX share, in the ratio of 1.85619:1 (CSX: Conrail). The back-end offer had a lower value then the cash offer, which resulted in a weighted average acquisition price of $89.07 per share. Under a one-tiered offer, the company could not have bought the shares at two different prices because Pennsylvania state law required bidders holding 20% or more of a company’s stock to offer all shareholders the same prices unless target shareholder explicitly voted to nullify this provision. Therefore, the company hoped to nullify this provision by acquiring 19.7% shares in the first stage and then voting on the merger transaction.

The Acquisition of Consolidated Rail Corp. (A) Case Solution