The Talbots, Inc. and Subsidiaries Accounting for Goodwill Case Solution

How to treat purchased goodwill recognized when a firm acquires another firm and pays more than the fair value of the assets for the purchase? Whether the purchased goodwill be amortized or treated as a permanent asset? Or should the goodwill be eliminated soon after the purchase? Or else should the asset be impaired every few years? The case study “the Talbots, Inc., and subsidiaries: Accounting for Goodwill” discusses all the questions mentioned earlier. It recognizes the effect of each treatment on the income, tax expense and share price. It is concluded that due to the non-verifiable nature of the fair value of goodwill calculated for impairment and the different treatments of goodwill, a firm’s management can easily influence the net income by using different treatments of goodwill. However, even though goodwill can be misused it is extremely valuable to report it in the financial statement so that the stakeholders can judge the true situation the firm is facing. 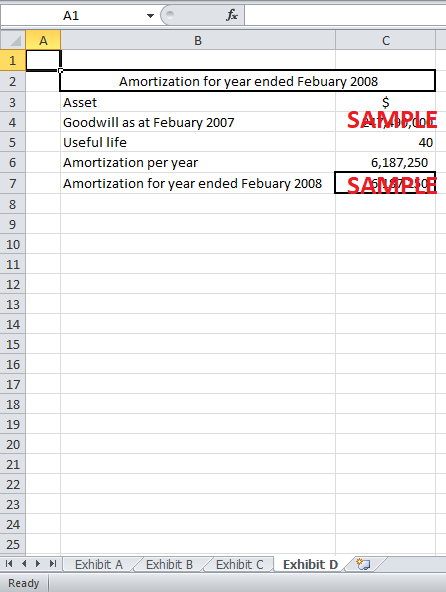 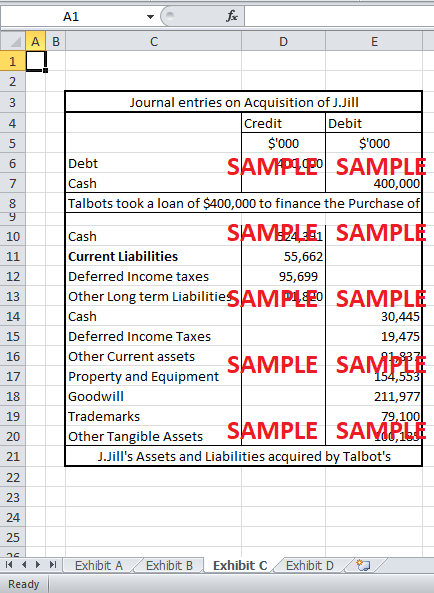 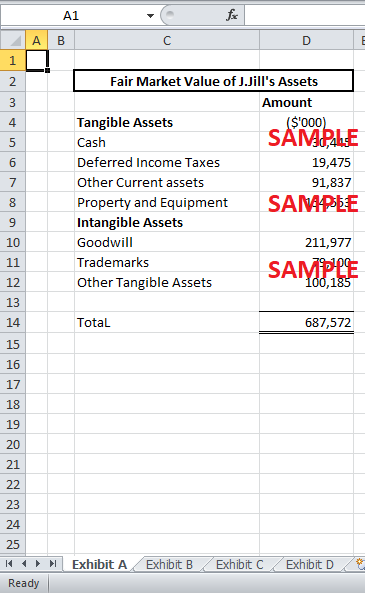 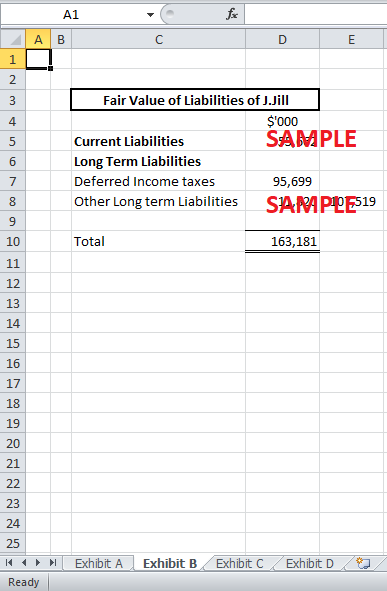 Case Analysis for The Talbots, Inc. and Subsidiaries Accounting for Goodwill

Talbots Inc is a retailer and marker of women apparel, shoes and accessories. It acquired J. Jill, a retailer of specialty women apparel, on May 3, 2006. Talbots Inc purchased J. Jill for a price higher than its fair value. This purchase gave rise to a number of intangible assets and goodwill. Talbots, considering the market situation, must do the appropriate treatment of goodwill and intangible assets.

i. How much cash was paid to shareholders of J. Jill?

Exhibit 1 of the case clearly states that Talbots purchased J. Jill’s shares for a total consideration of $518,320,000. This payment was to be made to shareholders in cash.

ii. How many shares of J. Jill were purchased by Talbots?

iii. What was the fair market value of assets that Talbots acquired from J. Jill?

Exhibit A below shows an extract of Exhibit 1 of the case showing the assets fair market value. It shows that the total fair value of J. Jill’s assets bought by Talbot is $687,572,000.

iv. Why was Talbots willing to pay more than the fair value of the tangible assets acquired from J. Jill?

Talbots paid more than the fair value of the tangible assets when it acquired J. Jill because with J. Jill’s physical assets it also acquires other intangible assets. Intangible assets are those assets which are not physical but can generate future economic benefit for the firm. In Talbot -J. Jill’s case, it mainly includes trademark and goodwill of J. Jill. A trademark is a unique sign used by legal entities to distinguish its products from those of the competitor. Goodwill reflects the value of a strong brand name, sound employee relations, loyal customer base and patents. Using the brand name, Customer base and dedicated employees of J. Jill, Talbots expect to have long-term growth and cost synergies in the future. Moreover, after acquisition, Talbots is able to cater to a larger market segment using J. Jill’s brand name. This is because J. Jill focused on sophisticated casual apparels while Talbots focused on updated modern classics apparels. Therefore, as Talbot expects to gain economic benefits of these intangible assets in the future, it was willing to pay more than the fair market value of the assets to acquire the J. Jill.

v. What were the liabilities (including the $400 million cash obtained through debt financing) assumed by Talbots in the acquisition of J. Jill?

2. What journal entry(s) was required when Talbots recorded the purchase of J. Jill?

Exhibit C shows the Journal entries which would have been recorded by Talbot on the purchase of J. Jill.

3. For Fiscal Year 2007 (ending February 3, 2007), make an estimate of the amortization of goodwill and other intangible assets planned by Talbots when it purchased J. Jill on May 3, 2006?

For Fiscal Year 2007 (ending February 3, 2007), Talbot decided not to amortize the goodwill and other intangible assets that the firm acquired when it purchased J. Jill in May, 2006. However, this purchase goodwill will be reviewed for impairment annually or at times when circumstances signify an impairment of the asset. There will be no amortization for trademarks as per Talbots’ policies. The accumulated amortizations for non-compete agreements, customer relationships and leasehold interests are shown in Exhibit 2 of the case. The accumulated amortization for non-compete agreement is $2,243,000, for customer relationships, $4,723,000 and, Leasehold interest $1,836,000.

4. Using Exhibit 3, estimate the amount of amortization or impairment of goodwill associated with J. Jill for Fiscal Year 2008 (ending February 2, 2008) if Statement of Financial Accounting (SFAS) No. 142 had not changed accounting for goodwill in 2001 and Talbots had chosen to amortize goodwill recognized in the purchase of J. Jill over the allowed period of 40 years?

5. Compare your estimates of income for Fiscal Year 2008 in question 4 to the net loss actually reported after the impairments and reorganization charges taken in FY 2008. Are the differences significant? What would the loss have been without those impairments being recognized?

The impairment of purchased goodwill led to increased expenses for the firm. This is one critical reason for Talbots’ reporting a net loss of $188,841,000. If, the impairment of goodwill had not been recorded the net loss would have been far lower at $54,841,000.

6. Many estimates and judgments were made about the fair value of current assets, property and equipment, and other intangible assets. Talbots might have judged these to have greater fair value at May 3, 2006, which would have reduced the goodwill recognized when J. Jill was purchased. In subsequent years, these greater values would have been depreciated or amortized which would have reduced reported income in those future years and reduced income taxes due. Suppose one half of the goodwill recognized had instead been allocated to fixed assets. How might this have affected income and cash flows in future years? How does this compare with the effects of the impairments recognized in FY 2008 which are not deductible for income tax purposes?

If, however, Talbot uses a different treatment for amortizing goodwill, the income will be affected. A different treatment would be treating half of the goodwill as a fixed asset and the other half as permanent asset. The fixed asset goodwill will be amortized, and the rest would be considered a permanent intangible asset. This would increase the amortization expense in the income statement and the accumulated amortization in the balance sheet. High amortization expense will lead to low income reported in the income statement of operations. Taxes are usually charged as a percentage of income. Hence, as the income is low, the income tax expense will be low leading to tax savings for the management. On the other hand, low income will result into low price of Talbots’ shares. This clearly suggests that management can manipulate net income by changing the treatment of goodwill. It depends on their desired goal as to what treatment of goodwill they will prefer.

In my opinion, the usefulness of financial reports increases with the use of unverifiable fair values in financial reporting. The main users of financial statements are investors, shareholders and creditors. They analyze the financial statement to determine the financial position and profitability of the firm. Therefore, Goodwill and other intangible assets, whose values are unverifiable, play a crucial role in determining the value and prospects of the firm. If, these are excluded from financial statement than the true and fair view of the firm would become impossible. Furthermore, it is only possible to calculate the value of Goodwill on acquisition of a new firm. This goodwill on acquisition is the excess amount paid to acquire the firm over the fair value. Otherwise, it is impossible to measure the fair value of goodwill accurately.

The Talbots, Inc. and Subsidiaries Accounting for Goodwill Case Solution