Adecco SA, one of the world's prominent staffing companies, was looking forward to acquire the staffing of Olsten Corporation. Adecco was a global leader in a staffing industry, and acquisition of Olsten is vital for Adecco's strategy i.e. targeted market leadership. Negotiations had been taking place between the board members of these companies regarding the acquisition. These talks between Adecco and Olsten took a turn for the worse with the rise on the scene of a Dutch staffing company, Vedior. Vedior also showed interest in acquiring the staffing business of Olsten. In the beginning of July, 1999, Adecco and Vedior submitted competing offers for the acquisition of Olsten's business. Olsten's board has decided to meet on July 22, 1999, to evaluate both competing offers. Board members of Adecco were not interested in starting a bidding war with Vedior over Olsten. They decided to revalue the valuation model in the light of importance of Olsten for Adecco US strategy.

The negotiations between Adecco and Olsten took a turn for the worse with the emergence on the scene of Vedior, a large Dutch staffing company, which also showed an interest in acquiring the staffing business of Olsten. In late June, Warburg Dillon Read, on behalf of Olsten, was in talks with both Goldman Sachs, on behalf of Adecco, and with the investment bankers of Vedior. By early July, Adecco and Vedior submitted competing non-binding proposals for the acquisition of Olsten's staffing business. On July 9 and July 14, a special committee of the board of directors of Olsten, consisting of Blechschmidt, Stuart Olsten, and four other directors, met to consider both offers. The board of Olsten was scheduled to meet on July 22, 1999 to consider the sale of Olsten. Bowmer and Weber knew they had to convince Josh Weston and Stuart Olsten, in particular. Though Weber was not interested in getting involved in a bidding war with Vedior over Olsten, he decided to reexamine his valuation model given the importance of Olsten for Adecco's US strategy. 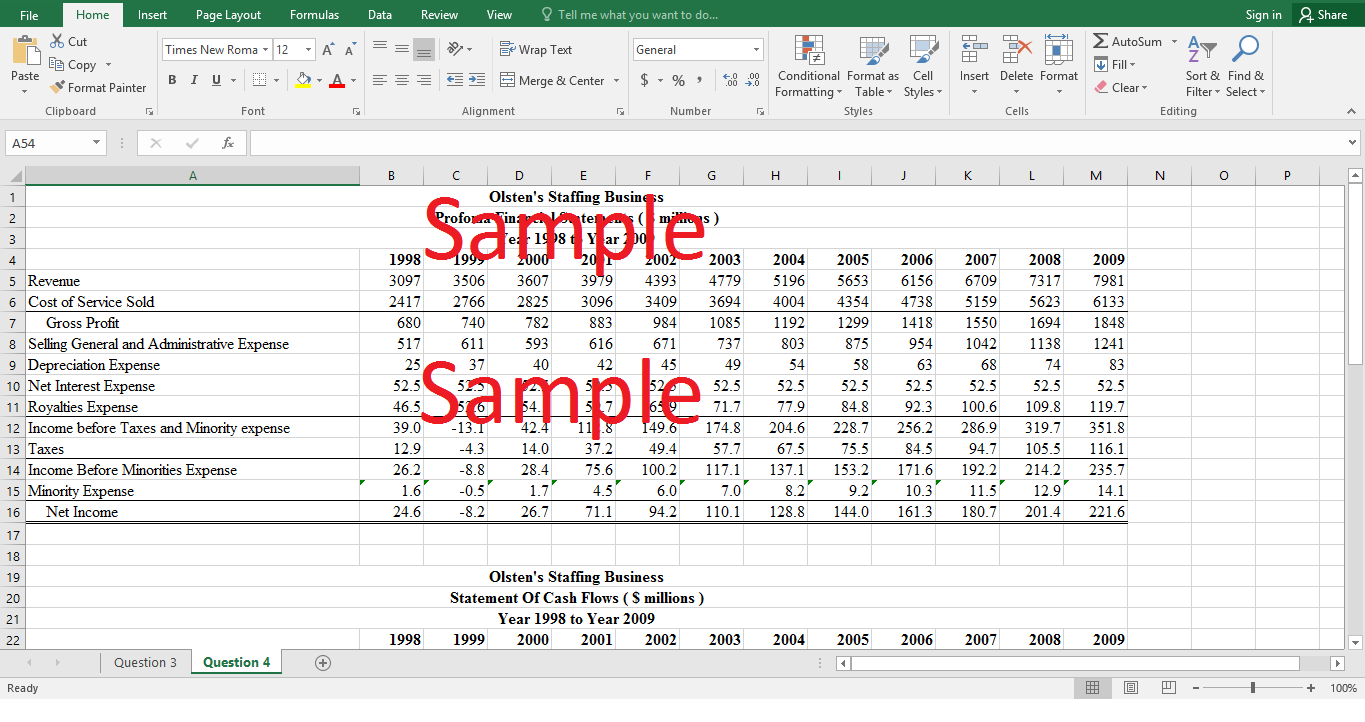 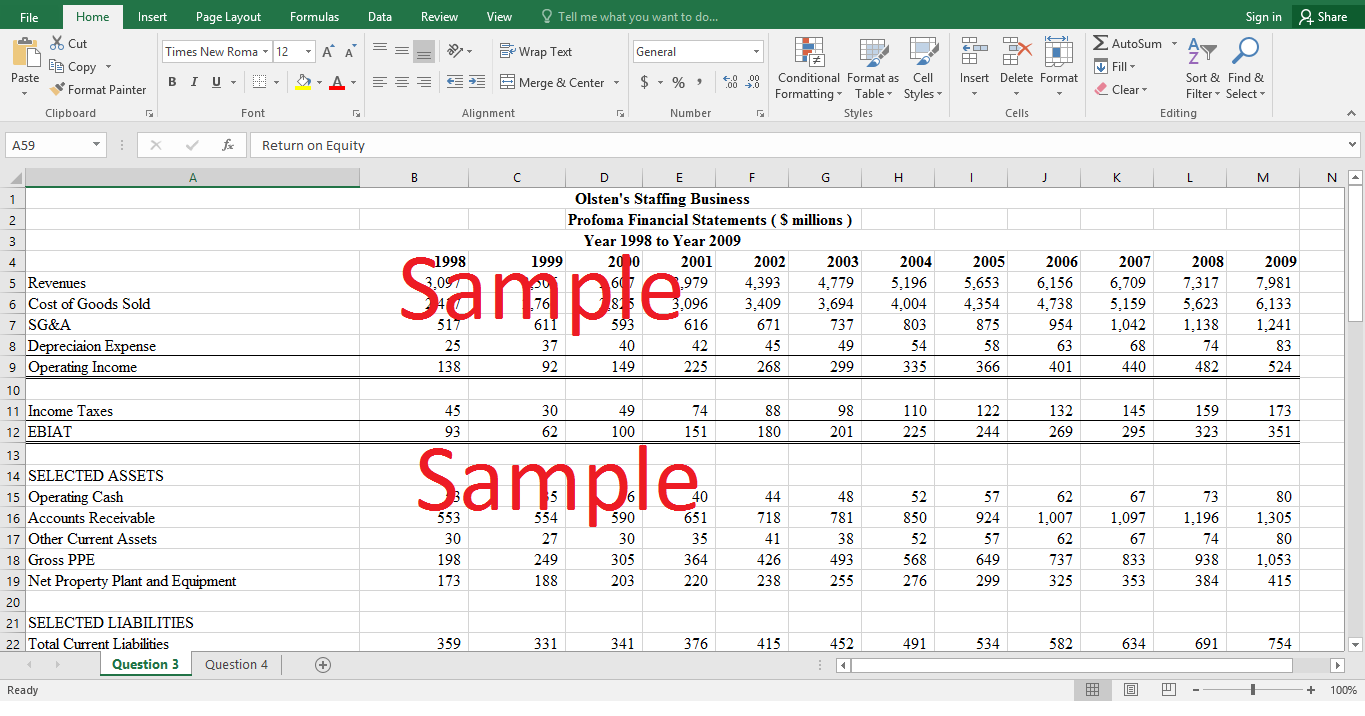 1. How has Adecco been able to outperform its rivals in the staffing industry? What is the strategic and economic rationale for its acquisition of Olsten?

Adecco SA, created through a merger in 1996, had grown rapidly through acquisition and organic growth. Adecco was a global leader in the staffing industry, and its corporate strategy is to achieve market leadership. A consistent strategy is a basis for Adecco aimed at making Adecco outperforms its counterpart in the staffing industry. The first and foremost goal of this strategy was rapid growth in sales to be achieved by gaining domestic market shares organically, as well as, through acquisitions. Historically, in the staffing industry EBIT margin directly relates with a market share. Increasing market share results in high sales growth that ultimately resulted in high total return to shareholders. Hence, in a staffing industry, high market share is the key to outperform rivals, and this is the first goal for Adecco which has made Adecco the leader in almost all staffing industries worldwide. In addition, one of the main drivers of Adecco's strategy was to emphasize on its high standards business segments. Because high-value business segments result in higher margins; hence, 12% sales of Adecco come from IT and specialized staffing.

2. Evaluate Olsten's strategic and economic conditions as of mid-1999, in particular, its funding needs and resources.

Olsten Corporation, founded by William Olsten in 1950, is home health care and staffing firm. The company went public in 1967 and by 1998 the company ranks third among the largest staffing companies in the world with global. The major goal of the corporate strategy of Olsten was to expand its temporary staffing expertise and gain significant market share in home health care. By the year 1998, Health services accounted for about 27% of total Olsten's revenues. In the 1990s, Olsten aggressively expanded its staffing business inside and outside US through acquisitions. Olsten invested more than 150 million in these acquisitions. The situation gets worse for Olsten, the largest provider of home health services in US, when the government had reduced reimbursements and managed care organizations also cut payments for home nursing. Combines with these difficulties, civil and criminal investigations deteriorate the strategic conditions for Olsten. These investigations proved to be a problem for growth in health care business. The purchase of the subsidiaries proved to be more expensive than expected due to medical frauds. Olsten had to invest about 150 million for restructuring and recovery of a health care business and 200 million to complete different earn outs. This high needs of investment certainly require a high level of financing; hence, by the mid of 1999, the Olsten's debt rose to 746 million dollars as compared to 461 million dollars in December 1997.

3. Based on Adecco's pro forma estimates of the staffing business of Olsten in Exhibit 13, what is your estimate of total enterprise value? For this calculation make the following assumptions:

a. Evaluate the valuation from the perspective of Adecco U.S.

b. Assume the acquisition was completed as of January 1, 2000

d. The estimated EBIAT was arrived at without deducting amortization of goodwill.

e. Assume that the Olsten's U.S. rivals (Kelly and Manpower) had a debt beta of 0.2.

f. For this calculation of total enterprise value, do not consider (1) any Olsten debt that might be assumed by Adecco, (2) any payments that Adecco might need to make to minority shareholders of some of its subsidiaries nor, (3) any special tax benefits enjoyed by Adecco SA through its ability to charge Adecco U.S. royalties.

Total enterprise value has been calculated from the pro forma estimate of the staffing business of Olsten keeping in mind the above assumptions. The evaluation is done from the perspective of Adecco US. The cash flows for 1999 are not being used while evaluating as the acquisition was completed as of January 1, 2000. The long term capital structure was assumed to be 20 percent leveraged. Amortization of goodwill is not deducted while calculating EBIAT. The Olsten's US rivals had a debt beta of 0.2. According to exhibit 14 the equity beta for Olsten is 0.98. In order to find the asset risk of Olsten, debt ratio and equity ratio is calculated by taking the average of book value of debt and market value of equity. The values are then put into the formula for finding asset beta i.e.

With the help of equity beta, return on equity is calculated using CAPM model i.e. Re = Rf + βe * (Rm - Rf). Risk free rate is the interest rate of US treasury coupon bond as given in Exhibit 15. Market return is assumed i.e.10%, using the graph of One-dollar invested in leading staffing firms. Return on equity is calculated to be 14%. As Adecco is rated BBB+, the long term borrowing rate, return on debt, for Adecco are 7%. Using these results weighted average cost of capital WACC can be calculated. The WACC calculated for Olsten's Acquisition is 8.95%. For calculation of total enterprise value the future cash flows, calculated using the proforma financial statements made by Adecco SA, are discounted at the rate of WACC. Olsten is assumed to be acquired on January 2000 so the free cash flow of year 1999 is not considered while evaluating the enterprise value. The present values of all the future cash flows are added to find out Net Present Value. Net Present Value of all cash flows is the enterprise value which comes out to be 1016.23 million dollars. In order to acquire Olsten, Adecco SA must bid less than this amount has positive net present value.

4. Value the Olsten acquisition by understanding three important nuances in the valuation:

a. If Adecco was to assume $750 million of Olsten debt, how would this affect how much they would pay for the equity of Olsten's staffing business?

b. Some of the enterprise value we calculated is actually "owned by" minority shareholders in some of Olsten's subsidiaries. How would this affect how much Adecco would pay for the equity of Olsten's staffing business?

c. The case describes a method whereby Adecco U.S. could make royalty payments to Adecco SA. What is the valuation impact of this "imperfection"? To simplify your analysis, assume that the royalties are 1.5% of revenues and value the net tax savings from the perspective of the U.S. firm.

By the mid of 1999, Olsten debt rose to 750 million dollars. Adecco SA would have to repay this large amount of debt and related interest payments after acquiring Olsten. Taking this debt into account, financial statements, prepared by Adecco SA, are needed to be revised. In order to incorporate this debt in the financial statement, interest on the debt is added as an expense in the proforma income statement. Per year interest expense is 7% of total Olsten's debt and is calculated to be 52.5 million dollars. The interest expense decreases the Net income, consequently, negatively affecting the future cash flows and enterprise value. This large amount of debt results in lower enterprise value; hence, it affects negatively on how much Adecco would pay for the equity of Olsten's staffing business.