It was anticipated that a new submarine cable system would be built to expand the capabilities of the sophisticated communication system in international waters. The significance of this brand-new endeavor is the primary concentration of this instance. John Hibbard, managing director of Global Wholesale and a key figure in the AJC effort, was one of the participants. Following the completion of the proposal in 1997, he planned to release the product sometime during the first part of the following year. To provide the public with access to telecommunications services, it was determined that a submarine cable system would be used to lay cables under the surface of the water to bring about the desired result. Because the research demonstrates the importance of the AJC project for each stakeholder, it is necessary for the study to critically analyze the project's benefits and provide information about the project's evolution and characteristics (Esty & Ferman, 2002). 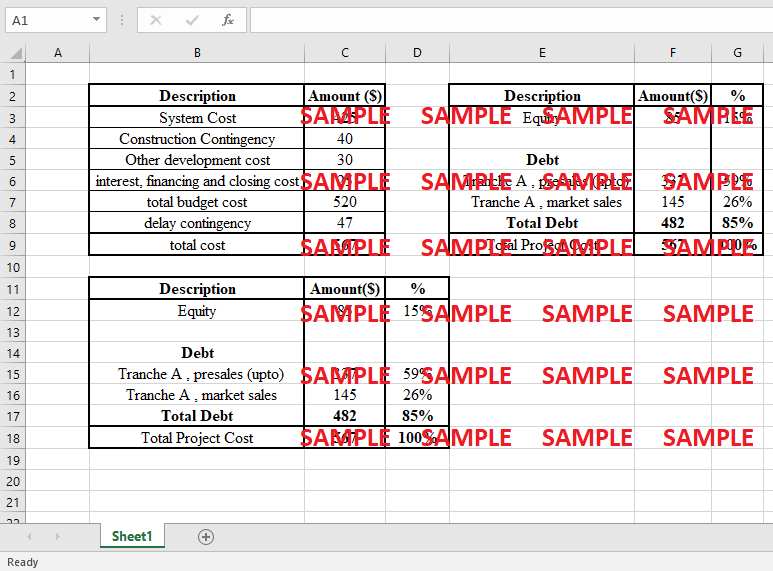 1. How would you characterize the project's assets? What makes them different or unique?

With contingencies, the project's estimated cost rises to $567 million. Capitalization includes all preoperative costs, such as design and interest when a firm begins a new project. As a result, the following is a breakdown of project assets:

The total value of the project's assets is now $567 million. It's not like any other company. In a firm, interest and finance costs are revenue expenditures that are included in the income statement, however, in a project, all project-related costs are capitalized.

Repeaters, transmission equipment, landing stations, and cable-laying ships are among the various assets in addition to transmission optical fiber cable. A debt-to-equity ratio of 85/15 is used to fund the company's assets. The usage of these assets is restricted to a single purpose. Satellite and cable networks are two options for long-distance data transfer. Satellite systems can only transport a fraction of the data that cable systems can. There is an average of one cable failure in a cable's 25-year lifespan, which makes it very durable and trustworthy. In shallow water locations, transmission cable failures are most common. When compared to a looped system, the capital expenses of using a collapsed ring structure are much lower. At $25 million/40Gbps, upgrading traffic capacity to 320Gbps is quite economical. In comparison to SEA-ME-WE3, AJC's new system is larger, cheaper, and more secure for traffic to the United States. It may be difficult to explain and attract funders for such a project because of its high technical complexity. Recharging the signal and connecting to other cable networks in the area are two advantages of laying cables via Guam and utilizing AT&T landing stations. Every 400 kilometers, a repeater is needed to reformat and amplify the signal, which gets attenuated over long distances. Transmission Equipment includes a transmitter, router, and receiving hub. Increasing the capacity is not a difficult task.

To ensure the AJC project's success, Telstra teamed up with Teleglobe and Japan Telecom as its primary sponsors. The following sponsors contributed 15% of the total equity contribution:

It was calculated that a total of $567 million worth of debt would be necessary to fulfill the cash needs since the recommendations offered by ABN AMRO stated that a gearing ratio of 85 percent should be employed. The Sponsors came to the conclusion that using bank loans would provide them with a higher degree of control over the project's finances, therefore they made that decision.

The repayment of the loan was suggested to take place over the course of two installments, which would be as follows:

The potential purchasers' financial commitments were used in order to assist in securing and paying back tranche A.

Tranche B will be repaid using the money that is made from selling more capacity in the future.

If investors wished to maximize their profits while simultaneously minimizing their exposure to risk, it was important for them to minimize both of these threats.

When we speak of "market risk," what we are referring to is the possibility that there will be fluctuations in demand as well as price reductions as a direct result of improvements in technological competence. As a result of the existence of pre-sale contracts with highly recognized businesses covering at least two-thirds of the entire cost (that is, $378 million), it was anticipated that this would be kept to a minimum.

AJC may still obtain cash from flexible financing sources in order to pay for the construction project, even if the process of construction is delayed as a result of environmental clearances and permissions. This risk could be reduced to some extent by several measures.

3. How does the project structure mitigate hold-up problems? Compare against a corporate finance solution.