Jointly owned by Peter and Sally Jeffery, Chef’s Toolkit Inc. was founded in May 1994 to design, develop, manufacture and market the new invention of Peter Jeffery, i.e. a unique household utensil, Pasta Server. They have already patented their invention in the United States and Canada. They have also applied for patent registration in Italy, Germany, France and United Kingdom. Initially, Chef’s Toolkit plans to market its products in Canada, with expansion plans for the US, and Europe after the patent has been registered. 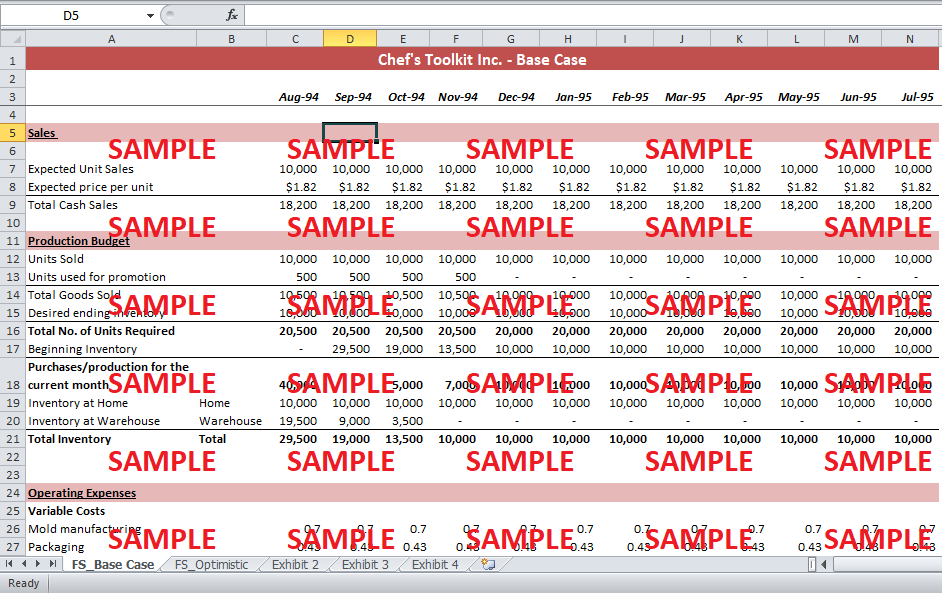 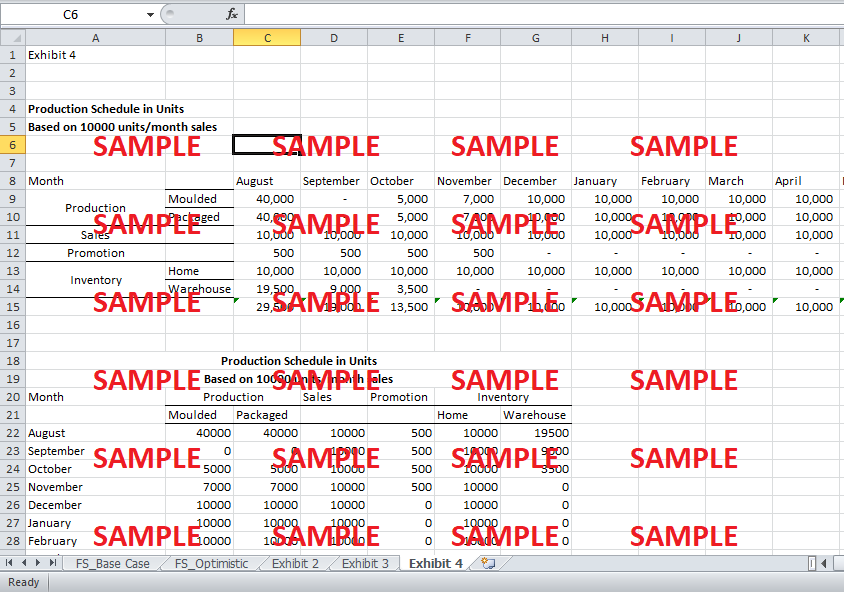 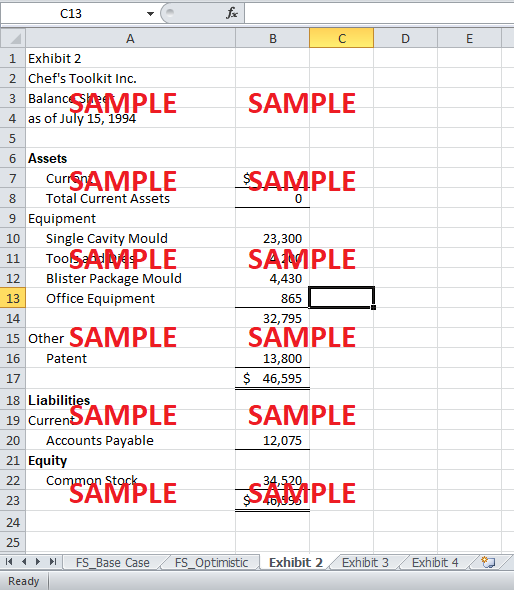 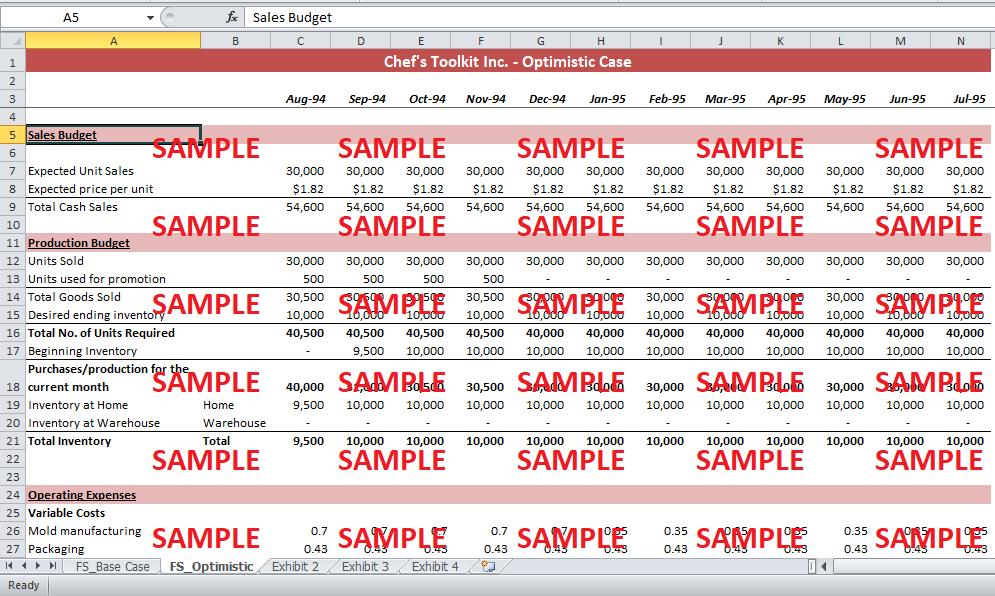 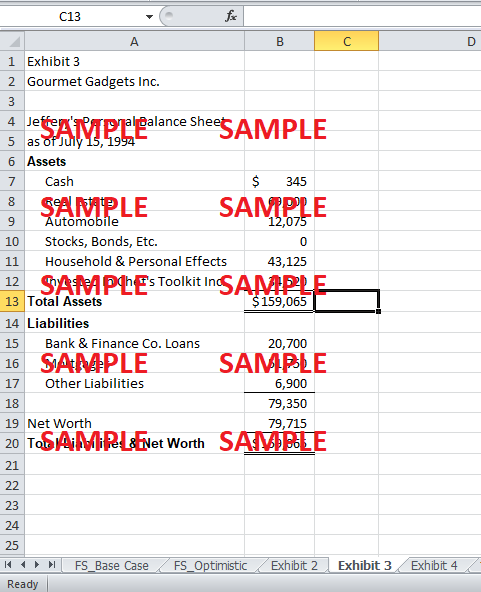 The owners have financed long term assets and patent through personal loans; however, they need additional funding in order to pay the dues on the production mold and to kick start production. After being turned down by banks for further debt, they have been seeking venture, capitalists. Mr. Reid, a venture capitalist, has proposed to finance a maximum of $85,000 for 50% ownership stake in the company. However, before making any commitment, Mr. Reid wants to analyze the pro-forma financial statements of Chef’s Toolkit Inc. in order to gauge the amount of cash needed per month. A detailed master budget including the pro-forma financial statements of Chef’s Toolkit has been developed for the first financial year. The assumptions have been taken as well as the results have been summarized below:

The number of units produced depends upon the expected sales. It has been assumed that in the first month, 40,000 units will be produced to avoid stock out in the first few months. In the base case, since the number of units sold is assumed to be 10,000 while 500 units will be used for promotion. As Mr. Jeffery will be using his garage and basement for storing the inventory which has a capacity of 10,000 units, additional 19,500 units will be stored in a warehouse at a cost of $230 per month. The warehouse will be needed for the first three months until the ending inventory reaches the desired level of 10,000 to be stored at home.

On the contrary, there would be no need for the warehouse in the optimistic case. However, after two consecutive months of sales of 30,000 units, the company will purchase a two-cavity mold that will not only double production capacity but will reduce the production cost to half. Moreover, the depreciation expense will also decrease. The new mold is ordered in October 1994 and will be functional from January 1995.

The production of Pasta Server will be executed by Perfect Plastics for a variable cost of $0.7 per unit. Packaging cost is $0.43 per unit which is to be paid at the time of delivery. Moreover, depreciation is booked based on the number of units produced. Depreciation expense for the manufacturing mold is $0.145 per unit while that for the packaging mold is $0.017 per unit. As a result, the cost of goods sold is $1.292 per unit. Moreover, the shipping expense is $0.085 per unit which is also treated as a variable cost. Furthermore, after the purchase of double cavity production mold in the optimistic case, depreciation expense will fall to $0.062 per unit while the cost of production will decrease to $0.35 per unit.

Based on the above mentioned assumptions, a pro-forma income statement for Chef’s Toolkit has been prepared. Moreover, the tax rate has been taken as 20%. In the base case, the company suffers from a loss for the first four months owing mainly to the warehouse cost due to excess inventory and promotion cost. After the fourth month, Chef’s Toolkit Inc. earns a profit before tax of $105 per month. The after tax profit becomes $84 per month for the profitable months. In the optimistic case, the company is profitable from the very first month with profits reaching $17,564 per month. The cost of goods sold for the month of January 1995 includes 10,000 units at the cost of beginning inventory ($1.292 per unit) while the new units cost $0.856 per unit due to the new mold.