The offer which I will make, to Bogart family would be to go with the merger because it will increase the return on equity substantially for Bogart as well as for Crimson. We have seen depreciation in Bogart’s business and this merger will result in uplifting of the profits through new opportunities provided by the market. I will further explain them the consequences of takeovers of other businesses like AKL. Side by side I will assure them that this merger will add up to the liquidity of the stock they are currently holding. 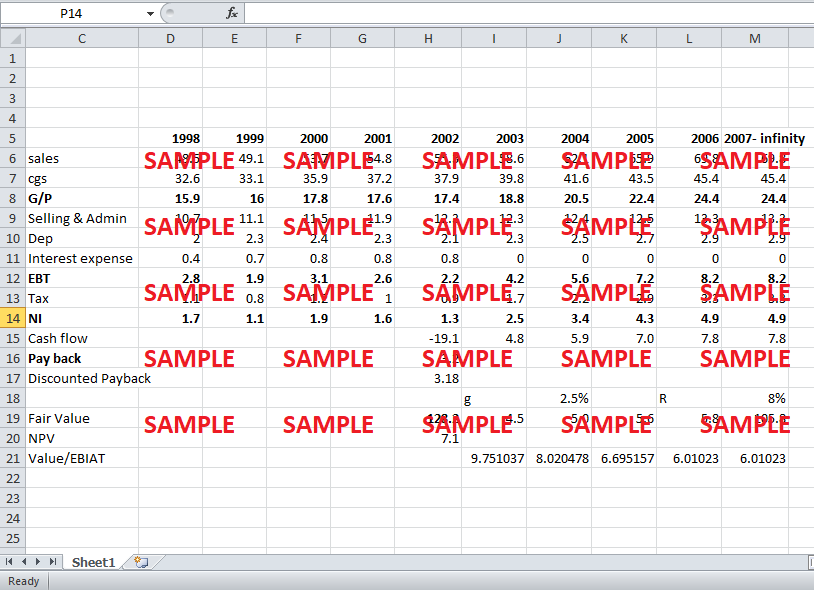 Case Analysis for Crimson Solutions A

1. If you were Mr. Greenstreet, would you try to obtain control of Bogart Inc. in May 2003?

If I were Mr. Greenstreet, I would certainly try to obtain control of Bogart Inc. in May 2003. It will be much beneficial to my company, not in terms of financial valuations. It will also provide me with opportunities to increase sales. As mentioned in the case, Crimson’s capabilities are enough to control the expenses at various levels. Sales expenses will be controlled by reducing overlapping sales staff of the companies. Such actions are expected to reduce general expenses by 3% bringing admin expensive down to 19%. Similarly, Cost of goods sold will reduce by 4% to the value of 65%. These effects will increase profits and will increase Return on Equity (ROE) of the company from 4%.

Three criteria for the acquisition of any company set by Crimpson are as followed:

Bogart Inc. was a company that fulfilled all these criteria. It had covered 50% of the share of clamps a vises market whose value was around $200 million. Similarly, it had captured 9% of the $200 market of scissors and shears. These factors show that Bogart had a strong brand name in the industry.

My existing business will also expand in European markets. 15000 retailers will strengthen my existing business and presence of Crimpson will be in around 140 countries. Along with global expansion supply chain and logistics support will increase for the crimpson’s hand tools range. This will also enable Crimpson to increase its share value because of positive prospects forecasted by Calhoun and his staff.

We can conclude that qualitative and quantitative facts presented in the case are enough to go for the acquisition. Net Present Value (NPV) and other valuation estimates like Discounted Payback, Payback and Internal Rate of Return (IRR) as presented in the next question are also highlighting that Bogart is an exceptional opportunity for Crimpson. This will also be symbiotic relation for both the companies as mentioned earlier. The stock of Bogart will show appreciation and substantial liquidity to the firm as its stocks are being traded on New York Stock Exchange (NYSE).

2. What is the maximum price that Crimson can afford to pay, based on discounted cash flow valuation? Based on market multiples of EBIAT?

Based on the above analysis we can take the decision for acquisition but being finance students we need to do some number crunching. Therefore, we use discounted cash flow valuation model and Net Present Value concept which is based on market multiples of EBIAT. We will be using Total Assets / EBIAT for calculating the market multiples.

The calculations have been shown in the table below.