Dell Computer Corporation was founded by Michael Dell in 1984. The company designed, manufactured, sold, and serviced high performance personal computers (PC’s). Selling directly to the customer was their core strategy. Sales were primarily generated through advertisements in computer trade magazines and eventually in a catalogue. Initially they purchased IBM computers, upgraded them and sold directly to customers, taking orders via telephones.

The computers were built after they receive orders from customers, the so called build-to-order manufacturing process, which helped them in maintaining a low finished good to total inventory ratio.

Dell’s working capital policy, centered on inventory management, had been a competitive advantage which helped them reduce their carrying costs of inventory and minimize the risk of obsolescence of their inventory, as reflected by a low finished good to total inventory ratio.

Dell’s growth in 1996 surpassed the industry averages, which was mainly funded through internal resources. One of the fundamental issues faced by the management was to determine ways by which the company can fund its growth, in the upcoming years. Though, with a company like Dell, it is comparatively easy to obtain debt financing. However, in order to reduce the cost of funding, it is always feasible for a company to finance their growth through internally generated funds.

In order to work out on different scenarios of funding, various assumptions had to be made. Cash flows of the company, based on the given information, comprised of changes in operating assets, changes in liabilities and equity and net income. 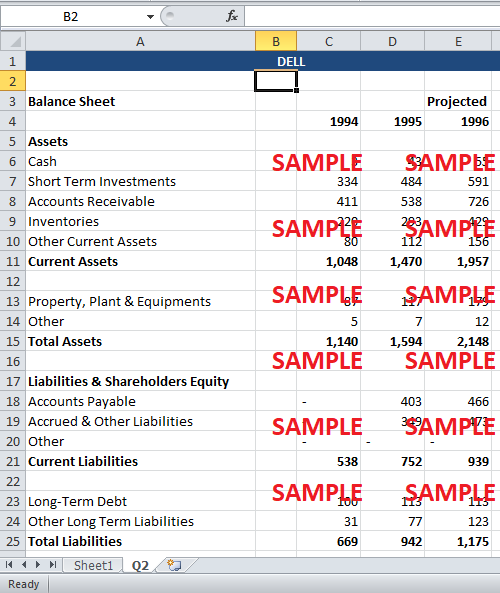 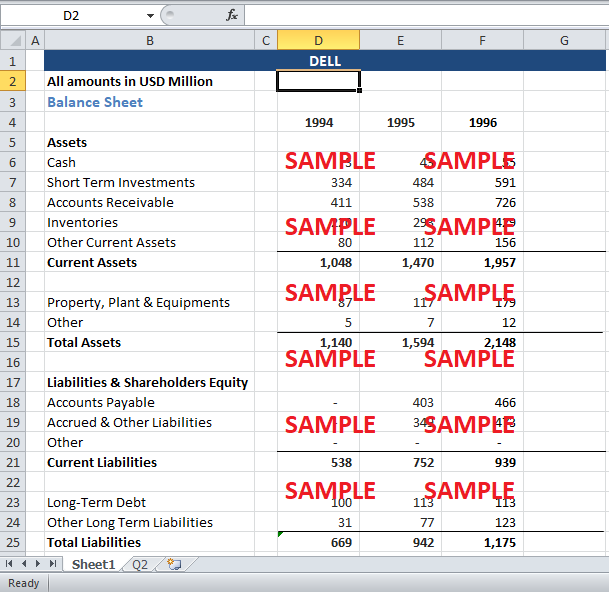 1. How was dell working capital policy a competitive advantage?

The goal of any organization’s working capital policy is to have adequate amount of funds for daily operations while eliminating or minimizing any opportunity costs associated with holding any excess cash. Continuous monitoring of working capital is required if firms want to maintain their competitive advantage within an industry.

Cost leadership implies that businesses aim at producing goods and services at a cost that is much below than their rivals, which will ultimately help to charge a lower price.

Businesses will often try to differentiate their products and services from their competitors to charge a premium for the added features their products would offer. In some cases businesses will focus on one or more product lines and at a particular location, reflecting that specialty in that sector. On the other hand, there will be firms which will adopt a diversification strategy inorder to cater a wide range of market in order to reduce sector specific risk.

Working capital policy of Dell mainly focused on inventory management, in a way that reduced costs. Thus, cost leadership was the strategy adopted by Dell. To achieve optimum utilization of inventory Dell concentrated on selling computers directly to customers rather than through distributors. Moreover, their production of computers was based on the amount of orders from their customers, and not just by mere forecasting. This resulted in lower finished goods to total inventory ratio, which in turn reduced any opportunity cost of holding too much inventory and decreased the risk of obsolescence, the problem usually faced by technology related products.

Whilst, they were holding minimum amount of finished goods in the inventory, Dell maintained an inventory of components, making up 80% of the cost of a PC. Overall this resulted in lower accounting costs and economic costs. i.e. reduced opportunity cost of obsolescence and storage.

However, in 1990 when the company decided to increase the size of their business, they integrated dealer relationships into their business model, with a focus on fast paced growth. After facing restructuring losses in 1993, they again incorporated liquidity and profitability goals into growth strategy making direct customer relationship, once again, their integral part of the working capital policy. The result of which would be seen in sound profitability of the company after 1993, as reflected in their income statements and balance sheets.

Prepared cash flows, depicts that overall there was an inflow of cash during the year, with financing activities contributing most towards the inflow. Three major assumptions regarding financing cash flows are;

On the other hand, operating activities also resulted in an inflow of cash by USD 79 million. These along with inflow from financing activities, amounting to USD 108 million, were sufficient to finance outflows from investing activities, which amounted to USD 169 million.

In summary, most of the contribution came from inflows from financing activities; however, operating activity cash flows also stood positive, depicting sustainability of the company’s profitability.

3. Assuming Dell sales will grow 50% in 1997, how might the company fund its growth internally?

To determine the source of funding for 1997, we only need to analyze major cash flows, rather than breaking them down in terms of operating, investing and financing activities. Only debt financing is considered to be external funding. Accounts payable, can also be considered as external funding, since creditors are considered to be external entities, so they are excluded from the analysis. Moreover, in this, change in equity is being considered as injection from sponsors only, making it to be an internal source.

Assumptions that we need to undertake include constant net profit margin (net profit as % of sales) of 5.136% and operating assets, as percent of sales, of 29.40%. In the absence of any non cash charges, such as depreciation, and other information net income and increase in Equity & Liabilities are accounted for as the only cash inflows.

4. How much working capital need to be reduced and/or profit margin increased?

Reducing working capital would free up tied up cash in excess inventory, will result in reduced trade debts and lower cash balance. In order to determine a precise estimate of the value by which working capital need to be reduced, we need to estimates for Days Sales of Inventory, Days Sales Outstanding, Days Payable Outstanding and Cash Conversion Cycle for the industry.