The case is about Dow Chemicals’ bid for the privatization of Petroquimica Bahia Blanca (PBB). PBB, a producer of both Ethylene and Polyethylene in Argentina, is being privatized by the local government. Dow holds a leading market position in Ethylene and Polyethylene, and wants to utilize this opportunity to expand into Argentina. Dow has developed a three-stage operational strategy for expansion of its polyethylene operations in Argentina. The acquisition of PBB represents the first stage of the strategy and provides a gateway to the second and third stage. The cash flows from each stage of the project have been valued using the discounted cash flow (DCF) approach. The discount rate for the valuation has been adjusted for the country risk premium, and a modified version of CAPM has been used to calculate a best case and a worst case estimate of the discount rate. This gives us a range of possible acquisition values for PBB. Given that the acquisition also enables Dow to benefit from the from the high cash flows of the second and third stage of the project and that other parties are also interested in the acquisition, it is recommended that Dow bids a relatively high price of $280 million for PBB. 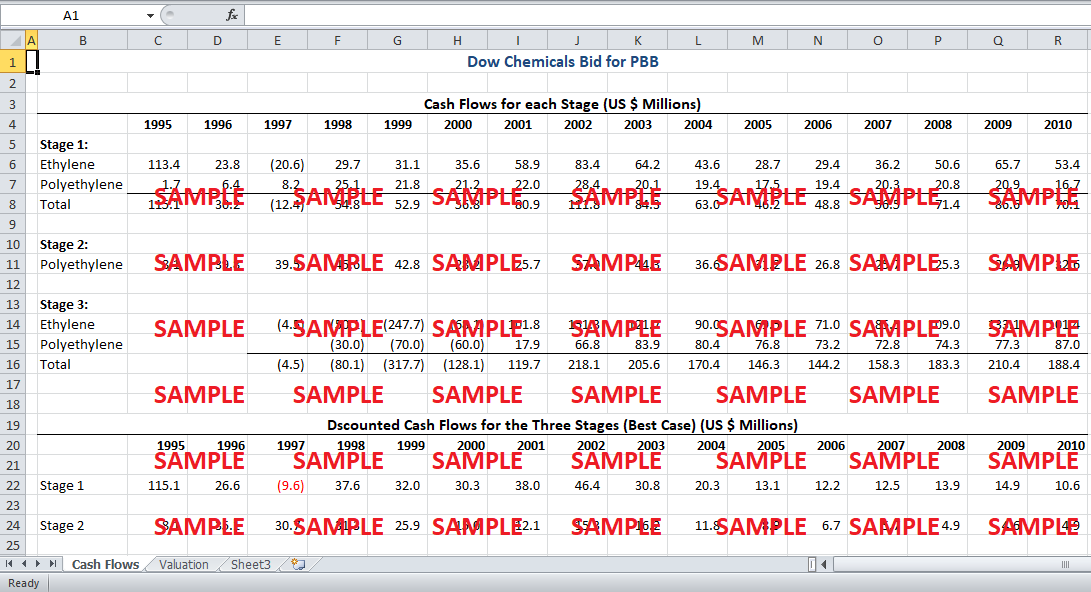 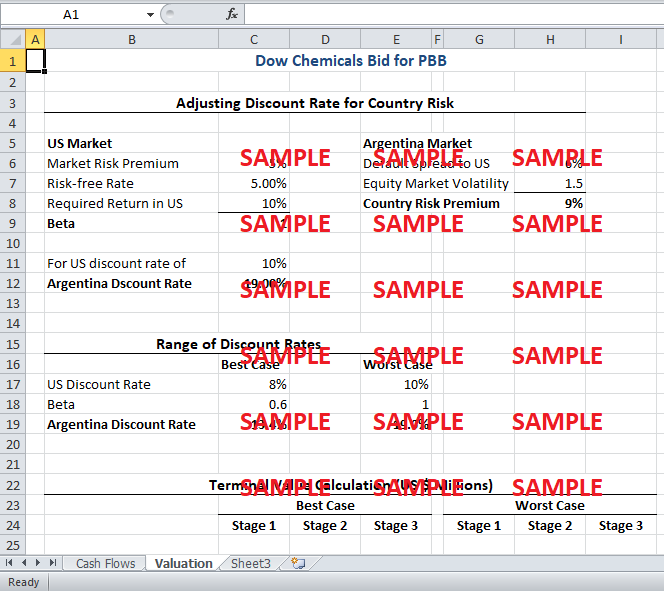 Dow had been interested in the Argentina market since the 50’s when it asked the Argentine government to develop a petrochemical complex. The government developed the complex in the late 70s and this led to the creation of PBB. In a bid to become more open and attract foreign direct investment, the government decided to privatize PBB in 1995. The expected growth of Argentina and the high forecasted demand for Polyethylene made PBB an attractive acquisition. Dow was a multinational company with 94 plants across 30 countries. Dow had a presence in several countries of Latin America, including Argentina. Polyethylene represented about 15% of Dow’s total revenue and roughly 35% of its profits. It saw the PBB acquisition as once in a lifetime opportunity to establish a stronghold in the Argentinean market. Dow faced some competition in its bid for PBB. Copesul, a Brazilian company and Perez Company, a local Argentinean firm, had teamed up to bid against Dow.

There were significant complications with respect to the benefits from a potential acquisition of PBB by Dow Chemicals. Dow expected the cash flows to be generated in three separate stages. The first stage involved an upgrade of the PBB facilities to make them internationally competitive. The second stage comprised of an acquisition of two polyethylene plants. The company would have to negotiate with a private company Ipako that was owned by a local businessman. The stage comprised of building new plants to expand capacity. Dow was looking for a partnership with YPF for the supply of ethane for the upgraded facilities. This deal was crucial to the success of the third stage. The Argentinean market was volatile and the country’s currency had experienced many currency devaluations in the past. Before making a bid, Dow has to decide on country risk premium and exchange rate risk before deciding on an appropriate discount rate for the cash flows.

As far as polyethylene market is concerned, Dow Chemical lacks a strong footing in Argentina. If Dow Chemical decides against operating in a strong growth region like Argentina, it might be risking its leading position in polyethylene. On the other hand, Dow has sufficient operating experience in Argentina through Dow Quimica. The PBB project fits Dow Chemical’s strategy to be a cost leader through horizontal/vertical integration, technological leadership, and global presence. PBB is large Argentinean Company which represents 25% of the total Mercosur production. Due to its economies of scale, its local competitors in Argentina will have a cost disadvantage. If will be difficult for Dow to impose its dominance in the Argentinean market if another company acquires PBB. The three project stages represent a unique opportunity to rapidly build a large scale operation. Nevertheless, there are certain uncertainties involved with the second and third stages. More importantly, the later stages cannot be undertaken independently; they depend on stage one - the acquisition of PBB. Therefore, the acquisition of PBB represents a vital step Dow’s plan to expand into Argentina.

Due to the interests of other competitors and the advantages offered by this unique opportunity, Dow Chemicals has to make a serious bid offer for PBB. The cash flows from each stage of the project have already been estimated. The discounted cash flow (DCF) approach can be employed to discount the cash flows and obtain the intrinsic (present) value of PBB. However, investing in the Argentinean market pose certain risks that need to be taken into account before the DCF approach can be employed. Two of the major risks are the country risk and exchange rate risk. It is believed that the exchange rate risk has substantially subsided because of the recent measures taken by the Argentinean government to stabilize its currency. Moreover, if the company feels that the exchange rate risk is significant at any time in the future, it can hedge this risk by entering into currency futures contracts. Similarly, other hedging techniques can also be employed to minimize the exchange rate risk. Therefore, such a risk does not need consideration when determining the worth of PBB.

Besides the explicit cash flows, there are other factors that might influence the decision of Dow Chemicals regarding acquisition of PBB. PBB has very good competitive attributes: proximity to two of the largest gas basins in Argentina, easy access, proximity to Buenos Aires – the largest market, and good infrastructure and human resources. All these factors will enable Dow to manufacture high quality, cost effective product. The probability of risk from foreign exchange fluctuations is limited and can be hedged. The freight charges and duties are also limited because majority of the product will be sold locally within Argentina. The regulations regarding capital repatriation have been improved and are not expected to change in the future. All of these factors make PBB an attractive acquisition for Dow Chemicals.

The minimum bid, as required by the privatization rules, is $150 million. The intrinsic value of PBB, as calculated by DCF approach is between $384 million and $545 million. However, only 51% of the total value of PBB is being sold, while the remaining 49% will be retained by the government. For a 51% stake, the range of intrinsic values is between around $200 million and $280 million. However, this is only the intrinsic value for the stage 1 of the project alone, Besides giving a 51% claim on the stage 1 cash flows, the acquisition of PBB will also provide Dow with an option to proceed with stage 2 and stage 3 of the project. The value of such an option should also be taken into consideration when deciding on a bid price for PBB.