Reynolds Metals wants to sell its holdings of Eskimo Pie to use the proceeds from the sale to fund its investments in its core aluminum business. Reynolds metals has been proposed two options about its holding of Eskimo Pie, either to be acquired by Nestle for a price of $61 million or to go for an Initial Public Offering (IPO) at an offer price between $14 and $16 a share. In the analysis, both options would be evaluated to recommend the best alternative. First of all, the value of the Eskimo Pie would be estimated using discounted cash flow approach and then by using the valuation through multiples of comparable companies. It would be considered whether Nestle’s bid is worth more than the value of the company and its comparison would be made to the value of proceeds from IPO. Finally, recommendations would be made to choose from acquisition by Nestle or Initial Public Offering. 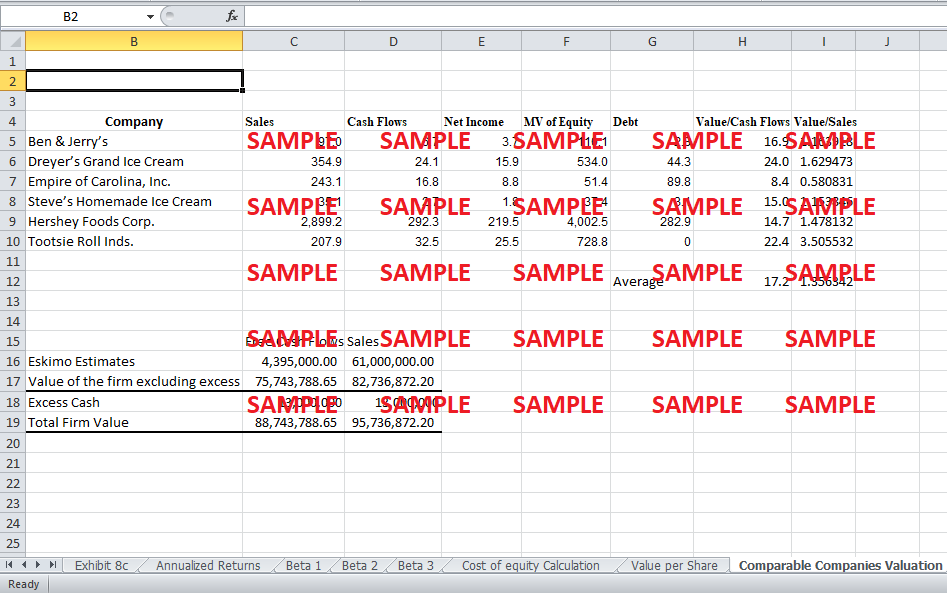 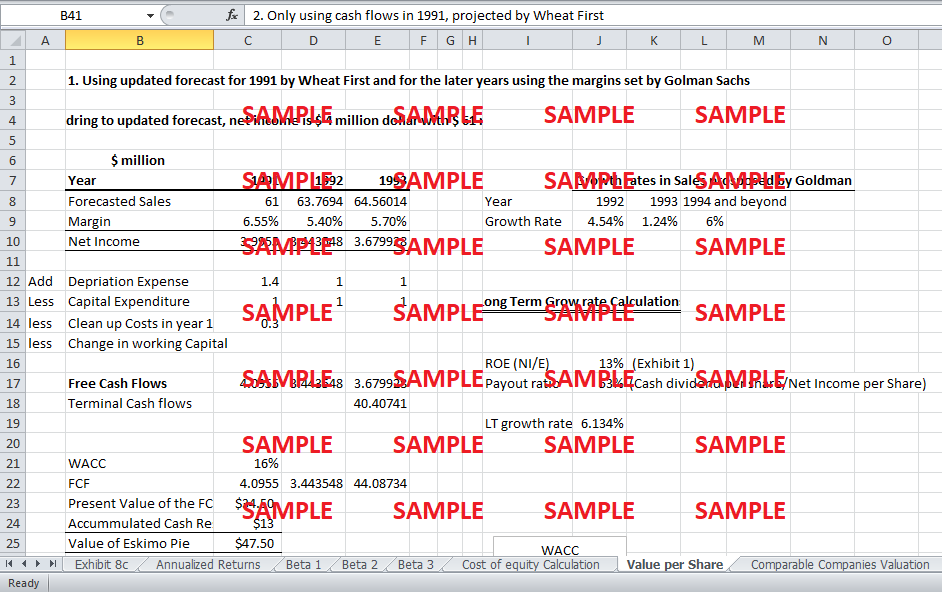 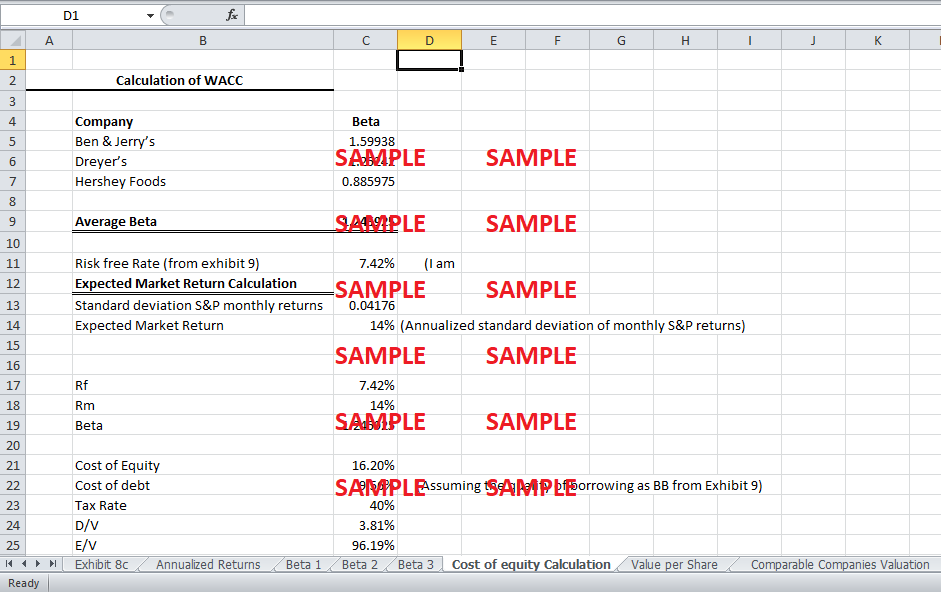 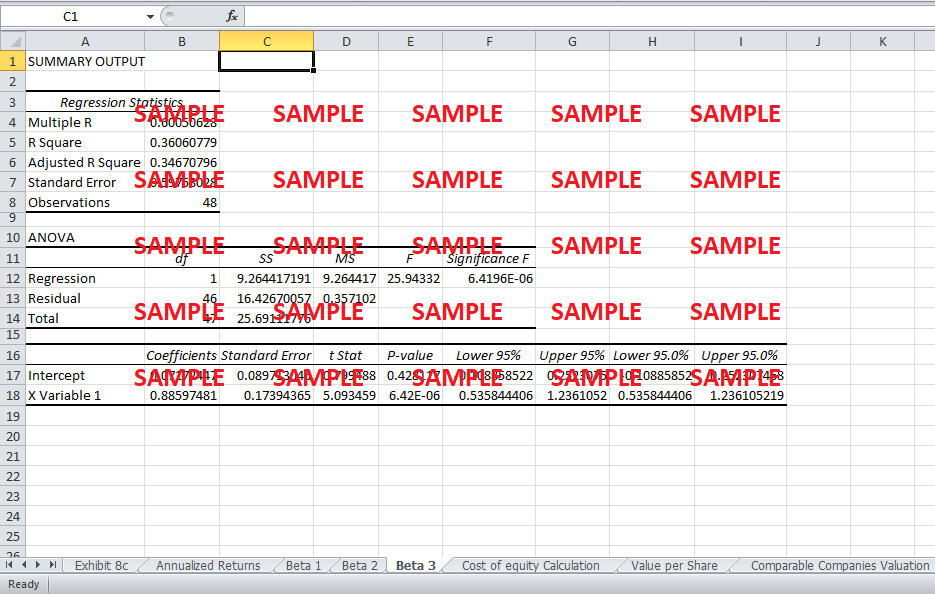 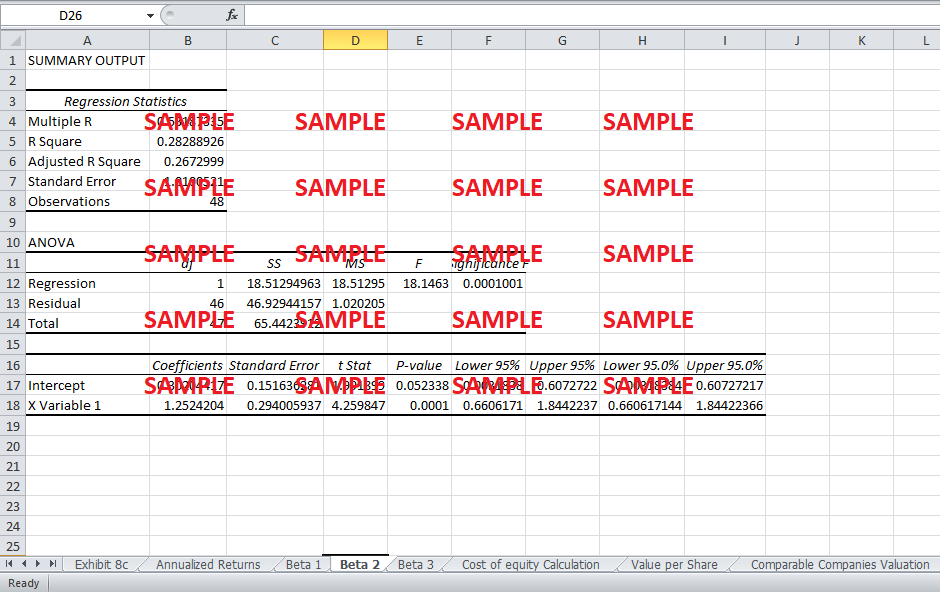 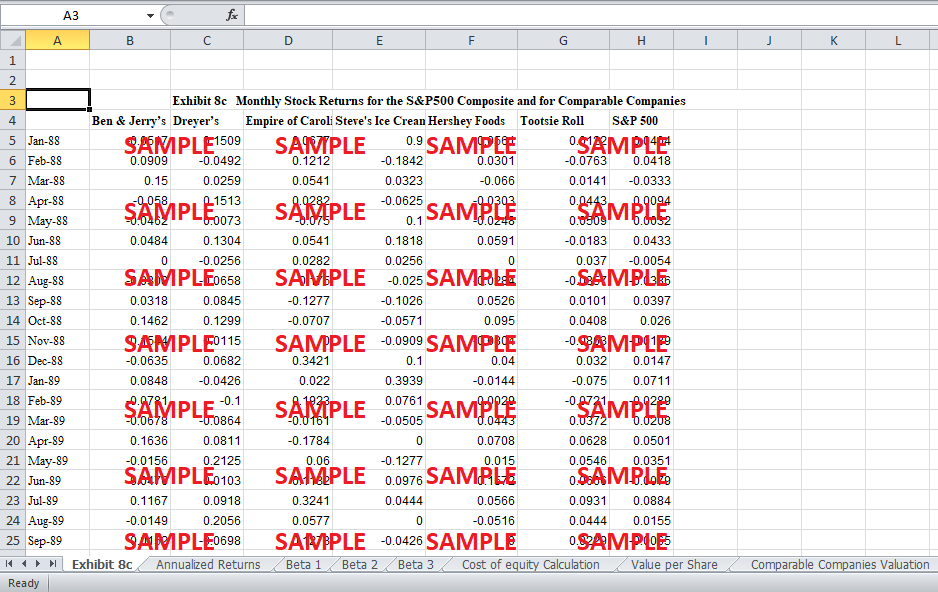 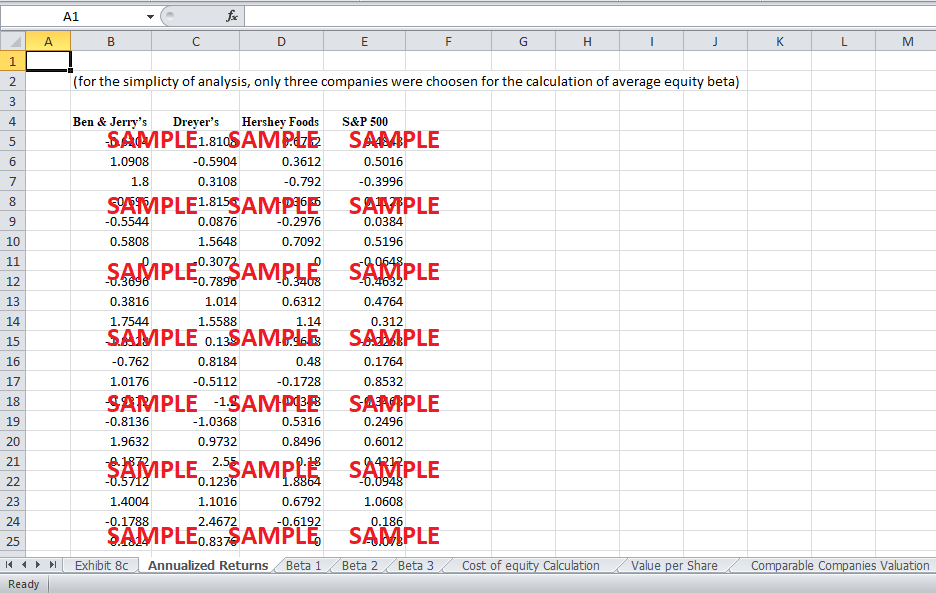 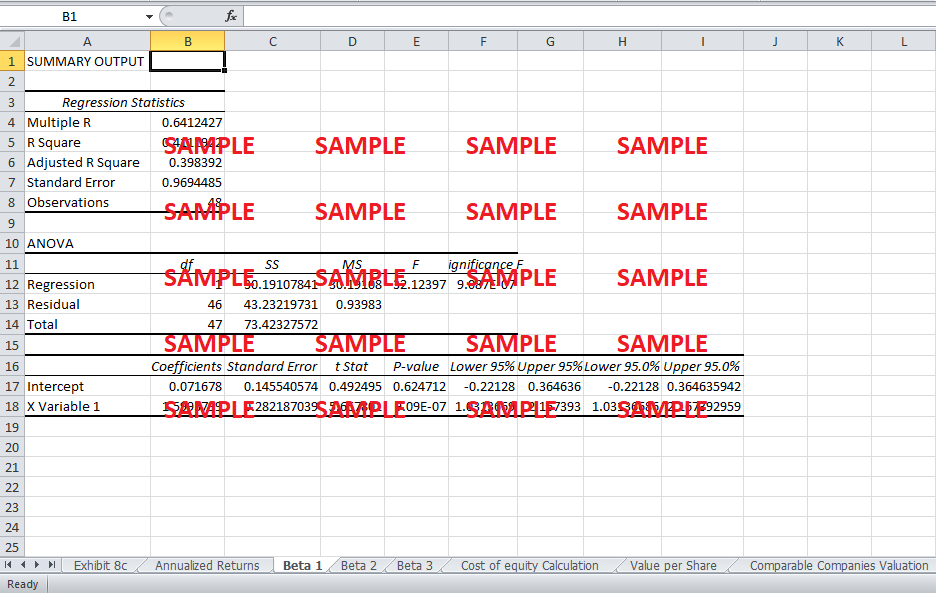 1. What is your estimate of the per share value of Eskimo Pie using the Discounted cash flow approach?

To calculate the per share value of Eskimo Pie, two approaches would be taken based on different assumptions. In the first approach, updated forecast of Income by Wheat First would be included along with the estimates of the margins by Goldman Sachs to calculate the free cash flows for the year 1992, 1993 and beyond. In the 2nd approach, free cash flows would be calculated using the Wheat First Forecast for the year 1991 and then using WACC and long term growth rate, present value of the cash flows in 1992 and beyond would be calculated.

In the first approach, to calculate the per share value of Eskimo Pie, updated forecast of Wheat First has been used which shows that the actual sales are $61 million along with net income of $2,893,000. For the years 1992 and 1993, growth rates in sales projected by Goldman Sachs are being used in calculations. They have calculated the long term growth using sustainable growth formula which comes out be around 6.13%.

Net Income for this purpose has been calculated using the projected margin rates in Exhibit 6. The  capital expenditures were expected to be less than $1 million in 1992, and also Eskimo pie is expecting the cleanup costs of around $ 300,000. Hence, to calculate the free cash flows, these capital expenditure and cleanup costs have been subtracted.

For calculation of the cost of equity, average equity beta is calculated using the monthly stock returns of the comparable companies. For WACC calculations, Cost of the debt is the corporate borrowing rate on BB Long term bond. Discounted value of Free Cash flows is $24.83, and Eskimo also has an accumulated cash reserve of $ 13 million. Hence, enterprise value is $37.83 million. Equity value of the company is $37.08 million after subtracting the long term debt of $744,000. Total numbers of shares in 1990 are 3.316 million. Value of Eskimo Pie comes out be $11.18 per share. Through sensitivity analysis, it is quite evident that, at higher growth rates, enterprise value of the Eskimo pie exceeds $61 million and hence higher value per share.

In the second approach, only using the updated forecast of Wheat First and applying the long term growth rate on the cash flows calculated in 1991, the enterprise value $52 million with the value of $15.63 per share. According to the sensitivity analysis of WACC and growth rates, it is quite evident that value of the company is greater than $61 million at higher growth rates. It can be concluded that forecasts by Goldman Sachs have not projected the healthy growth rates of the company. However, when someone projects the value by using the estimates by Wheat First, certainly the value of the company is much higher and hence a very promising look indeed.

2. How does the value you estimated using discounted cash flow approach compare to the market value of the comparable companies?

First of all, multiples of the comparable companies are calculated using the values of the sales, market value of equity, total debt and cash flows in Exhibit 8b. Multiples like Sales to Value and Cash Flows to Value for these companies have been computed. Averages of these multiples are figured out without the inclusion of the minimum and maximum values of the multiples. Net Income of the Eskimo according to updated forecasts is $4 million while cash flows are $4.395 million. Using the multiples of the comparable companies, value of the Eskimo comes out to be around $76 million and $83 million. As it also has accumulated excess cash of $13 million, total value of the Eskimo pie is $88 million and $96 million according to cash flows and sales multiple respectively.

Goldman estimated that the sale price of Eskimo Pie would be about 1.2 times of 1990 sales, or about $57 million. However, Nestle was the highest bidder with $61 million which is about 1.1 times of 1991 Goldman sales and 1 times of 1991 sales according to the updated forecast. Using the comparable companies, average multiple of the market value of the firm is 1.36 times, which is much higher than that of Nestle.

3. Why would Nestle want to acquire Eskimo Pie? Is Eskimo Pie worth more to Nestle than it worth as standalone Company?

This acquisition would bring multiple synergies for Nestle; as Nestle is much more familiar with such business line as it already acquired a similar company named Drumstick. Nestle was quite successful in its acquisition of Carnation and Drumstick due to the creation of potential synergies.

Eskimo is very innovative company, and it has introduced quite a few new products which have increased the growth of the company. It also has a patent on the product’s coating of sugar free frozen dairy novelty bar. Nestle would be able to use these patents for its other products, as well. Eskimo, with its strong ability in innovation and new products, presents a great opportunity for a huge growth in the future. Another potential reason for its acquisition is the Eskimo's ability of maintaining a strong network of licensing and sublicensing which can be utilized by Nestle to hold a very strong position in this industry as compared to the competitors.