Extraordinary Value Partners LLP was created by Weina Hedge along with a partner Minnie Kahn. EVP mostly invested in small, privately management and unknown companies that had the potential for growing into large profitable companies in the future. EVP offered two classes of the investment vehicles, the long only fund, and the short-long fund. Over a period of last five years, the long only fund had proved much more profitable than the long-short fund. Both of these funds also outperformed the Russell Microcap Index consistently throughout the investment period. Owing to this phenomenal success of the EVP, Richard Parker, the Chief Investment Officer of the SUN CAHRITIES decided to invest $10 million out of $100 million funds into EVP. However, he was confused as to which fund was more suitable and if the microcap index was a better option than the two funds. For this purpose, he needed to perform a number of statistical techniques to the historical return data of two funds and the indices. 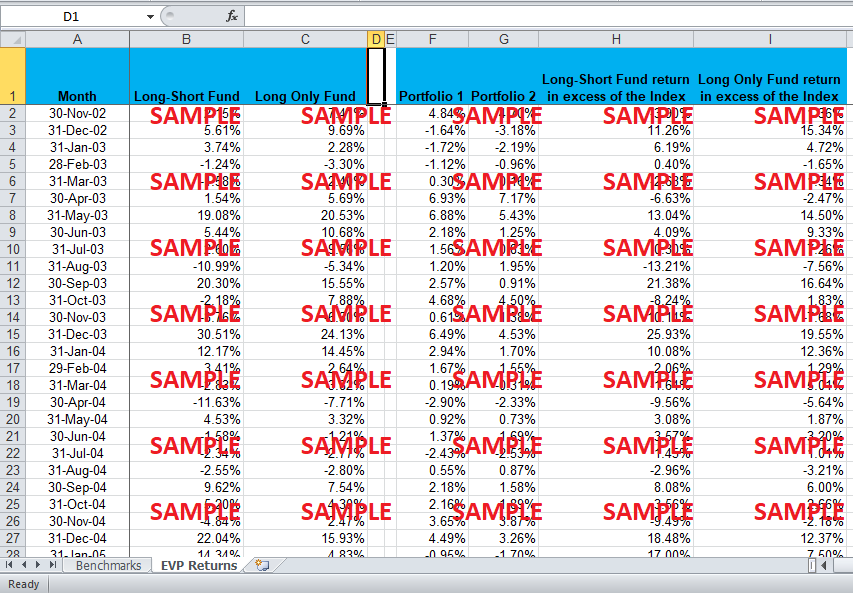 1. What were the properties of EVP's Historical Returns, and how did the Russell microcap index compare?

2. Consider the returns of the EVP funds in excess of the microcap benchmark. What were the properties of that excess return?

3. Was EVP truly a microcap stock picking fund? Use Return Based style analysis to answer this question.

There are many return based style analysis techniques to find out the style of management as far as investment criteria are concerned. One of the most effective and popular techniques of determining the style of the management is to compute the correlation of the portfolio return data with that of the indices and then find out the index to which the investment return data is most closely related. Using this approach, correlations of the monthly return data for long-short fund and long only fund can be found out. The indices that are used for the comparison are S&P 500 index, Russell Microcap Index and the MSCI EAFE indices. The results of the correlation analysis show that the long-short fund is mostly closely correlated to MSCI EAFE index and the long only fund was most highly correlated with the S&P 500 index. Neither of the two funds had very high correlations with the Russell Index; hence, it can be concluded that the EVP was not a truly microcap stock picking fund.

4. Within the microcap universe, did EVP focus on value or growth stocks?

Within the microcap universe, the extraordinary Value Partners LLP focused on value stocks more than growth stocks. The partner's ship used fundamental analysis technique to find out the companies shoe stocks were undervalued. Most of these companies were privately managed, and the shares of these companies were owned by a few investors. EVP analyzed the liquidity strength of the business, the business idea, and potential of the market to sustain the growth in the future in order to select the companies for inclusion in the portfolio.

5. Was EVP just a leveraged version of the microcap benchmark, or some other indexes available to you?

The monthly returns of the two fund of the Extra Ordinary Value Partners LLP were more highly correlated with the MSCI EAFE index than any other index. This made sense because both the EVP and the MSCI EAFE indices involved careful stock picking using various fundamental analysis techniques. The microcap index consisted of many companies that eventually failed to become large and profitable companies and hence, they failed. On the other hand, EVP selected companies that small but had strong liquidity, management style and business idea. The reason why return data of the two funds of the EVP resembled less with the Russell Microcap Index Fund was that EVP was better able to pick stocks than the market. The MSCI EAFE index consisted of stocks from Europe, Australia, and the Far East, which have high growth potential. The investment style of EVP resembled more to this index; hence, it can be said that EVP was a leveraged version of the MSCI EAFE Index.

6. What was the style of the EVP fund returns? Did this analysis give any insight into as to how EVP added value relative to microcap benchmark?