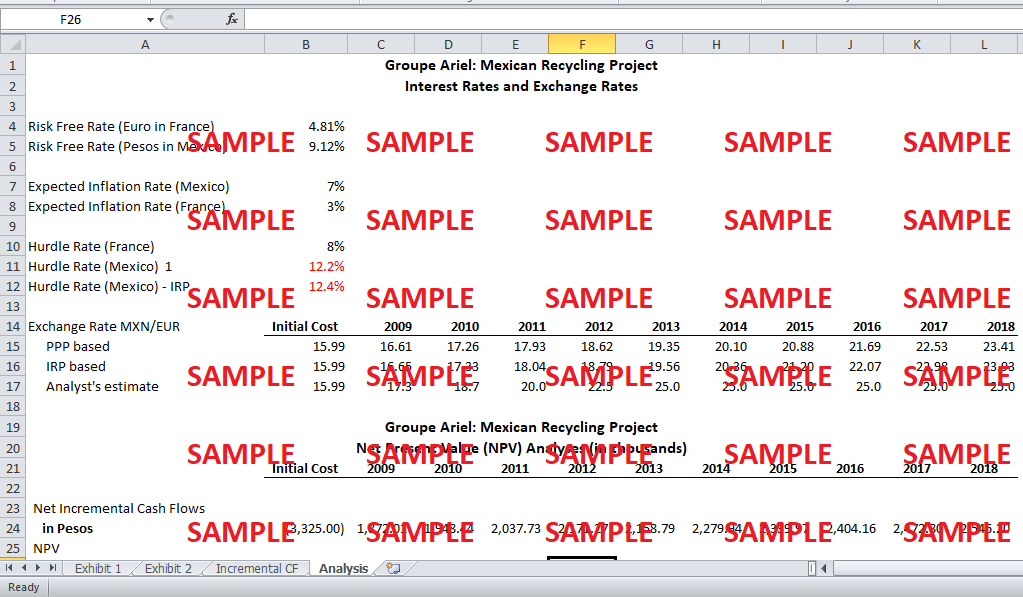 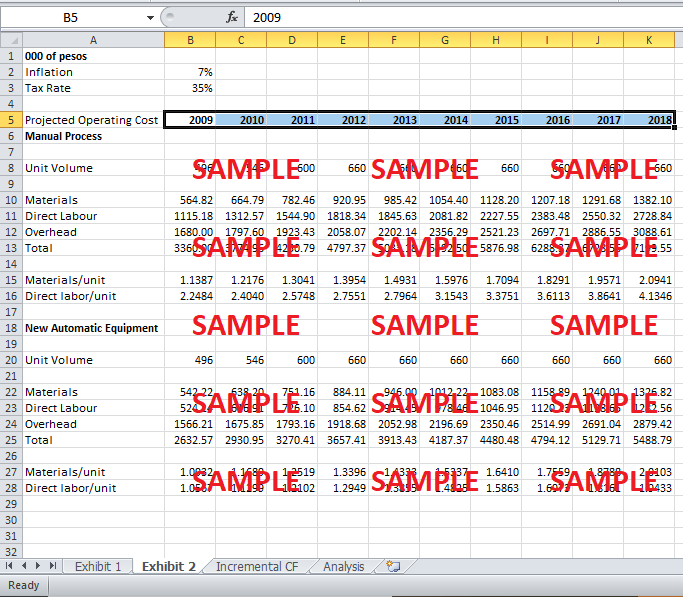 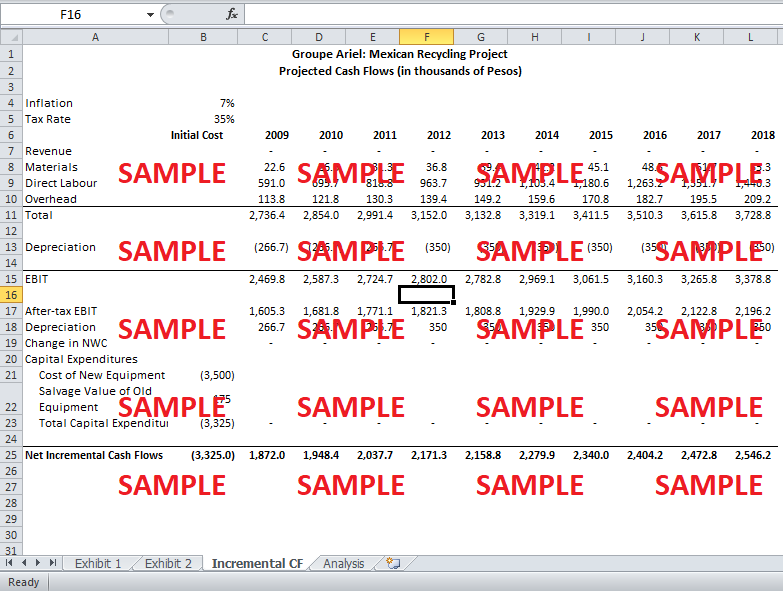 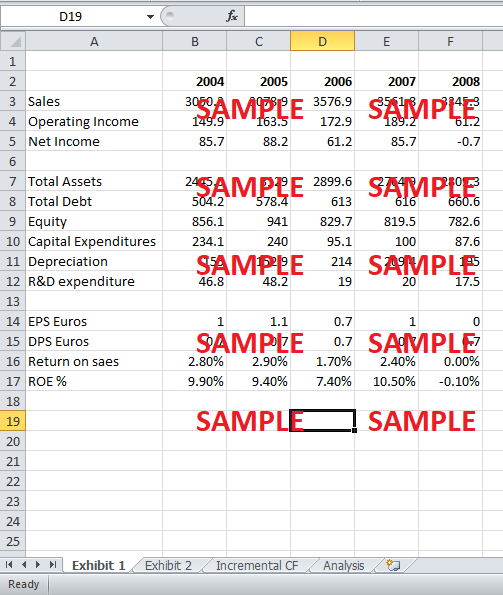 1. Estimate the cash flows of Groupe Ariel’s Mexican recycling project. These cash flows should be denominated in Pesos.

Arnaud Martin, at Groupe Ariel, has received an investment proposal from a wholly owned subsidiary in Mexico, Ariel-Mexico; the new investment proposals for the purchase and installation of new automated machinery for the recycling and remanufacturing of toner and printer cartridges. Martin has the responsibility of evaluating the proposal while keeping in mind the difference between currencies, Euro, and Pesos. Exhibit 1 below shows the estimate of the incremental cash flows for the Mexican recycling project.

The estimates for the incremental cash flows shown in Exhibit 1 have been reached at after making certain assumptions. Firstly, the change in revenue for both the projects is assumed to be zero, i.e. taking the project does not affect the demand side. However, it must be noted that the automation of recycling process will reduce human errors as mentioned in the case study. This might lead to greater satisfaction of consumers. Nevertheless, this effect has been assumed to be negligent due to lack of relevant information. This brings our focus to cost reduction.

The change in expected cost for materials, direct labor and overhead has been calculated from the projected costs given in Exhibit 2 of the case study. Moreover, the depreciation for the old equipment, i.e. 83,333.33 pesos, has been obtained by dividing its remaining book value by three. The depreciation for new equipment is 350,000 pesos that have been calculated by dividing the total cost of 3.5 million pesos with a useful life of 10 years. Resultantly, the increase in due to new project is shown in Exhibit 1.

Using a tax rate of 35%, after-tax EBIT has been obtained to calculate the free cash flows of the project. Depreciation is added back into the after-tax EBIT. The change in net working capital (NWC) is assumed to be zero as given in the case. Finally, there is no capital expenditure except for the first year. The initial investment for the project is a cost of purchase and installation of 3.5 million pesos for the new equipment less the market value of the current equipment. By adding the capital expenditures into the above, net incremental cash flows for the Mexican recycling project has been obtained.

According to Brealey, Myers and Allen (2011), the relationship between inflation rates and interest rates can be formalized as follows:

Using the above relation, the hurdle rate of Groupe Ariel in Mexico came out to be 12.2%. See Exhibit 2 for calculations.

The net incremental cash flows for Groupe Ariel have been obtained in question 1, are shown in Exhibit 1. Similarly, the estimate for the appropriate discount rate, i.e. 12.2%, is taken from Exhibit 2. The net present value (NPV) for the Mexican recycling project has been calculated by using the following formula:

Finally, the hurdle rate for Groupe Ariel based on interest rate parity (IRP) is 12.4%, as shown in Exhibit 2. It can be seen that the IRP based estimate for the peso discount rate is higher than the PPP based estimate of 12.2%.

5. What is the Peso-based NPV using this IRP-based estimate of discount rate?

The net present value of Mexican recycling project using the purchasing power parity based estimate of hurdle rate is 8,621.64 thousand pesos. As obvious, a higher discount rate from IRP approach gave a lower NPV for the project. Nevertheless, the difference does not appear to be very large.

According to the purchasing power parity, the difference in the expected inflation for any two countries should be equal to the difference between the expected spot exchange rates for the respective currencies (Brealey, Myers, & Allen, 2011). The above mentioned relation can be represented in the form of an equation as follows:

Using the purchasing power parity, the exchange rate between Mexican currency and Euro has been calculated for each year. The expected exchange rate increases from 15.99 MXN/EUR spot rates to 23.41 MXN/EUR in 2018.