Justin Anson Distillery, Inc. was a whiskey producing firm founded in 1935. Craig Anson, the COO since 1997, increased production of whiskey by 50% in 2012 to meet the forecasted demand in 2014. This led to a significant increase in the warehousing and aging costs of 2012. Consequently, despite the same sales and cost of sales as 2011, the firm reported a loss of $895,000 in 2012 instead of a $1,654,000 profit as in 2011. In order to get a loan, Anson had to analyze the inventoriable costs. The following paragraphs discusses the costs that need to be included in the inventoriable costs and their affect the financial statements. 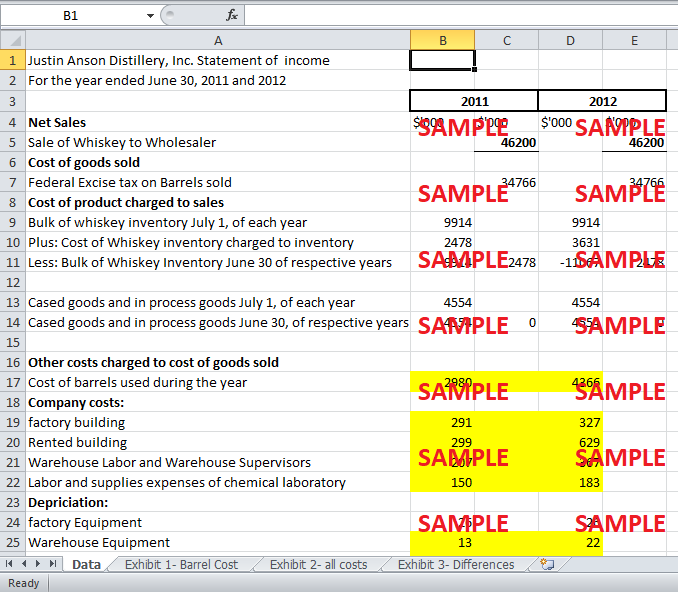 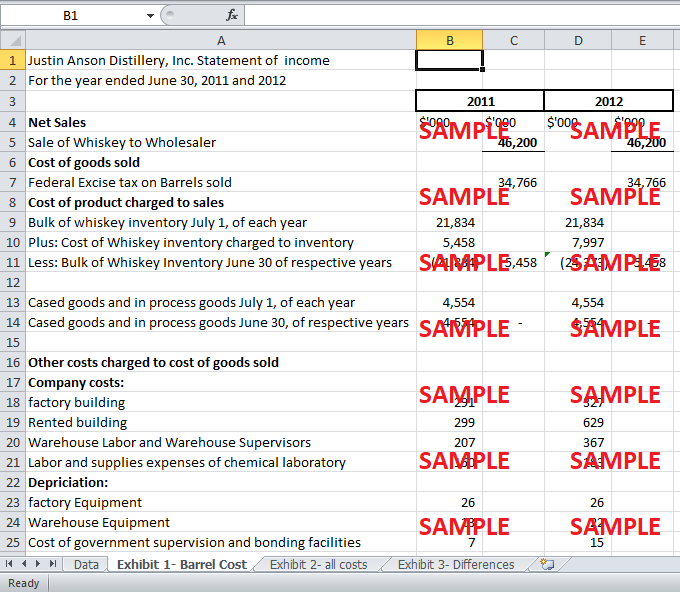 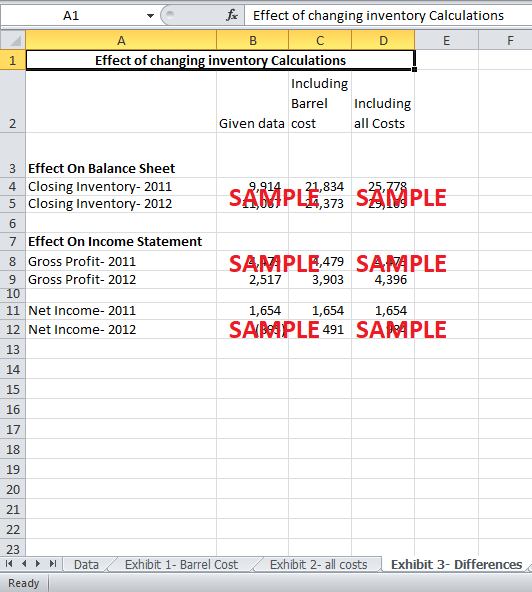 1. Assuming Anson decided to charge barrel costs (but not warehousing and aging costs) to inventory, what 2012 income statement and balance sheet items would change, and what would the new amounts be? (Assume no change in work-in-process inventory.)

Secondly, the effect on the income statement is also material for 2012. For 2011, the gross profit and net income stays unchanged as the opening and closing inventory were equal. Hence, charging barrel cost to inventory did not affect the profits. However, in 2012 the production increased by 50%, which caused the inventory to increase by 12%. Therefore, when barrel costs were attributed to inventory, the gross profits increased from $2,517,000 to $3,903,000. Moreover, the net income also increased as the reported loss of $895,000 in 2012 now showed a profit of $491,000.

2. If Anson’s suggestion of including all warehousing and aging costs in inventory were accepted, how would the 2012 financial statements be affected? (Assume no change in work-in-process inventory.)

3. In your opinion, what costs should be included in Anson’s inventory when preparing financial statements to be submitted to Valley National Bank?

The firm decided to increase production by 50% in 2012 when Craig Anson forecasted an increase in demand in 2014. Furthermore, the company is hoping to expand its reach. Thus, the increase in production was inevitable. The sales and cost of goods sold for 2011 and 2012 were almost the same. However, the income statement showed a profit of $1,654,000 in 2011 and a loss of $895,000 in 2012. This clearly showed a flaw in the costing of inventory.

Hence, to reduce the difference in profits, the barrel costs were charged to the inventory. This improved the 2012 financial position and performance as reflected in the financial statements. The inventory in Balance Sheet increased. This would improve the current ratio of the firm and show a material increase in current and net assets. Similarly, the gross profit and net income also improved as the cost of barrels was not expensed out. The inclusion of warehousing and aging costs in the inventoriable cost further improved the financial statements position. The inventories in the balance sheet improved even more. The profits for 2011 remain unaffected, but 2012 income statement showed a reasonable profit compared to previous years. This shows an improved sales margin, efficiency and profitability of the firm.

In order to determine which costs should be included in the inventoriable, it is important to determine the meaning of inventoriable costs. These are defined as the costs that are incurred to produce the inventory item and to bring them to the condition required for eventual sale. These costs are not expensed but are assigned to the inventory asset. Hence, the costs are not charged to expenses in the period in which they are originally incurred.

The barrel cost and warehousing and aging costs should both be included in the inventoriable cost. These costs are incurred to bring the product to the location and condition which are required for its eventual sale. Hence, according to International Accounting Standards about Inventory costs, these costs should be included in inventory.

Craig Anson also has to take a loan from Valley National Bank for expansion purposes. The bank will only grant him a loan if he shows reasonable profits in his financial statement.