Kanthal needed an account management system, which could identify the hidden costs and hidden profits of the customers, to concentrate its marketing and sales efforts on profitable areas, and to support its strategy of growth and profitability. Traditional system was unable to the find the ordering costs, and it could not allocate the actual cost and individual profitability of a customer order. New Kanthal 90 Account Management system has the features to solve this problem. This system could identify the costs related to production, sales and administrative resources and to stocked and non-stocked items. This system could identify the profitable and non-profitable customers. This system has some limitations, but it has gotten potential to bring a change in strategy and to support Kanthal be highly profitable in the industry 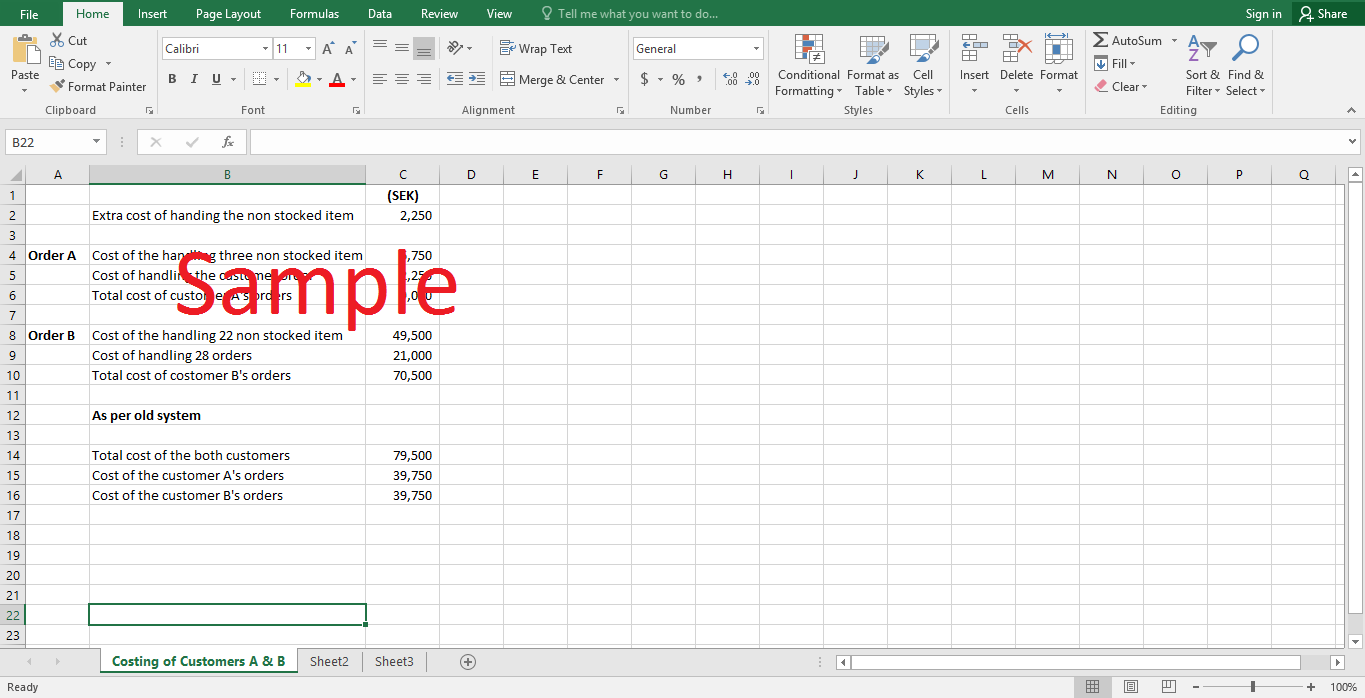 1. What was the Kanthal president, Ridderstrale, attempting to accomplish with the Account Management System? Are these sensible goals?

According to Ridderstrale, the resources were distributed equally across all products and customers, and they could not measure individual customer’s profitability or the costs of the individual orders. He wanted that the company could handle increased sales volume without a corresponding increase in the support resources. As there were low customers with hidden costs as they placed high demands on the services and customized products while on the other hand, there were customers who bought standardized products without any demands. Hence, Ridderstrale wanted to design such an Account Management System which would help identify the individual profitability, and it would help in the allocation of resources to the most profitable areas.

The previous cost system showed the two customers to be equally profitable on the gross margin basis as overhead costs were on the basis of the percentage of the sales. However, there were those customers who required the low margin customized products with more demand on the service and hence were very costly for the company, but the previous system could not allocate the costs and profitability accordingly. Hence, there were such customers with hidden costs. There were customers who did not place any demand and bought standardized products, but on the basis of volume, the costs were allocated in the same way as other low margin products. These were the customers with hidden profits.

Secondly, the customers who had adopted the JIT system but placed high pressure on the Kanthal by pushing back inventory and by placing small orders, and hence these were the most non-profitable customers and could be said the customers with hidden loss. In this case, Kanthal could not measure the new demands, costs placed on the production, order handling customers by these customers and these costs were perceived to be fixed and were allocated on the basis of the volume instead of individual costs and profitability.

3. How does the new Kanthal 90 Account Management System work? What new features does it offer? What are its limitations that may limit its effectiveness?

New Kanthal 90 Accounting Management statement would enable Kanthal to determine profit per customer order and cost per order including costs related to production, sales and administrative resources of Kanthal. Through interviews, project team identified how much expenses of the departments were related to the volume and how much of these to the individual production and sales order. Tradition costing distributed the selling and administrative expenses as a percentage of the volume and it also applied the extra costs of the handling the non-stocked items to all items instead of only non-stocked items. New system calculated the manufacturing volume costs, stocked and non-stocked costs, manufacturing order costs, sales order and sales volume costs; hence, it helped to trace the actual costs of the products. Newer system identified the individual profitability, and it also shows the profitability by the customer, by product group or by all orders received from customers.

As this new system changed the whole costing process and showed actual costs of the products, there were high ordering costs of the few products and many customers now were either breakeven or even loss customer. Hence, people did not believe that ordering costs to be very high. Charging the non-profitable customers with high indirect costs can impact the business and sales of the company. Regarding the acceptance of the new system, overseas divisions were skeptical about this exercise, and it was perceived to be an intrusion of headquarters into their operations.

4. Consider a product line whose products generate a 50% gross margin (after subtracting volume-related manufacturing and administrative expenses from prices). The cost for handling an individual customer order is SEK 750, and the extra cost to handle a production order for a non-stocked item is SEK 2,250.

a. Compare the net operating profits of two orders, both for SEK 2,000. One order is for a stocked item, and the other is for a non-stocked item.

In case of the first order, after subtracting the cost of the individual order from the net operating profit, the profit comes out to be SEK 250. As this order is a stocked item, so cost of SEK 2,250 does not apply here. While in case of the other order, the cost of handling is SEK 2,250 which makes this order to be a loss of SEK 2,000.

Using the traditional costing method, the both orders would be unprofitable as costs would be equally allocated to the both orders. The first order, which did not include the extra cost of SEK 2,250, would be now showing a loss of SEK 875 after the allocation of this amount to the both products equally.

As the customer B’s sales also contain the 22 non-stocked items, which would cost SEK 49,500 as the extra cost to handle one non stocked order is 2250. So, after this allocation under the new accounting system, it can be said that the profit margin of A is higher than B as the total cost for the customer A’s orders is SEK 9000 while in case of B,  it is SEK 70500.  In the same way, operating profits are SEK 71,000 in case of A, and 9,500 in case of B.

Using the traditional costing method cost of the both would equal as the total cost of handling individual orders and extra costs of the non-stock items would have been distributed equally. Cost of the customer A's orders would now be SEK 39,750 instead of SEK 9,000 while in case of B, costs would also be SEK 39,750 much lower than actual costs of SEK 70500. Now, in case of A, operating profits would be reduced to SEK 40,250 from 71,000. In case of B, operating profits would be increased to SKE 40,250 from actual SEK 9,500.

5. What should Ridderstrale do about the two large unprofitable customers revealed by the account management system?