This case deals with the liability management at General Motors, especially in the context of their plan to raise $400 million by issuing non-callable five years bonds with semiannual payments. Stephane Bello, the analyst at the capital market group in General Motors has to decide whether he should issue the debt without accompanying it with any derivative instrument or not. The objective of all the exercise is to insulate the cash flows from negative effects of interest rate fluctuations. Best option can be selected by calculating yield rates at different interest rates of all the available options and finding out the volatility of returns with changing interest rates. 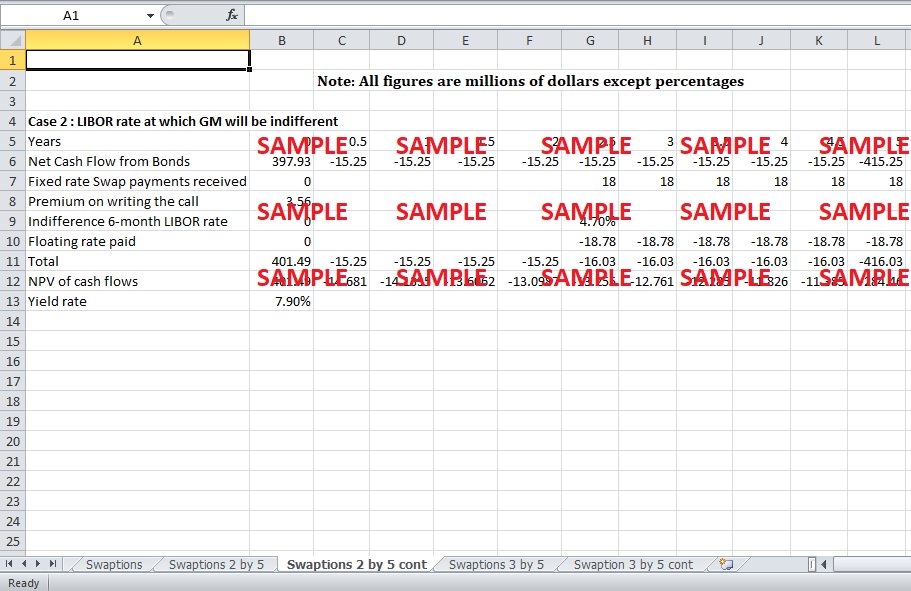 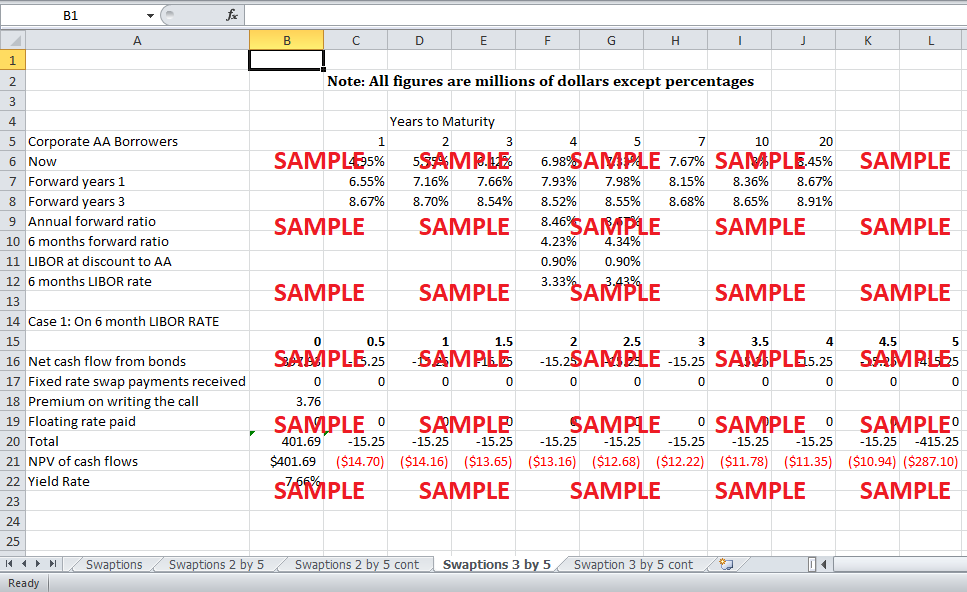 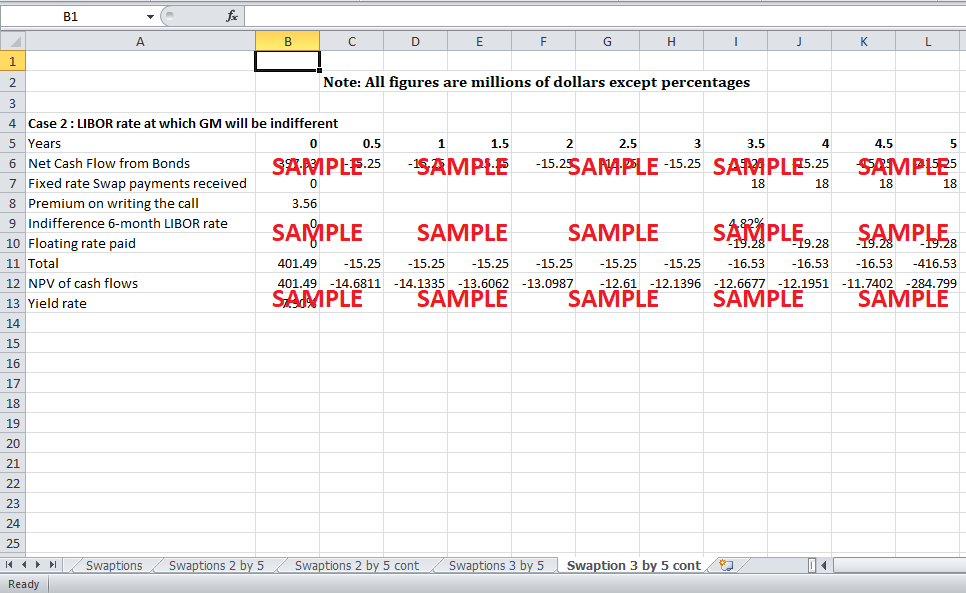 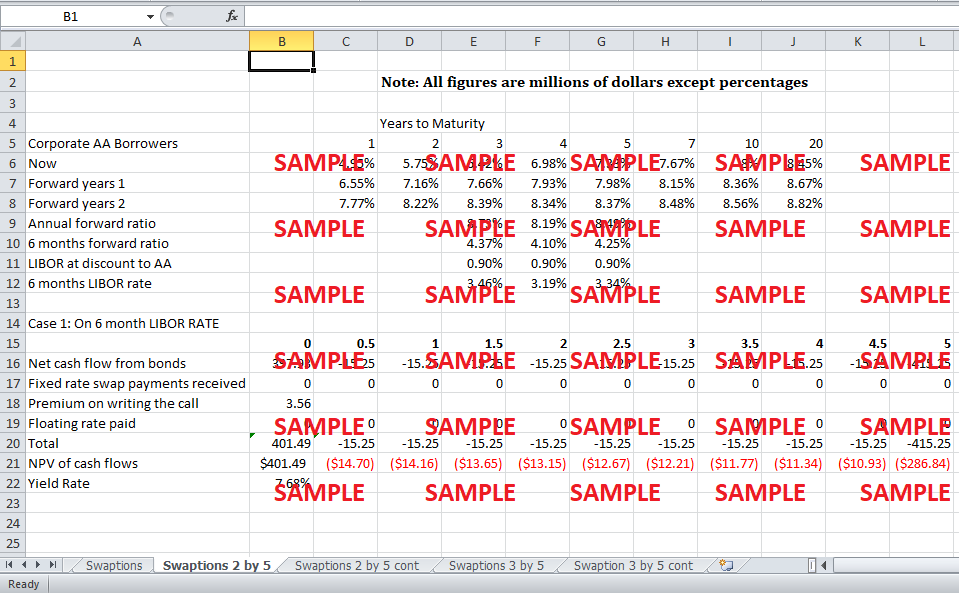 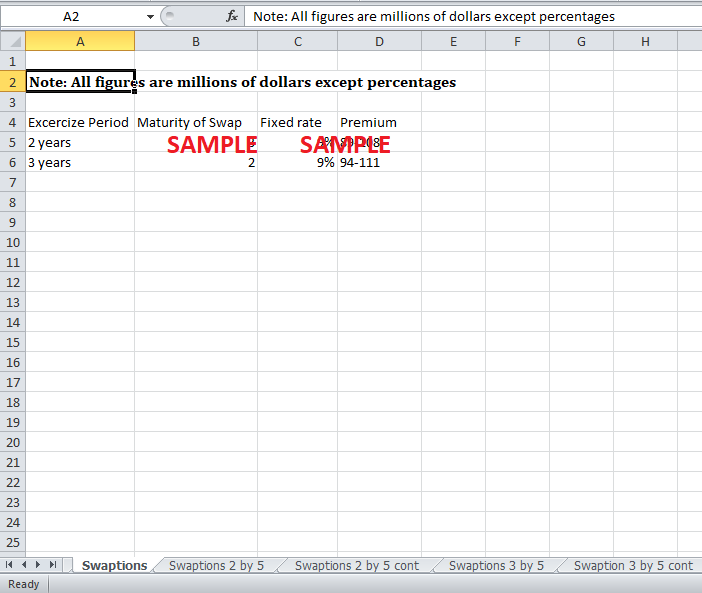 Calculations have shown that the formula is statistically significant at 95% confidence interval.

In addition to sales, costs of production also get affected by the interest rate because most of the funds required for investment in working capital and operations come from the borrowed money. As costs of financing increases, the productions costs increase and profit margins decrease. Increase in interest rate also affects the stock price of the company directly because when investors realize that they get a better compensation for risk in debt instruments as compared to the equity, they may prefer bonds over stocks.

Following are the options that Stephane Bello has to analyze.

Swap is one way to change the exposure of the bonds from changing interest rate. Instead of a fixed pattern of payments, GM can opt to pay a variable interest rate that is linked to LIBOR rate. Annual LIBOR rate for this purpose is 7.12% while the spread of floating rate over treasuries is 0.42% to 0.46%. It is not necessary that the firm enters into a swap agreement that has the same maturity as the bonds. Therefore, for the purpose of this case, swap will be analyzed for 5-years, 3-years and 2-years. In the Swap agreement, instead of paying fixed interest rates, the firm will receive fixed coupon payments at a fixed rate while it will give interest payments at a floating rate. In this way, the firm will be able to reap the benefits for a decrease in interest rate.

Calculations show that 5-year swap is beneficial for the company; 6-month LIBOR rates have to remain predominantly lower than 3.56%. For the 3-year swap, LIBOR rates for 6-months have to decline by about 5% or more on a period-by-period basis from3.60%. However, for the 2-year swap, calculations show that the cost of capital will not be lowered by the swap under all circumstances, and this option is not feasible regardless of the movement of the direction of interest rate movements.

Current 6-month LIBOR rate is 4.31% while the probability of LIBOR rates decreasing below 4% is almost zero. Therefore, Swap contracts are not suitable for protecting GM’s cash flows from negative effects of interest rate fluctuations, and cost of capital will also not decrease.

However, long term yield curve is expected to flatten as most of the banks have forecasted. The short term rates will keep increasing while the current rate is 6.66%; hence, GM needs at least a yield of 6.66%. The calculations have shown that the price at maturity would remain below the bull spread and hence, buying and selling options on treasury notes is not a good option. However, the probability that the caps will not be exercised is 50% for cap with an exercise price of 9% while the probability is 65% for 10% exercise price cap. This means that GM can achieve its goals and objectives by selling a cap with the exercise price of 10%. Although the chances of meeting the goals are high, downside risk of unlimited losses at an interest rate above 10% pose a serious threat to the company. This downside risk may not make the benchmark cap option worthwhile.

A swaption is in essence an option to enter into an interest rate swap with the terms and conditions specified. Calculations in the excel sheet show that for 2-by-5, swaption, premium is $3.56 million while the cost of capital is 7.68%. The threshold 6-month rate of LIBOR for 2-by-5 swaption is 4.7%. On the other hand, 3-by-5 swaption has a premium of $3.76 million while the cost of capital is 7.66%. The threshold 6-months LIBOR rate for 3-by-5 swaption is 4.82%. The probability of making a profit is 60% to 55% while the probability of making a loss is 40%-45%. So, although this is a good instrument for GM to insulate cash flows from interest rate changes, immense downside risk associated with unlimited losses for interest rates above 9.4%/9.64% may make this option not worthwhile.

Looking at conclusions of all the above options in the context of estimates of increase in interest rates in the future, the best option available for GM seems to be ‘doing nothing’. GM should issue the $400 million note without attaching any derivative to it because doing this serves the objective of risk management better than the other options.