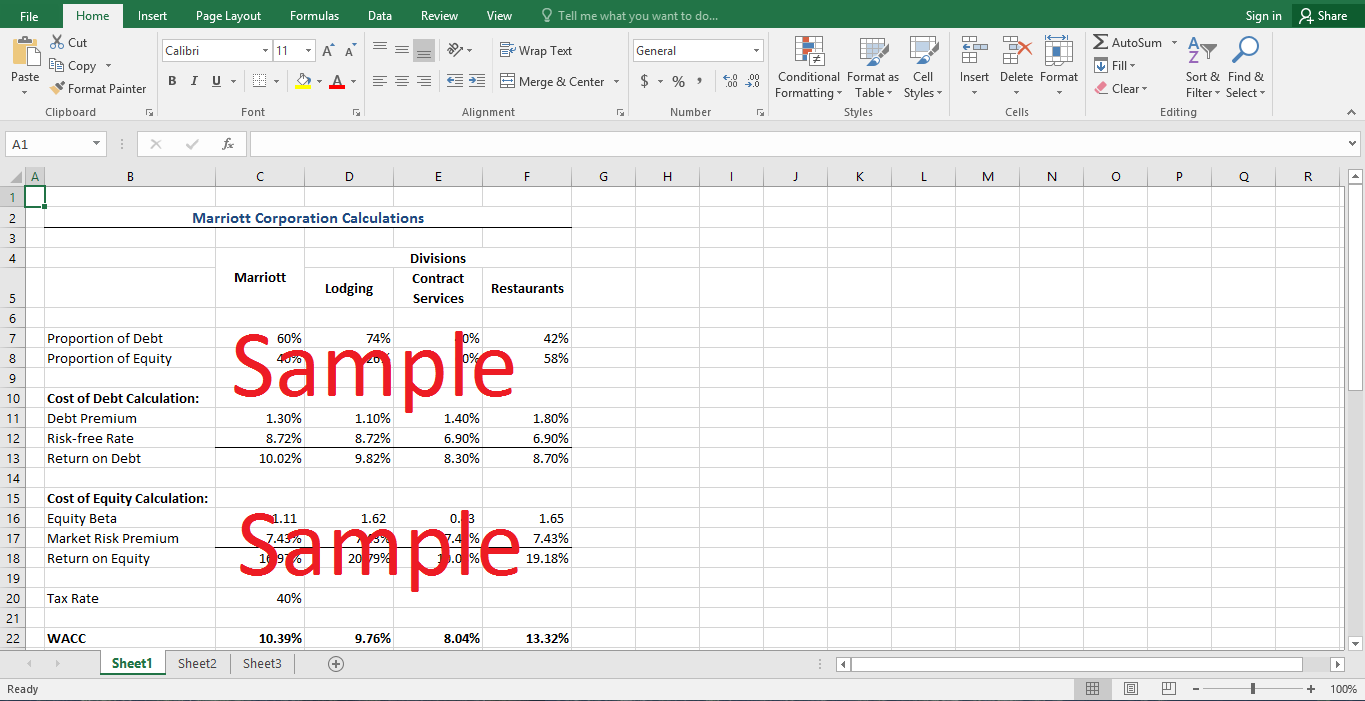 1. Are the four components of Marriott's financial strategy consistent with its growth objective?

The first component of the strategy is to manage rather than own the hotel properties. This objective mitigates the investment needed to launch new hotels, as the general partner is not required to make significant investments. Although it may be argued that such a strategy could decrease the profit margins, the growth prospects are certainly easily achievable because of less limitation on the resources required. The second objective is an important characteristic of modern corporate finance. It believed that focusing on maximizing shareholder value should be the underlying aim of every corporation, leading to stable growth and healthy profits. With regard to the third objective, Miller and Modigliani claimed that the use of debt, in the presence of corporate taxes, could increase the value of a company through the value added by debt tax shield. In modern finance, it is commonly believed that debt can increase the value of a corporation. However, a company should be careful about high debt levels because of the distress costs associated with high debt. As stated by Marriott, a corporation should aim to optimize its debt at the most beneficial level. The repurchase of undervalued shares might not always be consistent with the growth objective. The repurchase program could make sense if the shares are believed to be highly undervalued and the company does not have more attractive investment opportunities to utilize its cash. However, the strategy could also hinder growth if the company is foregoing highly profitable investment opportunities in order to take advantage of slight under pricing in its shares.

2. How does Marriott use its estimate of its cost of capital? Does this make sense?

3. What is the weighted average cost of capital for Marriott Corporation as a whole? What risk-free rate and risk premium do you use to calculate the cost of equity? How do you measure Marriott's cost of debt?

There is no agreed-upon measure of riskfree rate that investors could use. In fact, the available riskfree interest rate could be argued to change with changes in business cycles and economic policies. In the US, the rate offered by US Treasury securities is often deemed riskfree because of the negligible default risk. However, there is a disagreement regarding the maturity of the treasury security that should be used as a proxy for riskfree rate. Since Marriott is seeking to optimize its debt at a long-term stable level, it is believed that the maturity of the company’s debt will be long. Therefore, the 10-year Treasury bond seems to be an appropriate measure of riskfree rate. The cost of debt is calculated by adding the specified risk premium to the selected riskfree rate.

The cost of equity can be calculated using the Capital Asset Pricing Model (CAPM). The market risk premium is an important constituent of the CAPM. The market risk premium estimates the premium for the excess risk taken by market participants. Investors can earn a certain degree of return – the riskfree rate – without taking any risk. Therefore, the riskfree rate should be subtracted from the market return to calculate the market risk premium – the extra return that investors earn by taking risk. We already have an estimate of the riskfree rate that can be used for Marriott. Therefore, the market risk premium can be calculated by estimating the appropriate market return. The proxy for market return is usually a national stock index such as the S&P500 for US companies. In contrast to the Treasury bond market, where the yields provide an estimate of the future returns on the security, there is no consensus estimate on the future expected return on the stock market. Therefore, historical averages of stock returns are typically used to estimate the future expected return on the market. We use biggest available period – 1926 to 1987 – to estimate the average historical market risk premium. The information about riskfree rate and the market risk premium can be combined with equity beta of Marriott (provided in the case study) to calculate to cost of equity of the company. Once we have the respective costs of debt and equity, the weighted average cost of capital (WACC) is simply their average – weighted using the target proportion of debt provided in the case study. The calculations in the attached spreadsheet show that the WACC for Marriott is 10.39%.

4. What type of investments would you value using Marriott's cost of capital?

5. If Marriott used a single hurdle rate for evaluating projects in each of its divisions, what would happen to the company over time?

6. What are the costs of capital for the lodging and restaurant divisions of Marriott?

The division wise calculations of the cost of capital are shown in the attached spreadsheet. The weighted average costs of capital for the lodging and restaurant divisions are 9.76% and 13.32% respectively. It is important to note that the discount rates differ because certain inputs in the calculations are dissimilar. The most significant differences are in riskfree rates, asset betas, and debt proportions.

a. What risk-free rate and market risk premium do you use in calculating the cost of equity capital for each division? How do you choose these numbers?

There is no full consensus of which proxy for riskfree rate should be used. Nevertheless, it is generally believed that the maturity of the riskfree rate proxy should match the purpose for which the rate is utilized. It is mentioned that the lodging division has more long-term assets, while assets of restaurant division are short-term in nature. Therefore, one-year riskfree rate has been employed in the restaurant division, whereas a higher ten-year rate has been utilized in the lodging division. On the other hand, the market risk premium for both divisions is the same as the market risk premium previously used for the whole company. Although the asset betas for the divisions have been calculated using the past five years data, it is believed that a larger pool of data should be used to estimate the market risk premium because the recent volatility in the markets might distort results.

b. Did you use arithmetic or geometric averages to measure rates of returns?