Massey- Ferguson Limited, a multinational manufacturer of diesel engines, farm and industrial machinery. By 1980, Massey was the largest supplier of diesel engines and west’s largest producer of farm tractor. Between 1960 and 1970, Massey had a plan to expand operations and acquire assets through short term debt financing. By 1978, Massey stood at 214% of debt to equity ratio. In the same year, Massey reported an unprecedented year end loss of U.S. $262.2 million. Furthermore, high interest rate along with reduced sales in coming years aggravated the situation and by the end of 1980 the debt to equity ratio raised to 464%. All these circumstances lead Massey-Ferguson into financial crises. 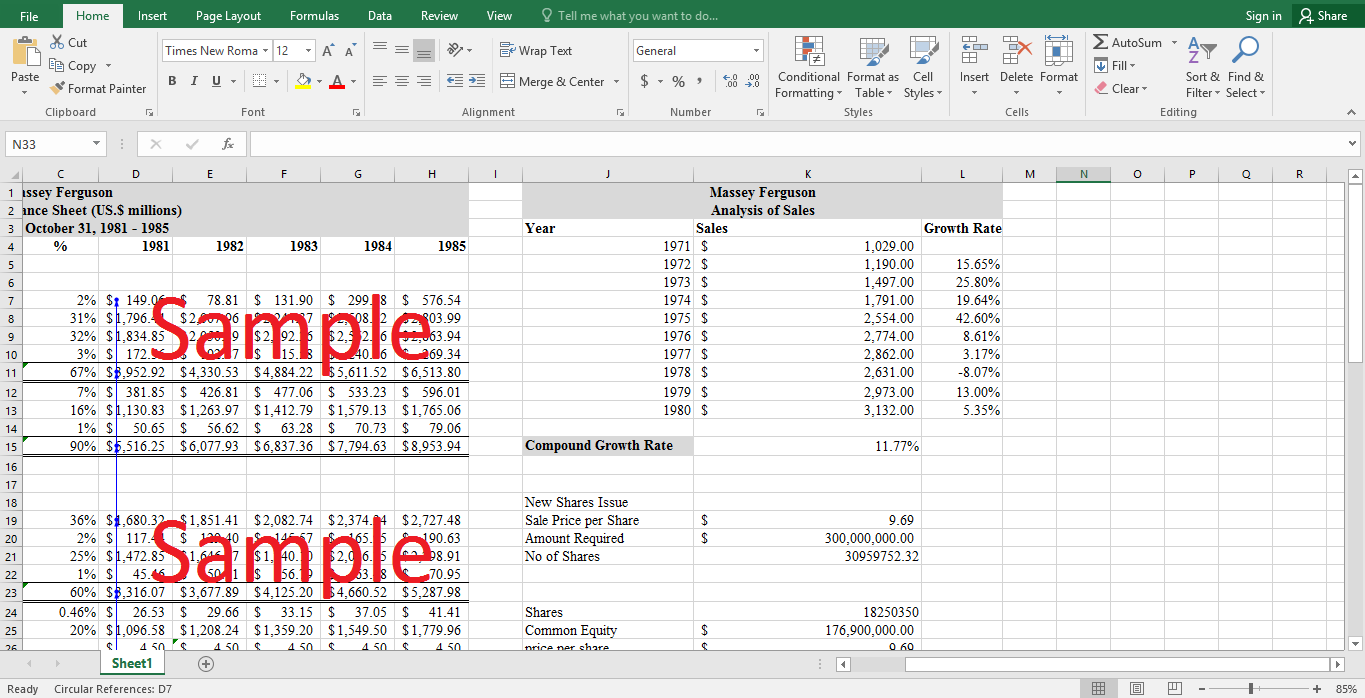 1. Assess the product- market and financial strategy Massey pursued throughout 1976. How does Massey differ from its competitors?

For the assessment of the product-market and financial strategy of the company, it is important to state the three kinds of company’s products i.e. farm machinery, industrial machinery and diesel engines. Moreover, Massey Ferguson has identified the target markets for each of its products. For instance, North America and United Kingdom has the largest capacity of 81.3% for the farm and machinery products while United Kingdom has the market for diesel engines with the capacity of 76.7%. The company is competing with its competitors by offering developed technologies through greater focus on Research and Development activities. Furthermore, although the marketing and financial strategy is guided and affected by changes in the internal market fluctuations; however, Massey Ferguson overcomes its internal exposures through benefits from the external markets of North America and Europe. Based on the comparison between the two competitors, the findings exhibits show that Massey Ferguson has a higher market share of 33.9% when compared with Intl Harvester and lower market share than 38.4% of Deere. Moreover, the company has the highest debt to capital ratio as compared to Intl Harvester, as well as, to Deere.

2. As a financial advisor to Massey's management, what refinancing plan would you propose? Be specific - Hint: Use Proforma financial statements to make sure your proposed plan is viable.

Massey’s management has two options for refinancing i.e. refinancing through debt and refinancing through equity. In 1978, the company debt to equity ratio is 214%, and in the same year the net loss to the company is 256.7 million. One of the reasons attributed by the management to this massive loss is high interest payments. In 1980, the D/E ratio has increased to 464%, which resulted into a massive loss of 22.2 million. Surely, in order to decrease its D/E ratio company needs to raise its equity by issuing preferred shares and common shares. Under the proposed plan, company will issue 400 million worth of preferred shares at $25 per share and 300 million worth of common stocks at $9.69 per share. Company will use 300 million financed through common stock in paying back the principal amount of bank borrowings results in reduced interest payments. The rest 400 million worth of financing will be used for

Increasing 225 million of fixed assets, 100 million increase in marketing and general administration expenses and 75 million in product development expenses; this refinancing will have a positive effect on company’s financial statements. The compound annual growth rate of sales is 11.77%. In 1980, the sale in North America, as compared to the previous year, reduced to half. The sales in North America are 33% of total sales. Refinancing will definitely help the company in getting back its lost market share and thus 33% of the next year projected sales will be doubled. Repair, replacement and reallocation of facilities will help the company in reducing the cost of goods sold by 19 to 20 percent. Moreover, the effect of foreign currency exchange rate will be reduced. The pro-forma financial statements under this proposed plan show 506.20 million of net income in the coming year from which 495.6 million will be paid to preferred shareholders as a dividend at $0.25 per share. Under the proposed plan, the company will pay preferred share dividends and will remain profitable in next five years.

Company will issue around 30.1 million common shares to previous shareholders, and it will also sell in the market. Moreover, this will increase the number of common stock holders. The retained earnings will keep on increasing from 91 million to 865 million. Company will pay dividends after next five years.

Banks are the major lenders of the company. In 1980, company had total debt of 1.6 billion outstanding with more than 100 banks around the world. Refinancing was required otherwise company would be technically in default on some loans. Cross default provision made substantially all outstanding loans callable if any single default occurs. Hence, in order to prevent the company from default, 300 million will be given to the lenders. In the future, the profitable financial results will increase trust of lenders on the company.