It can be seen that the beef industry underwent a shift as the consumers shifted from meaty snacks towards healthy alternatives as the population demographics changed, and the rise in immigration brought about changes in the Canadian food consumption culture. Hence, the demand for jerky beef increased significantly as people were able to convenient consume a healthy snack with rich protein. Hence, MHMT saw the beef demand outstripping its supply, which meant a loss of potential revenue. Greg Pahl was therefore faced with a decision to either maintain the current operations by streamlining a few of the processes for added profitability, expand the shop to increase the production capacity in the face of the rising demand, or lease a new facility which would be a cheaper option and provide the business with a greater degree of flexibility in terms of managing the fluctuating demand of the meat snacks. 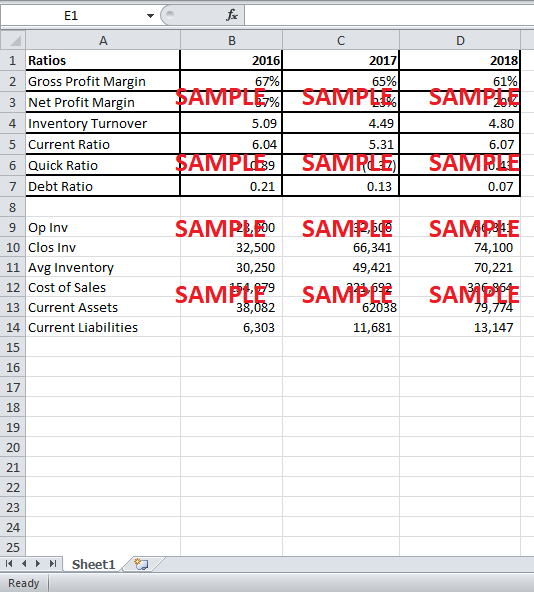 Based on the SWOT Analysis (Exhibit 1) and PESTLE Analysis (exhibit 3), it can be seen that Medicine Hat Meat Traders hold to benefit a lot given the rising demand of the jerky beef amidst the trend of going local as people would prefer buying local meat snacks over the imported ones. As MHMT has a good reputation in the market, it will benefit from a higher sales revenue as people prefer buying food that is prepared safely and to support their local economy. Although there is a high level of consolidation in the industry Greg Pahl is engaged in producing diversified flavors of jerky beef, which will give the business a competitive edge in the market as its offerings will be differentiated (Dickson & Ginter, 1987). E-commerce is also a broad avenue and would help the business in increasing its overall sales volume.

The financial analysis (Exhibit 2) shows a grim picture of MHMT’s position as the Gross Profit Margin and Net Profit Margin can be seen to be consistently falling. Although the business recorded an overall increase in sales revenue, its margins declined to owe to the rising cost of sales. However, the inventory turnover shows a positive outlook as it has declined over the three years, indicating that the business has been able to quickly convert its inventory of jerky beef into a sale. Studying the liquidity ratios, the current ratio of the business indicates that it has idle current assets lying around, which could be invested to generate a higher return for the business. However, the quick ratio indicates that the business has a high level of inventory lying around, which could still mean that it might be unable to pay back its suppliers as it would run out of cash.

Lastly, the business operates in a risky industry as its sales might get adversely affected by factors that may not be in its control and the probability of those risks occurring is moderate (Exhibit 4). As far as internal risks are concerned, they are a few and can be overcome by the expansion and cash management strategies undertaken by the business.

Firstly, it can be seen that the margins for Medicine Hat Meat Traders are consistently declining. This is majorly attributed to the rise in the cost of beef, which is the main ingredient used in jerky beef. As the prices of beef are volatile, being as high as $193, which substantially affects the business margins as it cannot pass on the costs to the consumers. To overcome this risk, MHMT can enter into commodity futures for securing the price of the cattle (Conlon, Cotter, & Gençay, 2016). This way, it would be easier to ascertain the business profitability and have stronger control over it by dictating the margins and cutting the costs.

Secondly, Greg Pahl can consider expanding the business operations by setting up his own cattle farm from where he would get the beef produce. This would give him a higher control over the quality of the beef produced and would allow the business to penetrate into highly health-conscious customer segments. As the beef takes up a large chunk of the total cost of the beef jerky, having its own supply of cattle would allow MHMT to hedge itself from volatile cattle prices and save costs.