Robertson is a family owned business that is a market leader in some of its products, but the company is not run efficiently by the Robertson family. Possibly, due to its potential for greater profits through efficient operations, the company has attracted a lot of interest from other companies. One of the companies that are interested in Robertson is Monmouth. Monmouth manufactures a variety of equipment. Its most significant product segment – engines and massive compressors – is cyclical in nature, which had led to variable earnings. The company is looking to improve its earnings by acquiring Robertson. The company’s estimates of Robertson’ cash flows after acquisition imply a huge increase in its value in the form of synergies. The timing of the acquisition offer is also right because the Robertson family, who were previously against acquisition offers, have recently started considering acquisition bids. Monmouth has to quickly make an acquisition offer to Robertson before other interested companies finalize a merger with the Robertson. 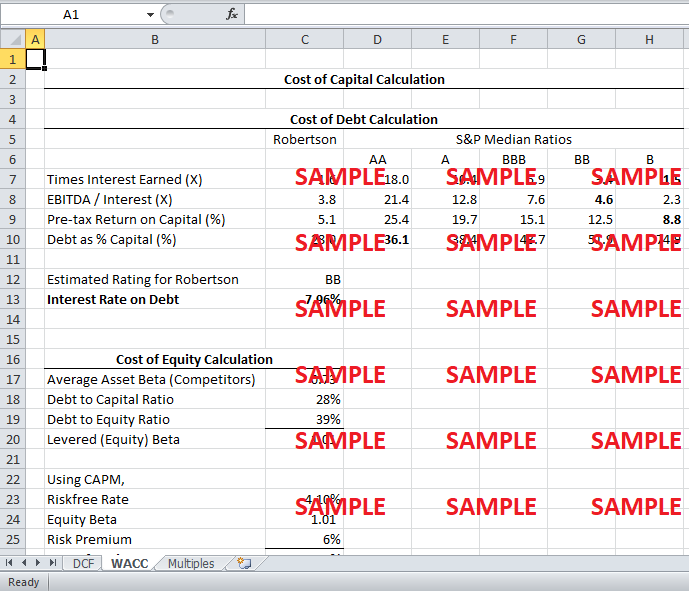 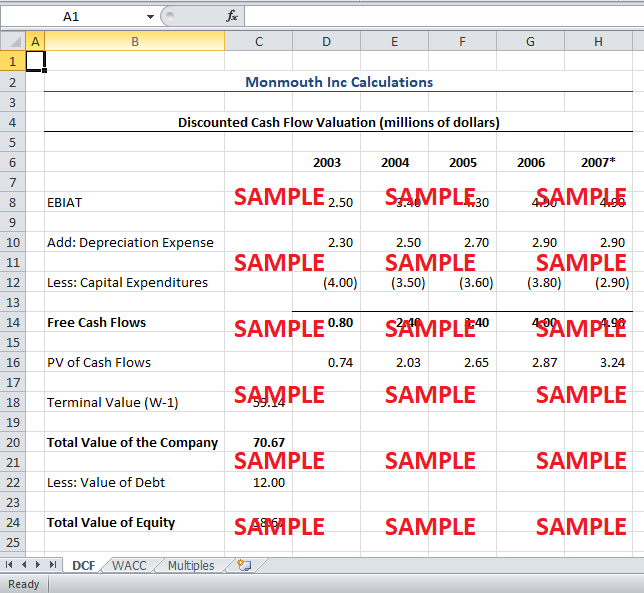 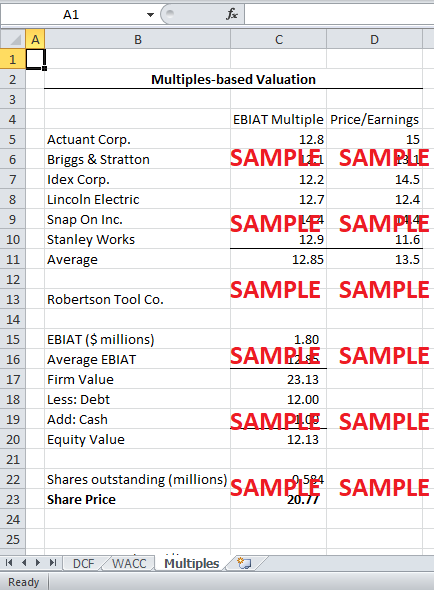 1. What is the maximum price that Monmouth can afford to pay: i) based on a discounted cash flow valuation, including calculation of WACC and terminal value determination, ii) based on market multiples of EBIAT?

Monmouth believes that the management of Robertson is not managing the company in an effective manner. Although Robertson is in a strong competitive position, it is growing at a rate much less than the industry’s average growth rate. Robertson also has lower profit margins when compared to its competitors. However, the company exhibits strong future prospects due to its leading market share, quality product, high industry growth, and extensive sales network. Monmouth expects to improve the performance of Robertson by improving the efficiency of operations, and enabling the company to grow at its industry average.

The income projections for Robertson, as estimated by Monmouth, are presented in the exhibits of the case. These projections can be used to determine the yearly free cash flow that Robertson is expected to generate, if it is a part of Monmouth. The free cash flow can be estimated by adjusting the earnings before interest and after tax (EBIAT) for depreciation and capital expenditures. Depreciation is added back to EBIAT because it is a noncash expense, while capital expenditures are deducted because they represent a usage of cash. The remaining cash is the free cash that is available to debt and equity owners of the company. The sum of the present value of this cash flow represents the total intrinsic value of the company.

Furthermore, the cash flows for Robertson have only been forecasted up to the year 2007. Therefore, we need an estimate of the terminal value of the cash flows that are expected to be generated after the year 2007. The cash flows after the year 2007 can be estimated by employing the Gordon-growth model. The company is currently growing at a growth rate of around 2%. However, Monmouth expects the company to grow close to its industry growth rate of 5-6% after the acquisition. Even if Monmouth is able achieve such a growth rate for Robertson, it will not be able to sustain this growth rate perpetually. Once the industry proceeds towards maturity, it is more likely that the long-term growth rate of Robertson will be closer to the GDP growth of the economy. Therefore, a more conservative estimate of 3% growth rate is used for terminal value calculation. The total value of the company obtained through these calculations is adjusted for long-term debt and divided by the total outstanding equity shares to calculate the share price. The intrinsic value of the share price is estimate to be approximately $100, which is substantially higher than the current market price of about $30. However, the value determined by the discounted cash flow approach is highly dependent of the accuracy of forecasts and assumptions used. For instance, if we decrease the long-term growth rate (used in the calculation of terminal value) from 3% to 2%, the share price decreases from $100 to $84.

We can also try to estimate the value of Robertson using the multiples data for comparable companies. Two different types of multiples are available for similar firms: enterprise value to EBIAT multiple and price to earnings ratio. The EBIAT multiple will give us an estimate of the enterprise value of Robertson, relative to its comparable companies. The most recent EBIAT of Robertson is multiplied by the average EBIAT multiple of similar firms to get an estimate of the enterprise value of the company. To obtain an estimate of the value of equity, the long-term debt of the company is subtracted from the enterprise value, while the cash balance is added back. The resulting equity value is divided by the number of shares outstanding to obtain the share price based on EBIAT multiple. On the other hand, the price to earnings ratio can give an estimate of the share price of Robertson using a much simpler methodology. The average price to earnings ratio for comparable companies is multiplied by the most recent earnings per share of Robertson to obtain an estimate of the share price. It should be noted that the multiples approach determines the value of the company relative to its comparable companies. Therefore, if the comparables firms are underpriced, the value assigned to Robertson will also be understated. Moreover, the discounted cash flow approach takes into account the synergies (cost cutting and additional growth) that are expected to result after the merger, while the multiples approach does not account for the synergies. These reasons might explain the large discrepancy between the share prices calculated using the discounted cash flow approach and the multiples approach.

2. Why is Simmons eager to sell its position to Monmouth for $50 per share? What are the concerns of and alternatives for each of the other groups of Robertson shareholders?

The acquisition bid from Simmons had failed because Simmons was not able to acquire the number of shares required to attain control of Robertson. Simmons was now looking at the possibility of a merger between Robertson and NDP. NDP was contemplating paying for Robertson using its own shares. This arrangement was unfavourable for Simmons because it will have to exchange its shares in Robertson for shares in NDP. Simmons believed that the stock of NDP had not grown at an attractive rate, and was thinly traded in the stock exchange. Therefore, Simmons would not want to retain NDP’s stock as an investment, and might find it difficult to sell it large volumes at the stock exchange. On the other hand, Manmouth’s stock was a much more attractive option when compared to the stock of NDP. Monmouth was also listed on NYSE, and it would be easier to sell the shareholding. Therefore, it was in Simmons interest if Monmouth acquired Robertson instead of NDP. However, Simmons held already paid $52 per share for a large stake in Robertson. Therefore, it was not willing to bear a huge loss on the transaction by reselling the stock for less than $50. Alternatively, Simmons could try selling Robertson stock in the market, but the stock was currently trading close to $44, which would result in a considerable loss for Simmons.