Vice President Emily Harris of the production department at the New Heritage Doll Company is looking to implement either of the two investment proposals. The proposals have been drawn up in an attempt to widen the high potential production line of the company through innovation and in hope for future growth. The whole idea behind the establishment of the company had been to provide young girls and their mother and grandmothers a product that defied generation gap that had seeped into the doll business with the emergence of modern day dolls. These dolls, unlike contemporary dolls come with unique and distinctive story lines and themes that not only enable greater imagination among young girls, but also abet development of young minds through portrayal of positive self-image.

Keeping up with this brand image and having established footing in the US toy market as an innovative startup, Emily had two very authentic product lines in the pipeline. The first of the two proposals was a Match My Doll Clothing Line expansion that was to include matching outfits and accessories aligned with the four different seasons in a year, for tween girls and their precious dolls. The other was yet another innovative step in the soil, a brand new Design Your Own Doll Line, which would introduce a web based doll design software where customers could custom make/ design their own doll figures according to their personal choice and specifications. 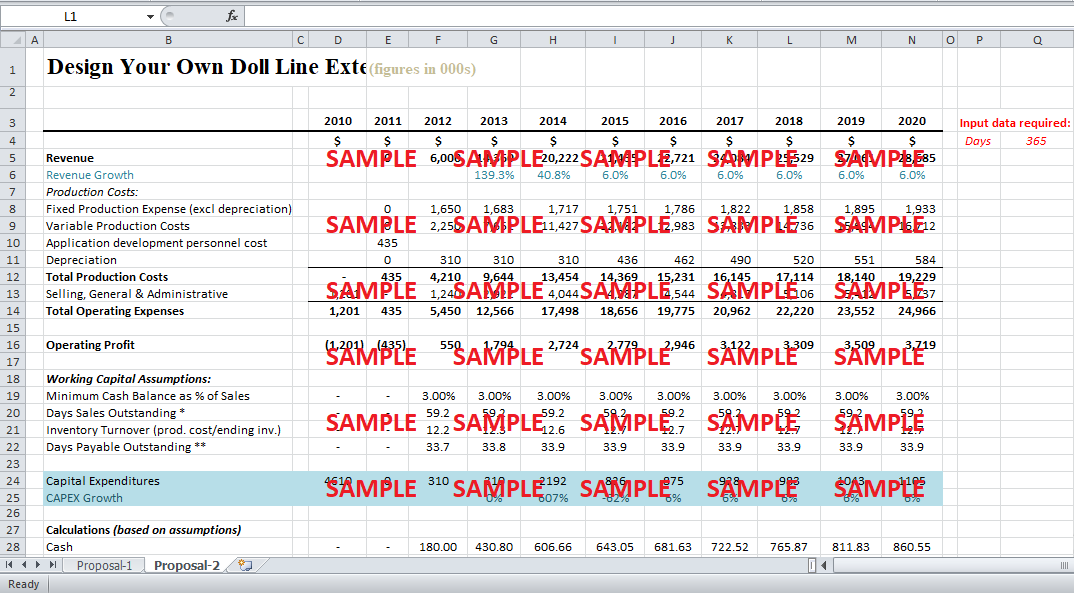 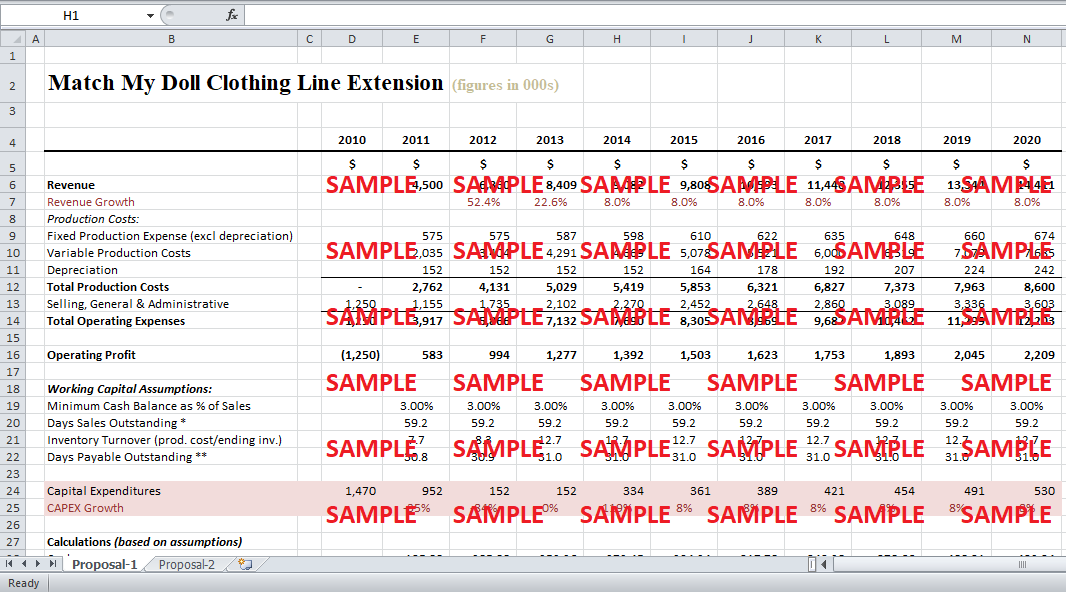 With the help of the Operating Projections provided in Exhibits 1&2, a capital budgeting analysis has been carried out to assist Emily in making the more cost effective and value adding choice. Some important values and assumptions must be discussed before diving into any further details.

Firstly, as mentioned in the case, Match My Doll Clothing Line expansion is a medium risk profile option. The variable discount rates being used by the company are based on subjective assessment of a product/ proposal’s risk. This proposal has therefore been analyzed using a discount rate of 8.4 percent, the general rate being used within this division for all moderate risk projects. However, the second option i.e.  Design Your Own Doll Line is a high risk proposal owing to the increased manufacturing complexity and investment costs of the new design software. As a result, a higher discount rate of 9 percent has been used for capital budgeting analysis purposes.

The initial R&D and marketing expenditures have been charged to general selling and administration expenses in both excel sheets and have accordingly been adjusted for tax at the rate of 40 percent as provided in the case.

Terminal Cash Flow has been calculated for both proposals to calculate an estimated value of company’s cash flows beyond year 2020. This is an essential calculation in the entire analysis, primarily because unless we calculate a terminal value, it is assumed that the company would exist only until 2020. However, the case explicitly talks about deriving this analysis based on the going concern principle, as value of a perpetuity growing at a constant rate over the years. We have assumed a conservative rate for growth of this perpetual value i.e. 3.0 percent. A terminal value has therefore been used to forecast long term cash flow growth for both proposals.

A comparison of the two analysis shows that Proposal - 1 seems more of a value addition in terms of a higher Net Present Value (NPV). A meagre difference of USD 50 assigns greater weight to Proposal - 1 which is expected to bring higher cash inflows in the coming years relative to the investment being made in it today. However, a stand-alone NPV figure does not carry much substance. An Internal Rate of Return (IRR) is yet another financial metric used in capital budgeting analysis to measure profitability of investments. IRR is that discount rate where NPV equals zero. A higher IRR seems desirable for any project but a stand-alone value does not provide much insight. IRR must be compared to a benchmark to decide whether a certain project must be undertaken or not. Therefore, we have compared our IRR with the discount rates being used in both the analysis. IRR for Proposal – 1 is again higher i.e. 24.1 percent and only 18 percent for Proposal – 2, with terminal values.  Moreover, IRR without terminal cash flows for Proposal - 2 becomes negative 0.4 percent. This is an alarming situation in case the going concern principle was not being applied in the case of New Heritage Doll Company.