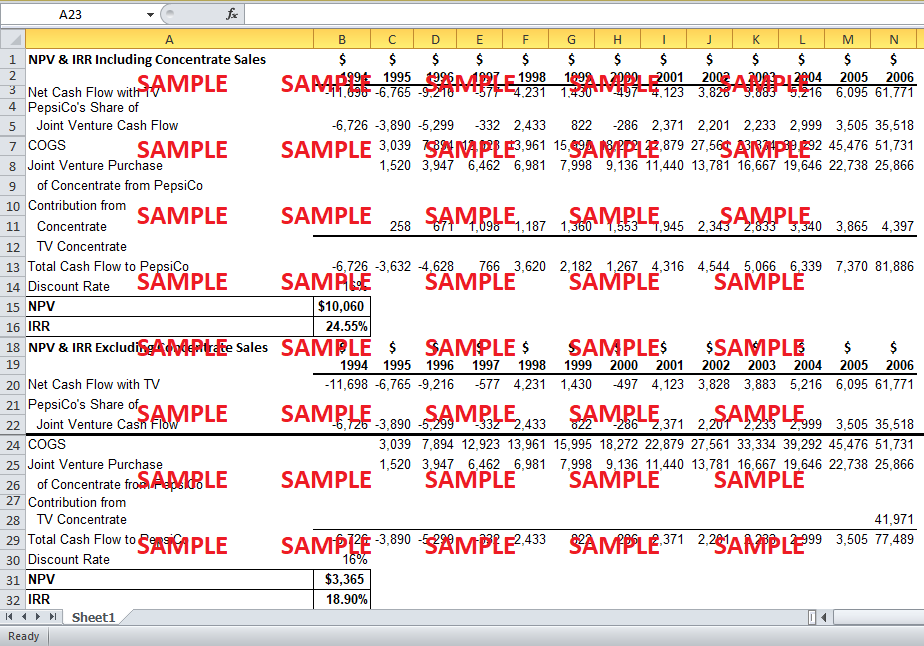 The first part of the Exhibit 1, shows the NPV and IRR calculation which include the sale of concentrate. As PepsiCo is proposing to control 57.5% interest in the joint venture. The total cash flow is multiplied by this percentage to calculate the share of PepsiCo. The weighted average cost of capital used is 16%. The Net present value is determined using this discount rate which comes out to be around $10, Million. The IRR comes out to be 24.55%. As IRR is greater than the discount rate, the value of joint venture will be positive for the company (Harold, 2008).

The second part does not include the contribution from concentrate. The NPV is still positive, and IRR is greater than the discount rate.

2. Comment on the financial projections that Pepsico used in its capital budgeting exercise, especially the NOPBT Cap, foreign exchange rate projection, and the discount rate.

The company has projected the Renminbi to depreciate as compared to US Dollar. This depreciation will cause the inflation to increase in Changchun as depreciation means currency will buy less foreign exchange units. The inflation has caused the prices to skyrocket in the coming years. Moreover, the company has used a pessimistic approach while projecting the cash flows. PepsiCo has been able to put a cap on the Net Operating Profit before Tax (NOPBT). The company has put 11% as the maximum margin that the company could have earned on sales. As the part of this strategy, whenever the projection will produce margins which are more than 11%, the NOPBT cap will trigger and will bring down the margins. The idea is to use a conservative approach and be prudent.