Pepsi is considering acquiring Quaker Oats in order to expand its business operations. However, at the time it is unsure about the value of its business and operational activities. Additionally, Pepsi also wants to find out about the possible value of synergies for this transaction. The multiple valuations show that EV/EBDITA is the most suitable for comparing the value of Quaker. EBDITA multiple of Pepsi indicates that the per share bid price for Quaker should be around $87. A premium of around 6% should also be included in this price in consideration for the effects of synergies. The bidding analysis shows that Pepsi should opt for a share for share offer. This offer may dilute the ownership of Pepsi to around 16%. 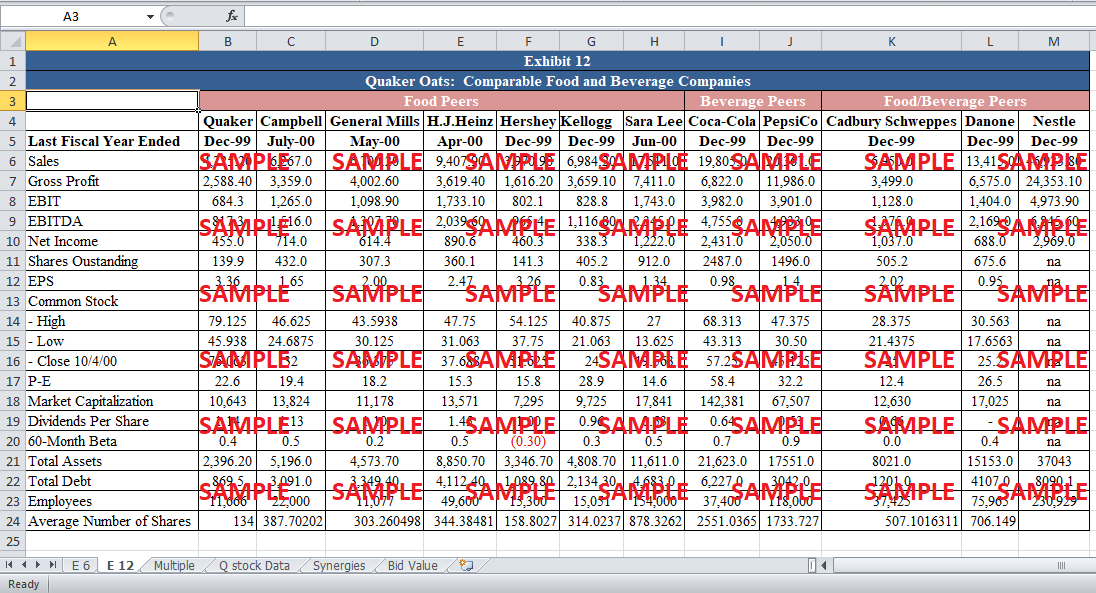 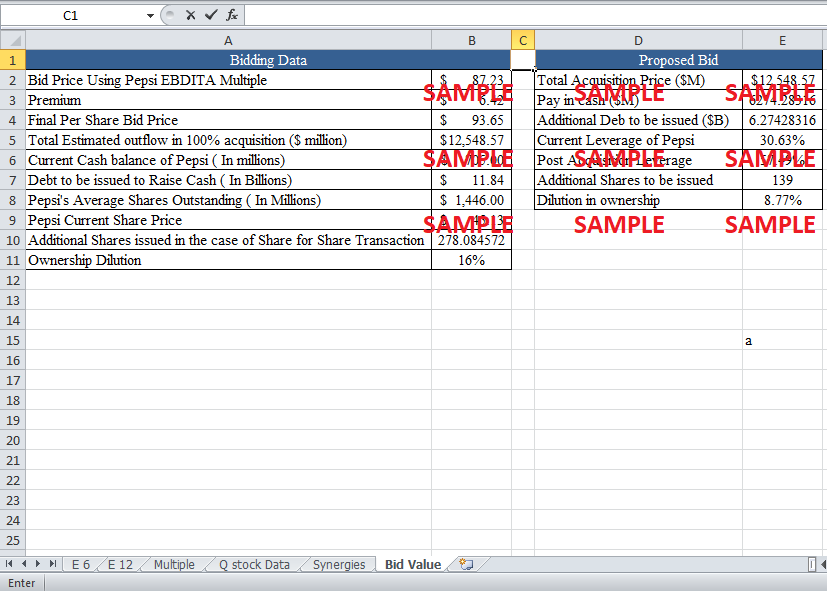 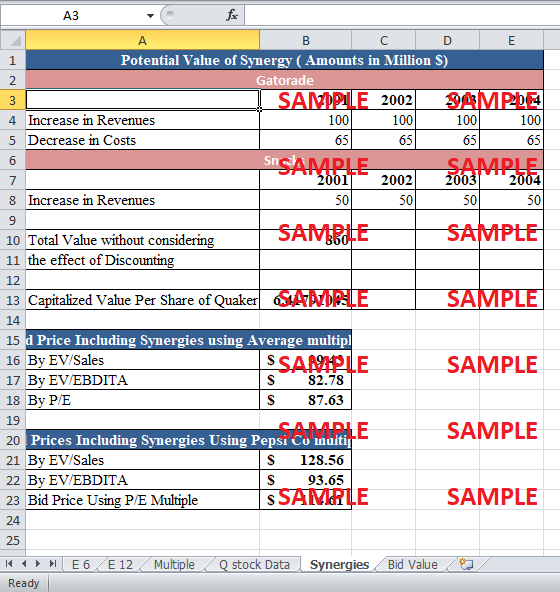 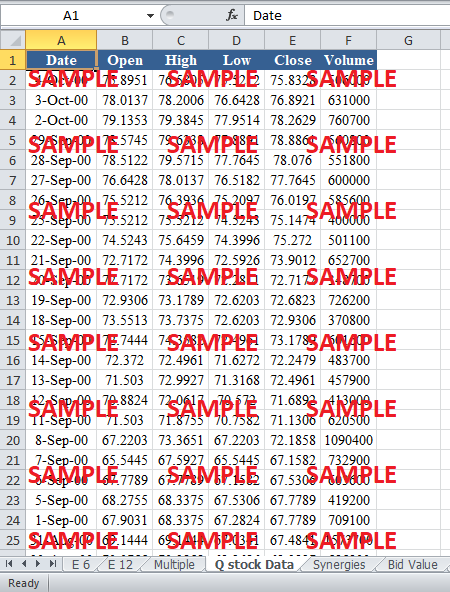 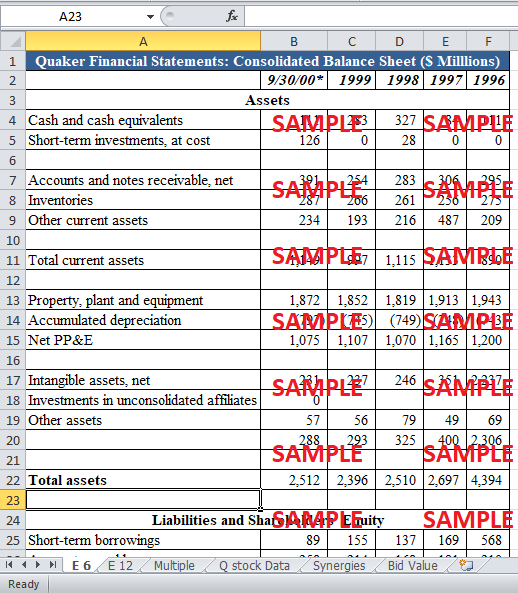 1. Value Quaker Oats (QO) as a standalone company by using both DCF and multiples. Discuss and compare these valuations and the market price of QO as of June 2000 (i.e., prior to the rumors that it is an acquisition target).

First of all, let’s calculate the enterprise value of Quaker Oats without taking into perspective the multiple or discounted cash flows. Enterprise value of Quaker comes out to be $11301 million dollars. This is the value that takes into account the September stock prices. If someone considers the year beginning prices, the capitalization stands at $9408 millions. In the valuation for this acquisition, multiples generated values can be very useful as the data of numerous companies is available. For the purpose of the valuations, three multiples are used. The detailed calculations are as follows:

This method of valuation will yield a set of values that will have large deviation because of the large differences of sales figures of the comparable companies. However, with the exception of Coca-Cola, Pepsi and Danone, all companies have relatively comparable sales figures. The analysis shows that the highest firm value will arise in the case of valuation with Coca-Cola multiples. Sara Lee relative multiple will give in the smallest value of $6077 million. The average firm value of Quaker using this multiple technique is $12462. This value is above the current market capitalization of $11301. Using the weighted average number of shares outstanding, the per share bid price comes out as $93.01.

Again, with the exception of Coca-Cola and Pepsi, the EBDITA figures are distributed in a fairly acceptable range. Therefore, the resulting value of Quaker is comparatively accurate. Coca-cola multiple once again yields the highest value for Quaker ($25543 million). Somehow, this figure looks impractical and unrealistic. On the other hand, the lowest attained firm value is $7086 million. Using the EV/EBDITA multiple of Pepsi itself, the firm value for Quaker comes out as $11688 million. This value is close to the original or real firm value of $11301 million. The per share bid price using the average and Pepsi multiple come out as $76 and $87 respectively.

2. Estimate the value of the synergies that can be obtained in a merger between PepsiCo and QO. Discuss the necessary steps to achieve them (i.e., sketch your PMI book).

Any merger or acquisition is made with the purpose of enhancing the performance of the company. Synergy represents the increase in the value of the business as a result of the merger or acquisition. Synergies may be classified into two broad classes, operational and financial. In this proposed merger, even though the exact value of operational synergies cannot be measured correctly; however, they can be pointed out. The diversification in the distribution system is the first benefit for Pepsi. This merger would also allow Pepsi to strengthen its brand base and somehow diversify it a little bit. On the other hand, the increase in revenue and cost savings can be quantified. Gatorade will not only increase revenues but will also decrease the costs; the combined effect of all these values amounts to $660 million. This value is without taking into consideration the discounting effect. In the meanwhile, the snacks division will also raise the revenues to up to $200 million. The combined effect of all these factors amount to $860 million.

Currently, Quaker has 134 million outstanding shares. Therefore, for this value of synergies, Pepsi can add an amount equal to $6.41 in the bidding share price. However, these synergies can only be attained in the case Pepsi sticks to certain values or principles. Firstly, just acquiring the target and waiting for the revenue hike is not justified. A major portion of synergy comes from the revenue increase through the distribution of Tropicana juices. Pepsi has to make sure that enough marketing efforts are produced so that it maintains its share. A part of synergy is also attributed to the cost savings through manufacturing and procurement. Pepsi has to make sure that the manufacturing sector of the merged firm is operating efficiently and up to the mark. Additionally, Pepsi has to market the new products in a different and unique way so that they don’t lose their market. There is also a possibility of ‘cannibalization’ of sales as the new snacks offered by Pepsi, even though are not a direct substitute of Lays, could negatively affect its sales.