The Statements of Cash Flows for years ended on December 31, 2008 and 2009 are as given in Exhibit 1. The assumptions made to formulate this statement are stated below.

The first assumption made is that the dividends shown in the income statement are paid during the year. This would means that there is no accrued dividend at the end of the year. Secondly, it is assumed that the accounts payables of one year are settled in the next. Similarly, the debtors of a year would make payments within the next year. Moreover, it is assumed that the increase in Short-term debt, Long-term debt and Paid-in Equity are all paid in cash during the year. In the same way, all the purchase of new fixed assets is done on cash. It is, further, assumed that all sales would be on credit. 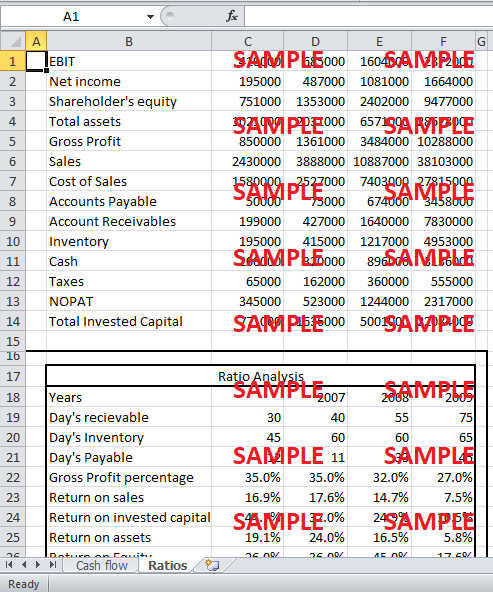 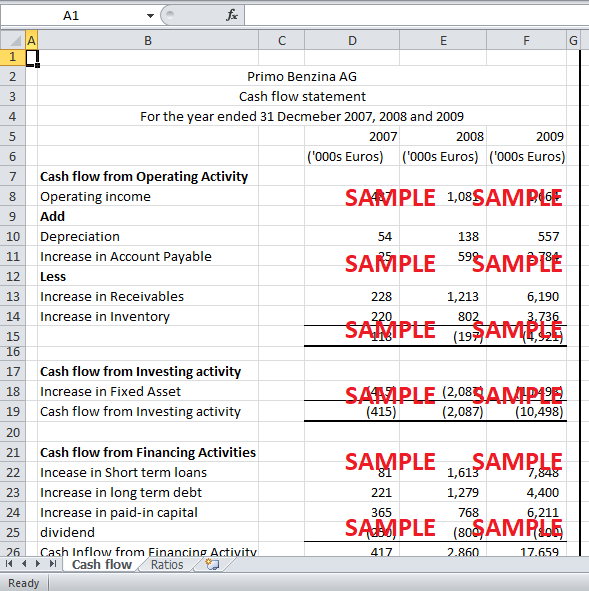 2. The cash flow pattern of Primo Benzina is as shown in Exhibit 2. Graph (A) shows the growth in total cash flow while Graph B shows the cash flow from operating activities. From the graphs, it is important to note that the there is a numerous increase in total cash flows from 2007 to 2008 and then from 2008 to 2009. However, despite the increase in total cash flows the cash inflows from operating activities are falling drastically. This proves that the major cash inflow into the business is from the short term and long term debts as well as Paid-in Equity. The critical fall in cash inflow from the operation is surprising because the sales of the company have increased significantly in 2008 and 2009.

One reason for the negative cash inflow from operations can be attributed to the short-term bonus scheme which included paid-incentive compensation depending on the earnings before interest, taxes, depreciation, and amortization (EBITDA). According to this bonus scheme, if EBITDA exceeded Euro 1 million, the employees would be given a bonus of ten percent of EBITDA. This scheme would have encouraged management to try and maximize profits by extending credit policy and ignoring cash outlay. Hence, as the profits in 2008 and 2009 are exceeding one million Euros, high bonuses are paid out in a form of cash which led to a negative cash inflow from operations in these years.

3. Primo Benzina AG does not seem in a preferable financial condition to finance three new retail facilities. Firstly, as shown in Exhibit 1, the cash flow of the business operations is negative and unless the management does not change its policy to improve cash inflow this new investment would be detrimental to the business. Secondly, the initial investment of 3.402 million Euros is too high for the business to manage. Moreover, the equity of the company is also a problem. Schroeder, the company’s Chief executive officer and major shareholders, has refused to dilute his shareholding, which means that new shares cannot be issued to finance these projects. He has also refused to invest additional equity into the business. Another important fact is that the company is anticipating increasing problems in dealing with the Deutsche Bank. Thus, as the Bank is foreseeing low profitability for business in the future, it will provide no future credit limit extension or any loans in time of crisis. Therefore, it is better if Primo Benzina AG does not hurriedly invest in more retail outlets at the moment.

To be in a good condition to invest in these three retail outlets, Primo Benzina AG should change its bonus scheme for management. The bonus plan should be based on cash outlay rather than profits because a business cannot survive in the long run with cash problems. Cash is necessary to meet day to day running of the business. Furthermore, profits can be manipulated by attracting customer through extended credit limits. However, cash cannot be manipulated and easy to monitor. Thus, a change in bonus plans will help the management improve the cash outlay of the business. Once the cash inflow improves, the company would be able to take on more risk by opening more outlets and by convincing the Bank to corporate in times of crisis.

1. Exhibit 3 states the certain ratios for Primo Benzina AG which help analyze the company in a better way.

2. Over the years, Primo Benzina AG (PBAG) has extended the credit to its customers. This is obvious from the fact that the days receivable has increased significantly from 2006 to 2009 (exhibit 3). When compared with the figures of the competitors, it is seen that in 2008 and 2009 the figures exceeded those of PBAG’s competitors. Due to extended credit facilities, the inventory turnover has also increased significantly over the years and has exceeded the inventory turnover of the competitors. Moreover, the cash flow problems can be inferred from the fact that the number of days taken to pay the creditors has increased significantly in 2008 and 2009. In 2009, this figure has exceeded industry’s average and even those of competitors. The ROE, ROA, ROIC, ROS and GP margin all seem to follow a similar trend. Although all these figures are higher than those of competitors, these figures seem to fall after 2007 which is not a good sign. This indicated that the business is inefficient in using the invested capital, and expenses are not properly controlled as the business is expanding.

3. If, I were to invest in this industry, I would most probably invest in Schnell AG. This is because PBAG seems to have a lot of cash flow problems. Unless, it reduces its credit policies and alter the bonus scheme, the company might not survive in the long run. Therefore, according to Exhibit 4 in the case, Schnell AG has the highest return on asset, return on invested capital and return on sales. Therefore, Schnell seems most profitable keeping in view the given information. Although, the GP percentage for SparPetrol AG is the highest but their return on sales is significantly low showing that expenses are not efficiently controlled by the company. Nevertheless, more information about the cash flows of the competitor is required to choose the most profitable business to invest in.