Siemens AG was one of the largest global companies manufacturing electronic products. It was divided into seven groups and five corporate divisions. The largest group was Energy Automation Group, under which Electric Motor Works (EMW) operated. EMW produced low voltage motors for several applications. In the 1970s, the company produced 20% custom motors, while 80% were standard motors. However, the Eastern Bloc countries had meager labor costs and were giving fierce competition based on price. EMW decided to change its strategy and revamped their whole production environment. 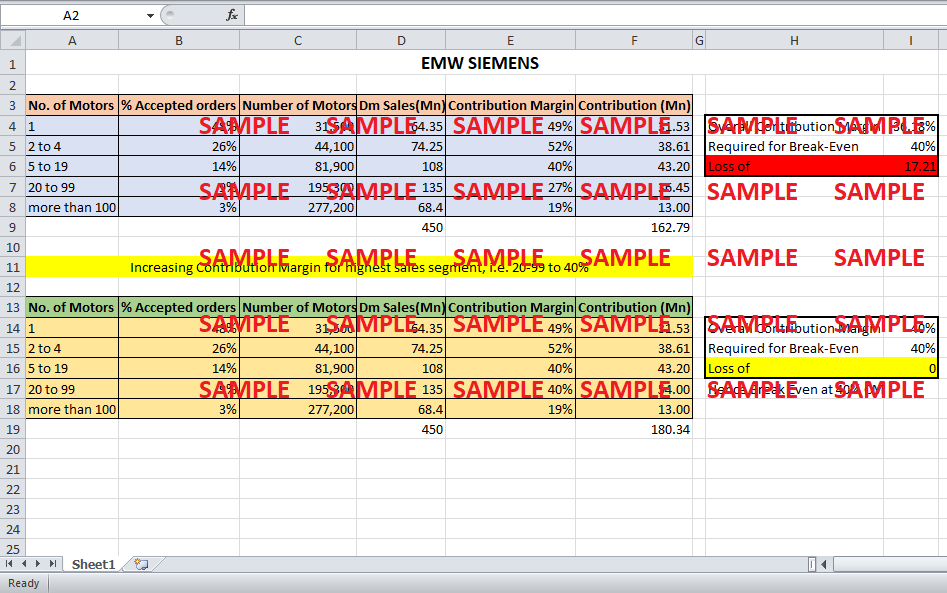 Automation was used to produce significant volume standard components, while low volume parts were made by hand. Siemens had two different divisions looking after orders and pricing; EMW and Sales Division. EMW was responsible for evaluating requests and production while Sales Division provided orders and customer information. Transfer pricing was determined by EMW’s estimated cost of production and the Sales’ knowledge about the customer’s expected price. For profitable orders, transfer price was the combination of factory cost, and one-third portion of profits earned, for unprofitable orders transfer price was variable price added to three-fourth of the contribution made. The strategy allowed EMW to break-even. However, a change in approach to become more competitive made this system obsolete, and a new costing system was introduced. It relied on the size of the order to quote the final price to the customer.

2. The traditional cost system used by Siemens was not sufficient for the new strategy. The system was unable to accommodate the relationship between increased support costs and different product mixes. The traditional cost system could not allocate costs appropriately with the increasing demand for custom-made orders—the new method of costing allowed EMW to quote the standard price incurred per unit for each order. Sales would then apply a discount factor depending on the number of units. For motors previously produced by EMW, estimates were simply drawn from the catalog and adjusted for the volume using discount factors. For new orders, EMW projected these costs, and the customer paid for tooling.