In the United States, New Balance is one of the biggest shoe manufacturers. As a "one-man operation manufacturing" company, New Balance had its start in 1906. It's now a worldwide brand with a solid reputation. It's safe to say that New Balance is a globally recognized brand. To meet consumer demand, a broad range of high-quality shoes are being produced. Athletes like Usain Bolt, Usain Bolt, and others have endorsed New Balance's sports footwear. New Balance has a great chance to reach out to young guys between the ages of 12 and 18. At an affordable price range, they created a medium-tech running shoe for their sponsor, Kirani James. James is a promising Olympic runner who is just in his twenties.

Monte Holiday, the company's senior vice president of product development, identified a potential in the 12- to 18-year-old male market. New Balance's opponents have yet to take advantage of this chance. Athletic footwear for individuals aged 18 to 24 years old has already received Usain Bolt's endorsement. However, New Balance was unable to participate in the race and compete in this section due to a lack of resources. As a result, New Balance saw an opportunity to reach a younger demographic in the market. A successful marketing and advertising campaign centered on the appropriate athlete may have significant effects on the company's bottom line if it could design shoes for 12- to 18-year-old males. In the 400-meter dash in London, Kirani James of Grenada won gold medals in the 400-meter sprint and 400-meter relay. In his youth, he has the potential to become a great athlete, which will draw in a younger demographic. 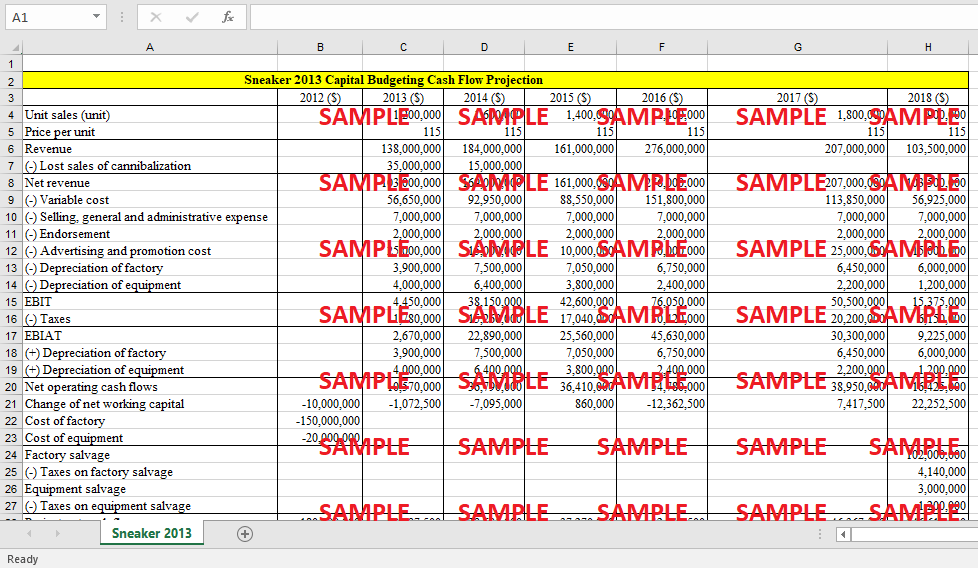 As new items were introduced by competitors, the competition was strong. Despite the slump in the economy, the shoe market continues to rise. The VP requested Michele Rodriquez to analyze two goods, Sneakers 2013 and Persistence, and she agreed to do so. The VP also wanted recommendations in order to choose the best choice for the project's commencement.

b) The projected net cash flows for the years 2013, 2014, and 2015 are $14.5 million, $22.4 million, and $46.7 million respectively. The cash flows were calculated by starting with the Persistence revenue and then subtracting variable cost, selling general & administrative expense, advertising & promotion expense, and cost of technology. This led us to the Earnings before Interest and Taxes (EBIT). The EBIT figure was then adjusted for the taxes and depreciation was added back since it was a non-cash expense. Then, the changes in (NWC) were added to the figure which led us to the final figure of the net cash flows for 2013, 2014, and 2015.

c) The terminal cash flow for the Persistence project came out to be $44.4 million. The figure was calculated by using the net income which was calculated by taking the total market value of $462 million multiplied by 20% which gave us the revenue of $92.5 million for the year 2015. Then the total variable cost, selling general & administrative expense, advertising & promotion expense, and cost of technology were subtracted from the revenue to arrive at the Earnings before Interest and taxes (EBIT) from which the taxes were subtracted to arrive at the net income of $27.8 million. The depreciation for the equipment of $1.5 million and the Net Working Capital (NWC) was added to the net income which gave the value for the terminal cash flow of $44.4 million.

2. Which project do you think is riskier? How do you think you should incorporate differences in risk into your analysis?