Both Stanley Works, Inc. and Black & Decker Corp. manufacture industrial tools and domestic hardware in related fields. There has been a slew of different combinations of strategies put out in the past. A range of merger possibilities are shown in this case study to highlight how acquiring corporations may generate value and new prospects for their acquires. Additionally, the merger itself is fraught with corporate governance concerns relating to executive members and the merger's effects. In return for $3.6 billion in its own equity, The Stanley Works agreed to buy Black & Decker in 2009. For this reason, 50.5 percent of shares in the merged firm is owned by The Stanley Works' management and board members, as well as its shareholders. The merger resulted in a $350 million yearly savings for the merged corporation. The merger of the two firms will have a good influence on revenue growth and market dominance, since both companies have minimal concerns. 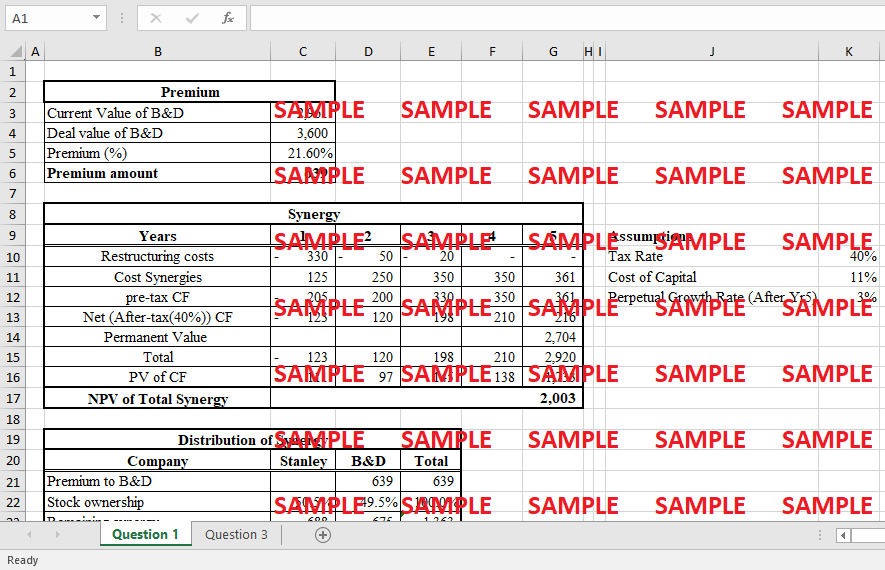 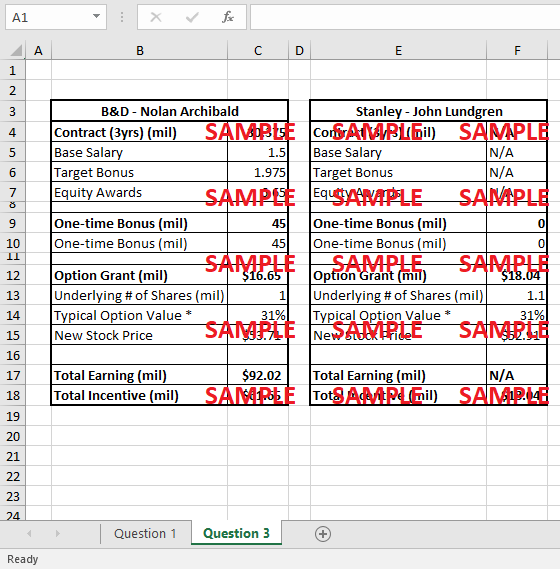 1. What is the incremental value to shareholders of the cost savings (synergies) projected in this merger (use a discount rate of 11%)? How will the value of the synergies be shared in the proposed transaction? What is the impact of the payment method on the distribution of the synergy gains?

The incremental value resulted from synergies is $2,003 million. This was calculated by subtracting the restructuring costs from cost synergies which resulted in the pre-tax cash flows. The next step was to calculate the after-tax cash flows by applying a tax rate of 40% to the pre-tax cash flows calculated in the previous step. The terminal value after year 5 was also calculated using the perpetual growth rate of 3% and the cost of capital of 11%. The total cash flows in each year were then discounted at the rate of 11% which gave us the present value of those cash flows. The present value of cash flows in all the years were added which resulted in Net Present Value (NPV) of total synergy which was $2,003 million.

When a payment for a merger is paid in stock options, it is usual for stakeholders to become unclear about who owns which company. While cash acquisitions are feasible, the acquiring company maintains control over any new organization that is formed. Because of previous mergers that failed due to arguments over power, this may be a great benefit for the company. In this case, the acquired synergies will be put to use by the acquiring business, which will boost the value for shareholders. When you grant stock options, you diminish the value you create for your stockholders. The purchasing company would be putting itself at more risk if the synergies didn't work out, but they would reap all the rewards if they did.

Stock options might be a great alternative as a method of payment for the acquiring firm. Stock options may be offered in lieu of a one-time payment to the acquiree. So, they may minimize their losses and free up finances for future endeavors as a consequence. Not having to pay in full up advance may be quite advantageous if the merger has other expenses in addition to the payment. In this case, a one-time reorganization costs $400 million. If the deal was not paid in cash, The Stanley Works, Inc. would have no trouble covering the costs of the reorganization. Mergers may be paid for through stock options since the risk is shared with the target company. If the synergy premium paid does not materialize, then the acquiring company faces the whole risk of the merger. a. Stock options may be used to finance the merger by the acquiring business, reducing some of this risk.

2. After failing to complete a merger following the three prior attempts noted in the case, why should the proposed transaction be successful this time?