The case makes a note of the role of a financial analyst, whose job is to evaluate and suggest investment decisions for the firm. As is the case with any scarce resources, such as money, it is imperative that they be utilized in the most efficient and productive way possible. As such, a firm is always confronted with possible investment decisions that it must indulge in, in an attempt to obtain substantial financial rewards. The role of an analyst is to use metrics and tools at his/her disposal, like a detective, to search out the right investment for the firm that maximizes its return, ensures a reasonable payback and judiciously manages risk. In this case, the analyst is confronted with 8 different projects, from which he/she must suggest the four most suitable ones, at an implied cost of capital of 10%, with projects 7 and 8 being mutually exclusive. 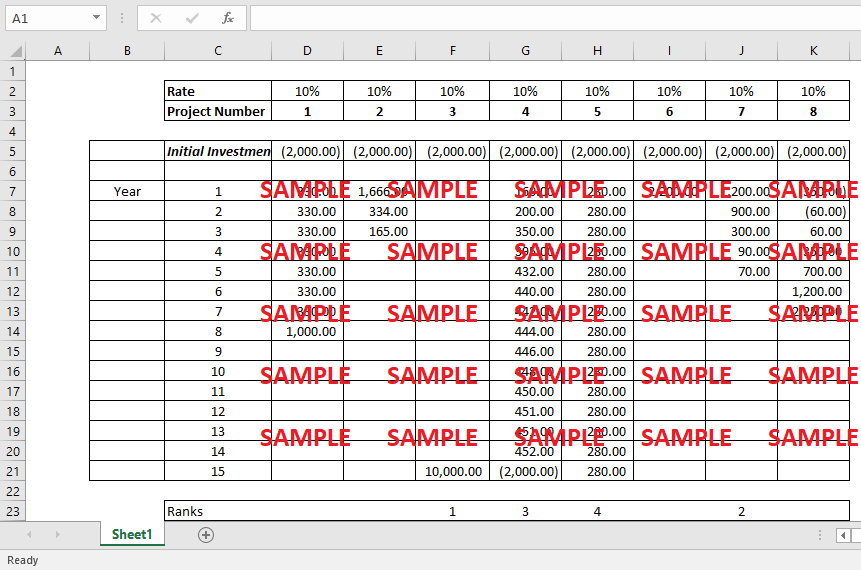 Case Analysis for The Investment Detective

1. Can you rank the projects simply by inspecting the cash flows?

Despite the prevailing notion that money is what it is, i.e., a $100 is a $100, it does not hold true in the world of finance. Hence, though cash flows on their own do showcase the worth of a project to some degree of certainty, they do not, however, portray the complete picture as substantial elements are left out of the analysis. Only analyzing cash flows allow us to ascertain the time after which will recoup our initial investment. That is, it does allow for the calculation of the payback period and also showcases the fact that will earn/receive more than the initial invested amount. But even that does not hold true as the quantity of money received from perceived future cashflows is different from their actual value due to the concept of opportunity cost and the time value of money. It is one of the fundamental pillars of finance that dictates that a dollar today is not equal to a dollar earned tomorrow. Rather the discounted value of a dollar tomorrow at the right applied rate is equal to a dollar today. This has to do with the concept of inflation and money losing its value over time. As such, just looking at cash flows allows us to ascertain payback periods and the sum of the amount retained from investments. It does not factor in investment rates, that is, what the initial money could have yielded had it been invested elsewhere. In a high-inflation environment, required rates of return would also increase. Otherwise, the investment would be net negative in real terms (adjusted for inflation). Therefore it would have to resort to other quantitative methods, apart from payback periods and the sum of total cashflows obtained, which factor in required rates of return, prevailing inflation environment, and risk levels of the project, among other things. Alternate methods can be applied to ascertain and deduce which investment decision would yield the greatest benefit. These include, and are not limited to, Net Present Value, Internal Rate of Return, Modified Internal Rate of Return and Profitability Index, among others.