There is no doubt that the measures introduced by Chip are of great value to the University. Chip has done well to improve the performance of the Auxiliary services. As the results from the financial analysis indicate, the company has produced better financial results in 1996. The bookstore has reported profits for the first time in five years. The profits, albeit small, are expected to increase during the next year. Similarly, the dining centre has also reported a decrease in the proportionate gap between revenues and expenses. Indeed, Chip has helped them save a few hundred thousand by removing the outsourced company Chuckwagon. The introduction of an automated system for workers in the physical plant is also a constructive measure. 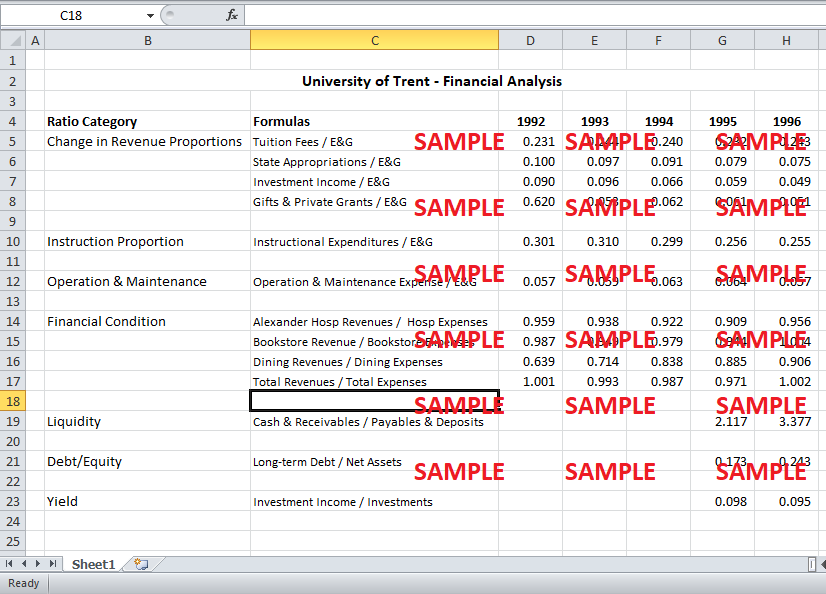 Case Analysis for University Of Trent

1. Analyze the financial position of the University of Trent using the data in Exhibit 1A and 1B.

University of Trent has launched an extensive funding program where they are seeking to gather donations for their future operations. However, the historical financial performance of the University is viewed as not providing adequate assurance to the donors. Trent has increased its revenues consistently, but the expenditures have increased at an even more drastic rate. Thereby, the company has not been able to control its expenses and has run into losses. We present a trend analysis of the financial performance of the university over the past few years. The income statement ratios are calculated for the past five years, while the balance sheet ratios are calculated for only the past two years due to non-availability of relevant data.

It has already been mentioned that the major problem with Trent’s financial performance is viewed to be the relative changes in revenues and expenses over time. It is believed that the revenues have decreased in proportion to expenses. It is important to look at the ratios to verify this trend. These set of ratios are classified as ‘change in revenue proportions’ in the attached spreadsheet. The revenue from tuition fees, in proportion to education and general expenditure (E&G), has oscillated up and down over the past five years. The proportion of tuition fees increased from 1992 to 1993, but decreased over the two years (1994 and 1995). In 1995, the proportion of revenue was similar to its initial level of 1992. The revenue from tuition fees increased once again in 1996. However, the uncertain movements in this proportion prevent us from predicting future progress. Overall, it can be said that the tuition fees have increased slightly in proportion to expenditure, during the period from 1992 to 1996.

It is also important to conduct a profitability analysis of the independent revenue centers of the University. These revenue centers include Alexander hospital, bookstore, and dining centre. Ideally, these independent operations should be generated sufficient revenue to cover their expenses. A ratio of their revenue to their expenses has been used to determine their operating performance. A ratio that is higher than one implies that the operation is generating profits, where a ratio that is lower than one indicates loss-making operation. Before we delve into the profitability of these operations, we look at the overall ratio of total revenues to total expenses. The ratio starts from 1.001 in 1992, before declining to 0.971 by 1995. However, the ratio jumps back to 1.002 in 1996. In other words, the company is able to cover its expenses in 1992, but it starts making losses at an increasing rate during the next three years, before jumping back to a profitable position in 1996.