Valmont began its operations in 1946 by manufacturing farm machinery. Over the years, the company grew into a successful enterprise and went public to increase its resourcefulness. Valmont enjoyed excellent growth, and was on the fifth position in Fortune magazine’s ‘ten highest’ list in 1988. However, Valmont suffered drastically during the recession in the United States in the year 1990-91. From a record year in 1989, the company went on to record a loss of $8million in 1991. The company also tried restructuring its operations and cost cutting, but the situation demanded measures that were more drastic. In 1993, Valmont’s operations were divided into two divisions: irrigation division and industrial products division. Valmont was the market leader in United States in the mechanized-irrigation industry. However, the demand for mechanized irrigation systems was driven by farm income and interest rates, which made it a very cyclical industry. The revenues for the industry were greatly affected by the economic crisis in the early 1980s, and a similar drop in revenues could be associated with the recent crisis in 1990-91. The industrial products division at Valmont contributed 70% of the total revenues and 58% of the total profits for the company. The division could be further divided into two segments: industrial and construction products and Valmont electric. Valmont electric had a small market in its industry. The revenues of the industrial and construction products segment are almost twice as much as the revenues of the electric segment. 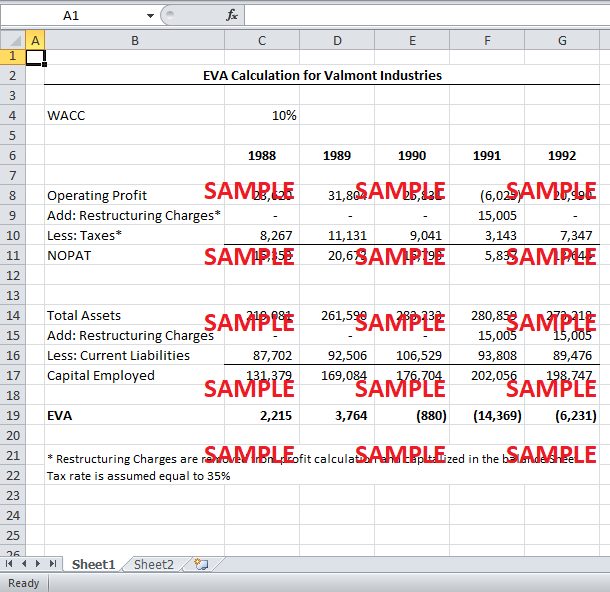 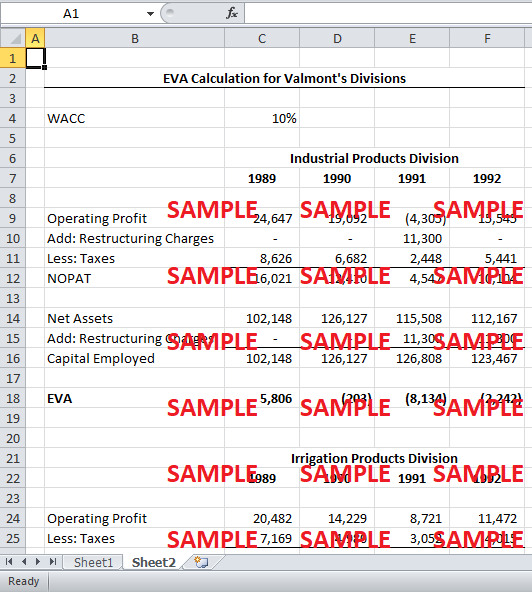 Economic Value Added (EVA) estimates the economic profit generated by a firm rather than accounting profit. It measures the value created in addition to the return required by the company's investors. In simple terms, EVA is the after-tax operating profit earned by a firm less the dollar cost of financing its capital. The main idea behind the calculation is that a company only creates value its profits exceed the return required on the firm's capital employed. EVA implies that it is even possible for a profitable company to destroy shareholder value if it is generating a return less than its cost of capital. Finance professionals argue that EVA is the more appropriate approach towards measuring the performance of the company than focusing on traditional accounting measures such as profits and earnings. In essence, EVA is very similar to the net present value approach. Theoretically, a project with a positive EVA is also expected to have a positive NPV and vice versa. However, EVA is much easier to apply as it requires the use of some basic arithmetic, and can be easily applied of a firm-wide basis.

The attached spreadsheet reveals the calculation of EVA for Valmont. The calculations involve some basic adjustments to the accounting income calculations. The operating income is adjusted for non-recurring items that results in large short-term accounting changes, but are actually expected to affect the company’s performance over a longer time-period. In Valmont’s case, one such item is restructuring cost is the year 1991. The restructuring cost appears to result in a huge outflow in 1991, but it is a nonrecurring expense that is not expected to be incurred regularly. The economic impact of the cost would be realized over a longer time-period in the form of cost savings and efficiencies. Therefore, it is more appropriate to remove the expense from the income statement and capitalize it in the balance sheet. It is worth mentioning that the capitalized restructuring will continue to be included in the balance sheet even if after 1991 – the year in which it was actually incurred. The taxes have to be recalculated in accordance with the calculated operating income. For this purpose, the tax rate is assumed to be 35% for each year. The capital employed each year is calculated through the net assets approach where net assets are equal to total asset minus current liabilities. The trend in the EVA over the past few years is shown in the following diagram:

It is evident from the diagram that the company has experienced a considerable decrease in its EVA from 1989 to 1991. Although the EVA has improved in the most recent year (1992), it is still negative for the overall company and its industrial products division. The irrigation division has performed relatively well, and has registered a positive EVA even in 1991 – the worst year for the company. It should be noted that the overall EVA of the company is lower than the sum of the individual EVA of the two divisions because the corporate overheads are not included in the EVA calculations for the divisions. The reason behind this treatment is that EVA calculations are based on operating income and corporate overheads do not constitute an operating expense for the division. The drop in company’s performance during the year 1990 and 1991 can be attributed to the economic crisis in the United States. The cyclical nature of the company’s products led to a reduction in company’s revenues during this period. Therefore, the drop in revenues is positively correlated with the drop in EVA. Nevertheless, the net income is still positive during the period while EVA calculations reveal that the company has actually destroyed value for its shareholders. It is clear that the industrial products division is performing considerable worse than the irrigation division. A potential reason for the poor performance of industrial products division could be its electric segment, which is discussed in the next section.