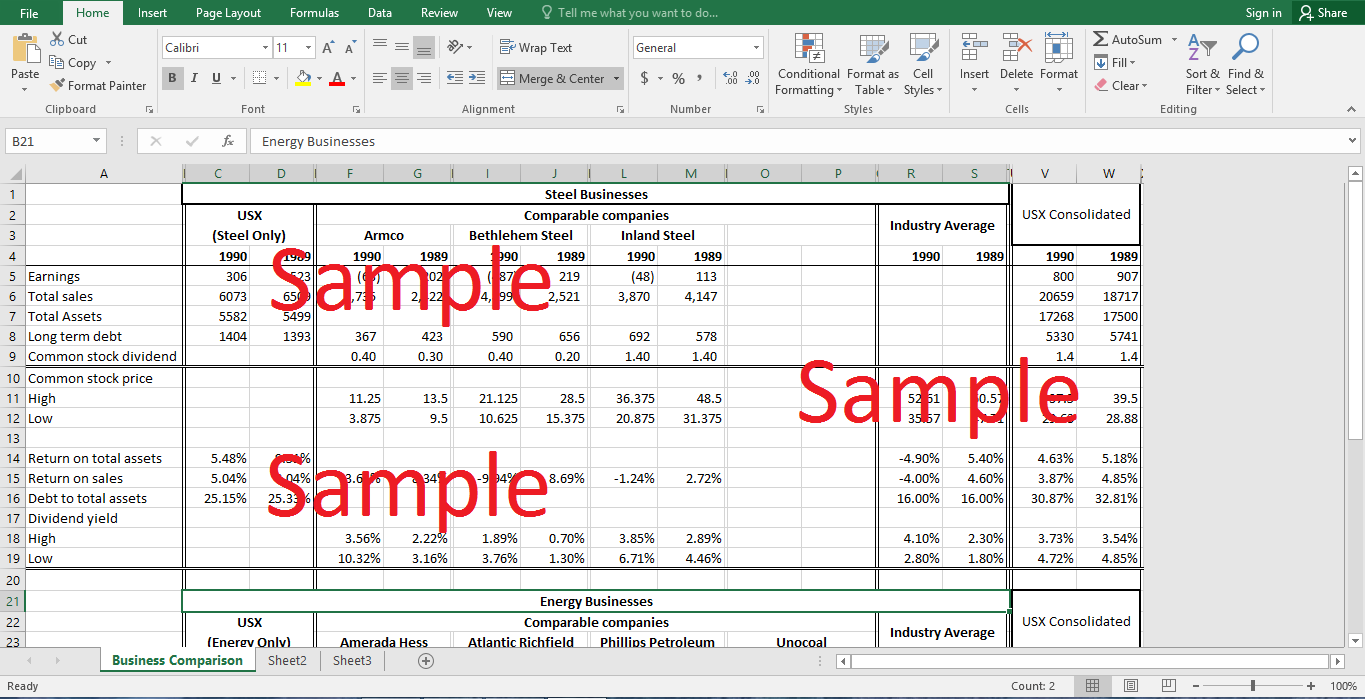 1. In 1986, then-chairman and CEO David Roderick described USX as possibly one of “the most restructured corporations in America.” Even so, Carl Icahn believed that further restructuring of the company was still necessary. In late 1990, what operating and/or strategic problems, if any, do USX’s two main businesses still face that would warrant some form of additional restructuring?

(Refer to the calculations done in the attached excel) Looking at pure operating ratios; return on assets and return on sales figures, it is evident that in terms of operational performance, the U.S Steel section is performing better than the comparable companies and the industry average while the U.S Energy section is performing approximately just at par with the industry. Still, the company’s consolidated stock price is lower than individual average industry steel and energy stock prices. This shows that USX has overcome most of its operational problems by continuous casting innovation and operational restructuring done throughout the 1980-90 decade. Stock prices that are still low might be because of strategic problems.

USX’s is a highly leveraged company as compared to the industry average. Debt to assets ratio is much higher than steel and oil industry trends. This is one of the factors that drives down shareholders perceived value of a firm and is reflected in the stock price.

USX’s businesses faced many strategic challenges. These problems existed overall in the entire industry and affected all steel companies:

Overall, it seems that the company was undervalued by investors because of the overall industry problems in the Steel business, and the investors attributed these problems to whole USX and undervalued the company’s stock.

2. Do you think there is any merit in Carl Icahn’s claim that problems in USX’s steel business are depressing the value of its energy business? As a USX stockholder, how credible a spokesperson do you consider Icahn to be on this issue?

A firm’s value can be low because either it is being undervalued in the market or it is actually of lower value due to its business problems. Looking at the overall industry conditions in the steel industry and comparing USX steel section with comparable steel companies, it can be concluded that USX’s operations are up to the mark and better than the competitors. The return on sales is better than the comparable companies and industry, and the return on assets is better than the industry average. This can be attributed to as the case mentions, USX’ operational improvement steps of adopting continuous casting method and reducing direct costs of per ton steel production. From this, it can be concluded that by 1990, USX did not have a business or operational problems. However, from the industry background explained in case, the general steel industry problems of declining prices and lower prevailing demand might be factors leading to investors’ apprehensions pertaining to steel companies and due to which USX’s steel business is also undervalued.

To find whether or not the steel business is the reason why overall USX value is low, the USX energy section’s performance and stock price have to be compared with the similar companies. USX is actually performing lower than the industry average in terms of return on the sale. Companies with return on sales ratio equivalent to USX have round about the same value as USX. Companies with higher stock price also have a higher return on sales. Hence, it can be concluded that USX’s energy sections performance itself is below industry par. Thus, to say that USX steel business is the sole reason of overall USX low value is incorrect. Therefore, Carl Icahn’s claim is flawed and lacks sound mathematical/financial backing.

3. Which restructuring option — Icahn’s spinoff proposal or the company’s targeted stock proposal — will create the most value for shareholders? For creditors? For the firm’s other stakeholders?

It is a complicated issue with no right or wrong Solution because of the subjective nature of valuation. However, the pros and cons of both options; the spinoff and targeted stock can be weighed, and recommendations can be made.

The benefits of a spin off and targeted stock are essentially the same, i.e., giving the investors in the market the ability to more accurately value USX; however, the costs associated with a spin off were much more as opposed to going for targeted stock. A spin off would eliminate the operating synergy between the energy and steel segment that USX currently enjoys. It would also remove the diversification within USX for which the company had strived in the whole of the previous decade. A spin off would also most likely be taxable resulting in a corporate level tax and shareholder level tax for USX. More additional costs would include administrative expenses, income taxes and insurance, estimates of which were calculated to be around $30 million, $20 million and $15 million respectively. In addition to this, the biggest challenge facing a spin-off would be the un-assignable nature of USX’s long term debt without the lenders’ consent. USX’s debt will have to be refinanced at current market rate of 11.7%. Moreover, if a separate steel company is established as a result of a spin off, its dividend paying ability will be in doubt as a new IRS rule mandating accruing the employee health care conditions. Thus, share value of the steel company would be highly depressed due to its future inability to pay dividends.

Under these circumstances, the alternative option of targeted stock gives USX the ability to enjoy the benefits of a separate stock, without incurring all the costs associated with a spin off and letting go of its operational synergies and diversification. For all the stakeholders of the company; the shareholders, creditors and employees, the targeted stock option seem apter.

Targeted Stock is most appropriate for a company if it is facing these two challenges with regards to its lower market share price;

In these situations, a company should go for a targeted stock because it will reduce the information gap between the company and the capital markets while keeping the operational and strategic advantages of a unified unit intact. Thus, a targeted stock is desirable for a large diversified company seeking to increase market value by offering investors more transparent information.

However, a targeted stock will not be very apt in case the company is seeking to increase value but has the following characteristics or problems;

Under these circumstances, the firm value is not expected to increase by issuing targeted stock as the depression in the company’s value is actually attributable to operational underperformance, which should be settled by improving the operations rather than restructuring. Agency problems likewise are not addresses by targeted stock as managements control over corporate assets remains the same.