An investment advisor of a brokerage firm, Sabrina Gupta, was studying stocks and valuation of Wal-Mart Stores, Inc. Wal-Mart, founded by Sam Walton, was the one of world’s largest retailer store operating in all 50 states and internationally in many countries. The immensity of Wal-Mart operations can be estimated by the fact that it had 2.1 million employees, who served around 200 million customers per week. The purpose of Gupta’s assessment and valuation of Wal-Mart stocks was to determine whether she should urge her new and existing clients to incorporate these stocks in their portfolio.

To determine whether Wal-Mart stock is fairly valued, different valuation techniques have been applied. Following are the names of techniques: 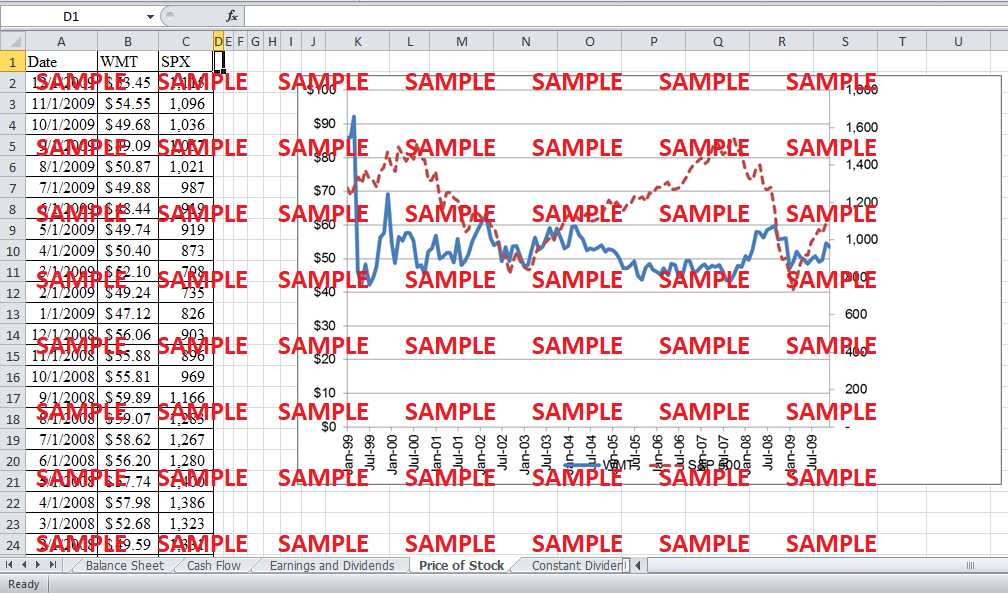 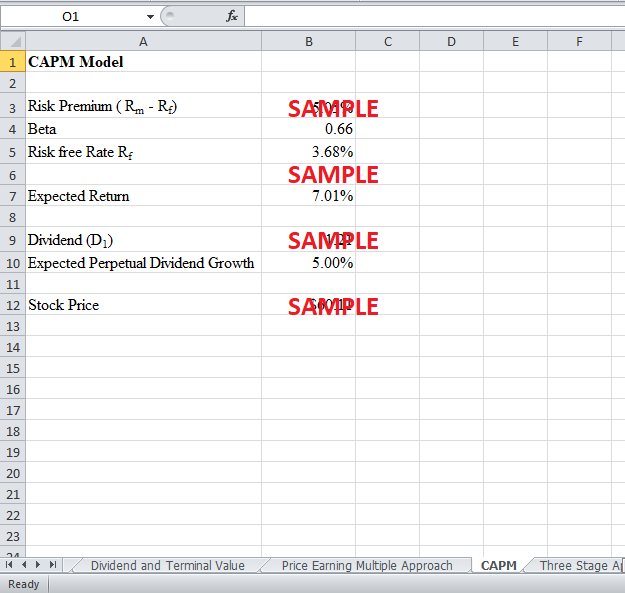 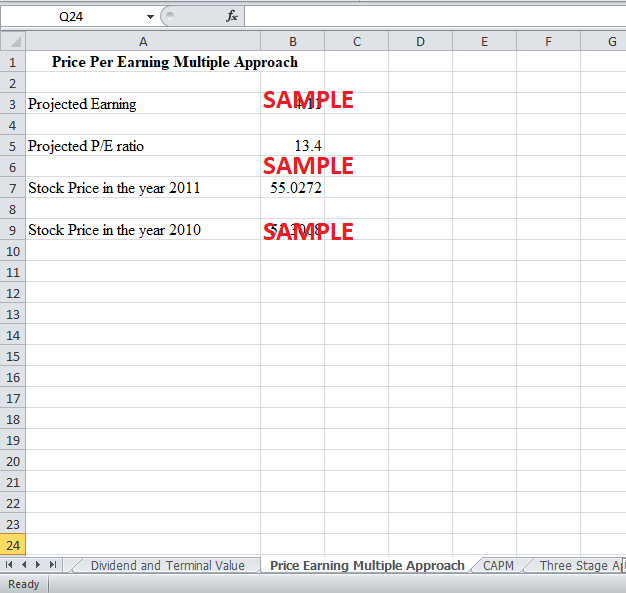 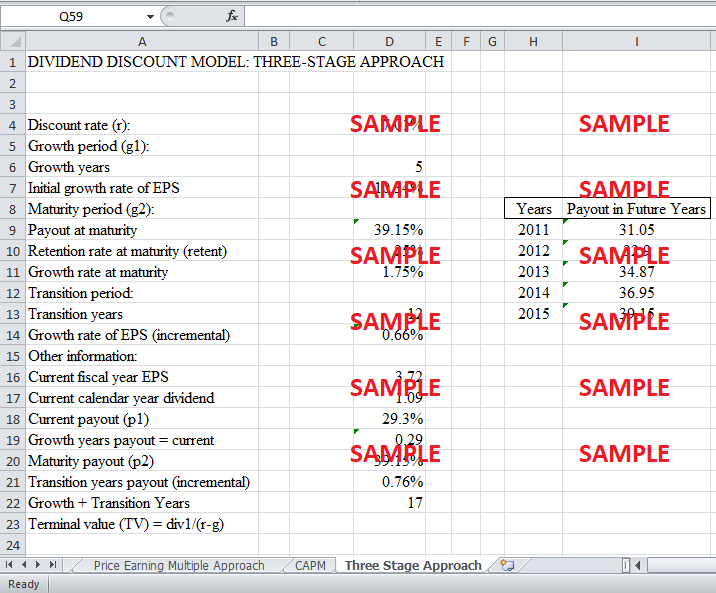 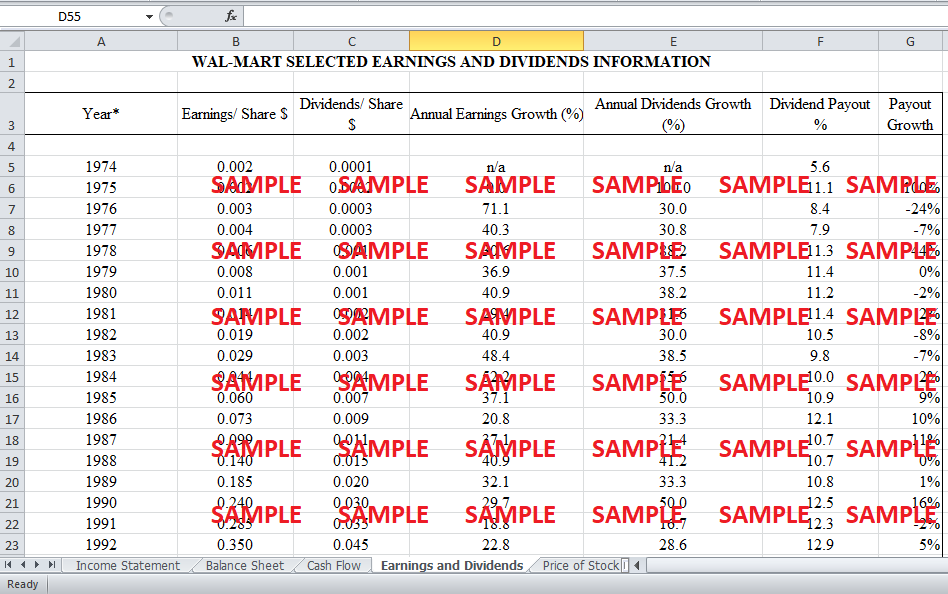 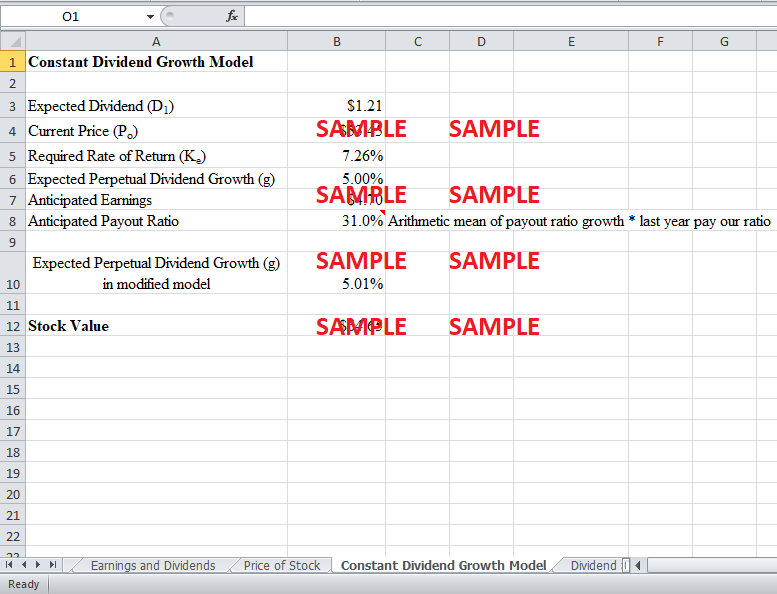 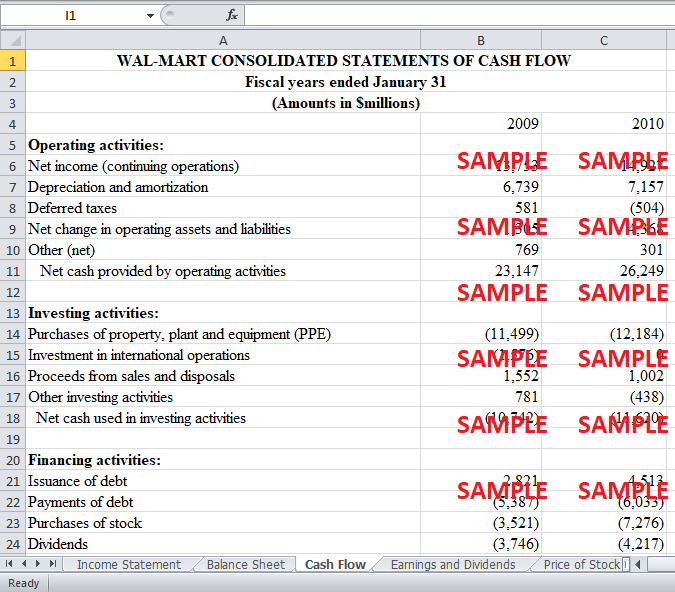 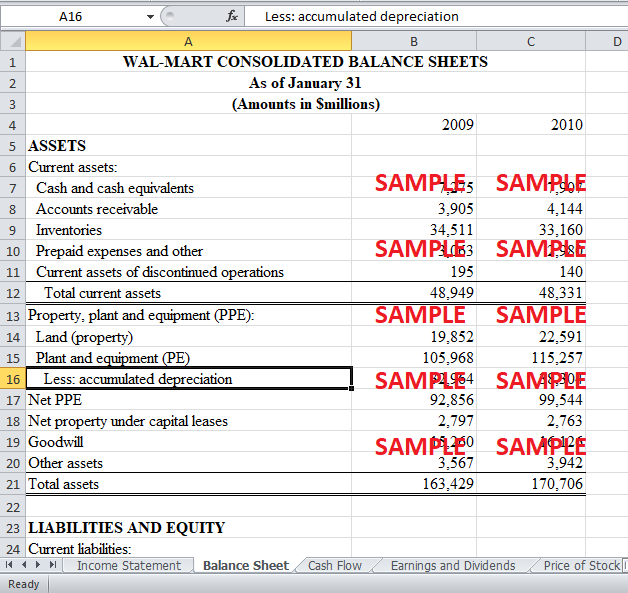 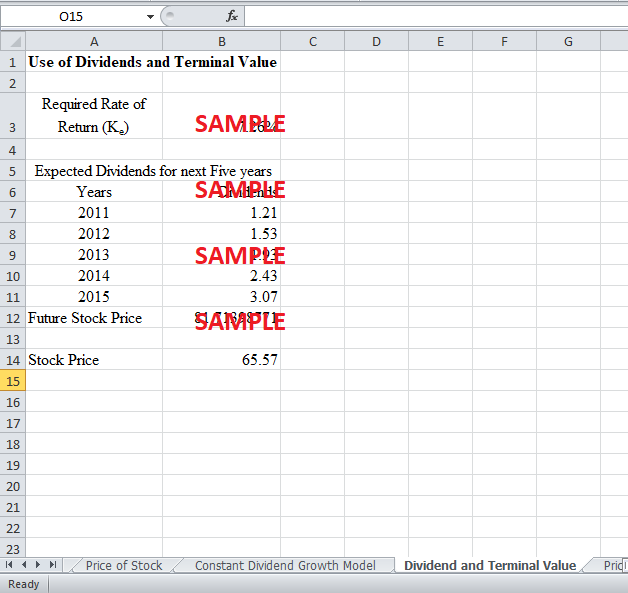 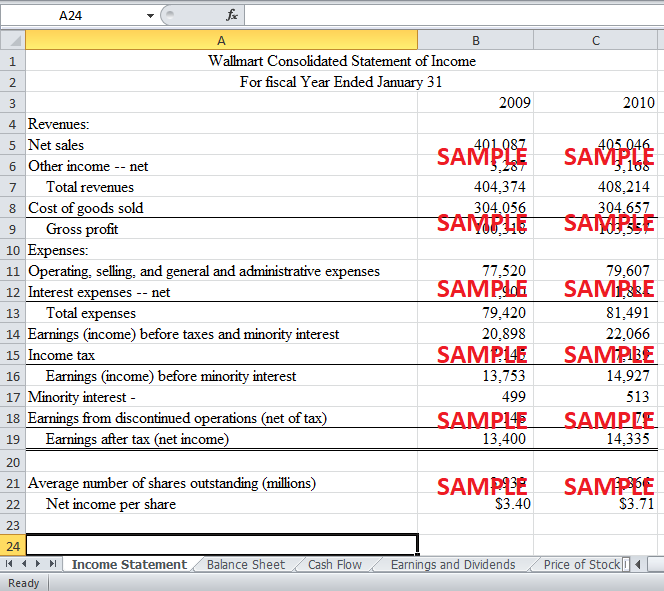 1. As of February 2010, what is your assessment of the worth of Wal-Mart's stock? Utilize all of the methods discussed in the case of value shares.

i. The perpetual growth in dividends

The current value of the stock of Wal-Mart is the discounted value of all future expected dividends at required expected rate of return. The process of forecasting all future expected dividends is not an easy task. In order to facilitate this estimation procedure, constant growth dividend discount model is been used. According to the constant growth dividend discount model, the current price of the stock can be calculated by dividing next year expected dividend (D1) from the resultant obtained by subtracting expected perpetual dividend growth rate (g) from required rate of return (Ke).

ii. Forecasted dividends for the next several years plus sale of the stock in the future

As a substitute to the perpetual dividend growth approach, dividends can be easily calculated for a specific number of years. According to model, it is better forecasting dividends for a number of years at which point a future stock price can be estimated. As the projected earnings growth of earnings is given for five years, dividends are estimated for five years in this assignment and the future price of the stock at the fifth year is calculated. In this model, the price of the stock in some future year is treated as a terminal value, which represents the present value of all future expected dividends. The future price is found out by multiplying P/E ratio with earnings per share at the fifth year in the future. The future earnings are forecasted by using next five years projected earnings growth, i.e. 10.39%, as mentioned in the case. In order to evaluate the stock price, the present value of all five years future dividends along with the present value terminal value is added. Using a new approach, the price of the stock came out to be greater than the actual current stock price, i.e. $65.57. In similar to the previous valuation technique, this result supported the argument that the current price of the stock is undervalued.

Another widely used valuation technique is price/earnings approach. This approach is used to find the price of the stock. The intrinsic value of the stock, using price/earnings approach, is calculated as the projected next year earnings per share times a projected next year P/E ratio. This technique is applied on the fiscal year 2011 data of Wal-Mart. As guided in case, the projected P/E ratio of Wal-Mart, for the year 2011, is 13.4 times, this is lower than the previous year, i.e. 14.7 times. Projected growth rate of earnings is used to forecast the earnings per share in the year 2011. The projected stock price, earning per share time P/E ratio, of the year 2011 is found out to be $55.027, having a present value of $51.30. The calculated results show that the actual price of the stock is overvalued as compare the value estimated using price/earnings approach.

Alternative valuation approach, three stage approach, is a dividend discount model. This model is used in a similar way as it was applied in exhibit 4 of the case. In this model, the future growth in dividends is divided into three periods having different growth rates. This valuation technique is useful when the company’s profits are estimated to rise dramatically and then gradually decline to industry’s average.

First period comprises of growth years, during which company has abnormal gains. In the second period, transition years, the company’s profit decline to the industry average. In the maturity period, the profitability stays at industry average.

In the model used for evaluating Wal-Mart’s stock, the target cost of capital is assumed to be 7.01%. This value is equal to the required rate of return estimated from CAPM model. Moreover, the payout ratio at maturity is assumed to be equal to the last growth year payout ratio. The payout ratio at the fifth year came out to be 40 percent. The model assumes that Wal-Mart will have 5 years of tremendous growth and the transition period comprises of 12 years. The model computed the stock price today by calculating the present value of all cash flows at the cost of equity capital. The result shows that the intrinsic value of stock price is $79.47, which is way above than actual current stock price. The result further showing that the current price is undervalued at the moment.