Vodafone AirTouch is one of the leading telecommunications company in the Europe region. The company has been involved in many collaborative projects with another company – Mannesmann – that has a growing telecommunications division. Following Mannesmann’s announcement to acquire Orange, Vodafone expressed a desire to acquire Mannesmann but the management of the target company rejected the acquisition bid. Vodafone is now contemplating an unprecedented hostile merger of the German company. Vodafone is willing to pay a significant amount of premium to Mannesmann, but the management demands a much higher bid price. The increase in the market price of the two companies implies a high market estimate of the synergies. However, the synergies calculated through the discounted cash flow approach are significantly less than the market’s estimate. The implication is that while Mannesmann’s shareholder might benefit from the deal, the shareholder of Vodafone will suffer. The unfavorable corporate governance system in Germany provides further impediments to the success of a hostile merger. 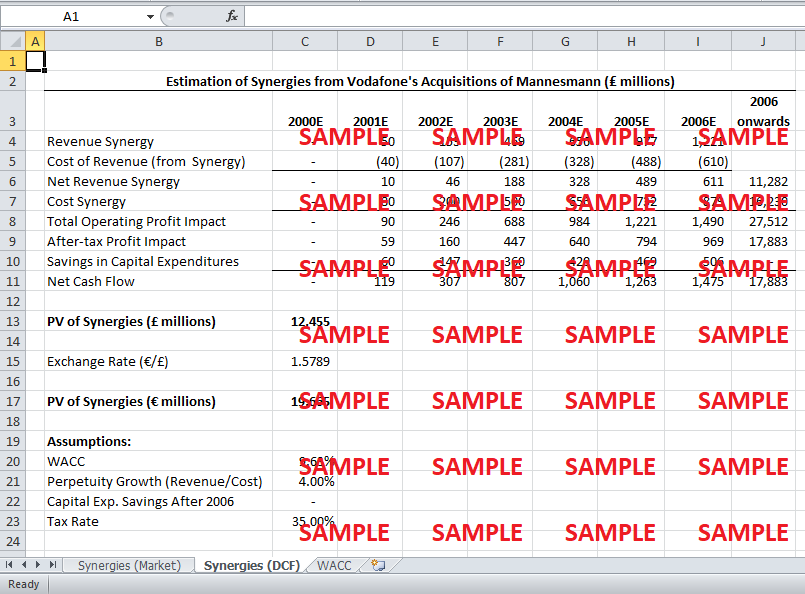 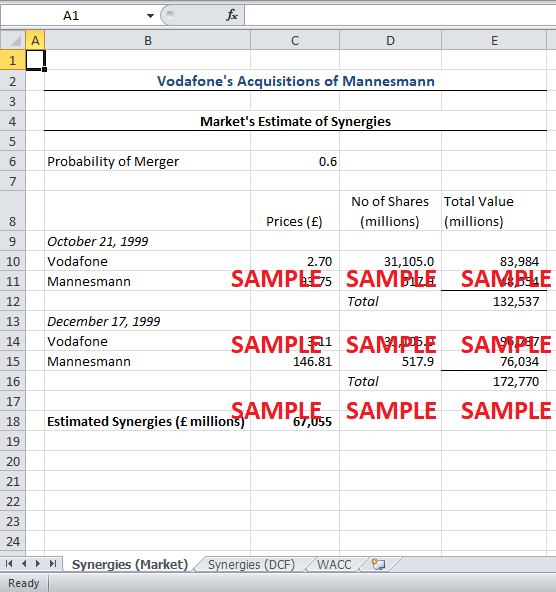 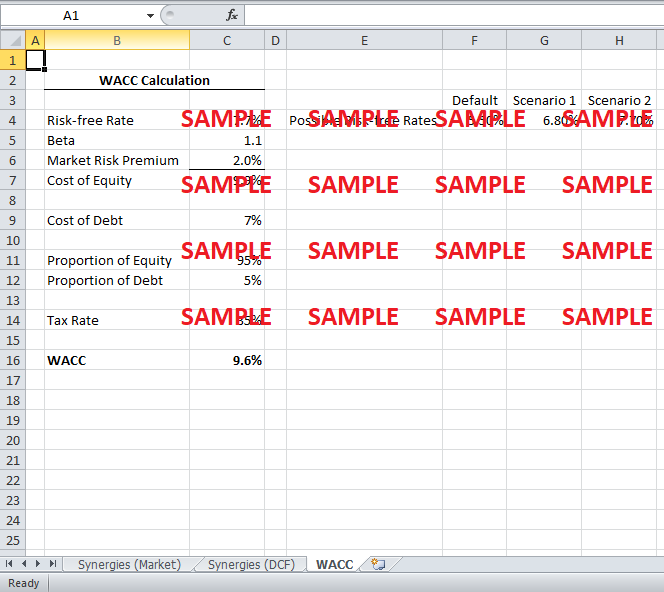 1. What was the strategic and economic rationale for Mannesmann’s acquisition of Orange? Did Mannesmann overpay for Orange?

Orange was the third largest telecom company in the United Kingdom. More importantly, Orange was the only significant company within the UK that was not part of an international telecommunications group. Therefore, Mannesmann saw Orange as a good opportunity to enter the telecom market of United Kingdom. In addition, Orange also held considerable amount of ownership interest in companies operating in other regions such as Austria, Switzerland, and Belgium. Therefore, the acquisition also provided Mannesmann with an opportunity to solidify its presence in these markets. Finally, another important factor in the decision was the aggressive and strong growth experienced by Orange within the UK. The company had the potential to boost the future earning of the overall consolidated company.

b. Suppose the market estimated the probability of Vodafone AirTouch successfully acquiring Mannesmann at around 0.6. On December 17, 1999, based on real sock prices of the two firms, what is the market’s estimate of the implied synergies from the deal? Assume that if the bid fails both firms would trade at prices prevailing on Oct. 21, 1999.

The increase in market prices following the merger announcement can be calculated by comparing the prices on October 21 and December 17. The change in the combined market value of the company from October 21 to December 17 represents the probability-weighted premium estimated by the market. While performing this calculation, it is assumed that no factor within these dates affected the prices of both companies. The market values of the companies can be calculated by multiplying the traded shares prices on the specified date with the total number of equity shares outstanding. These calculations are detailed in the attached spreadsheet. It is found the combined market value of the two companies was £132.5 billion on October 21, before increasing to £172.8 billion on December 17. The implied probability-weighted value of synergies is the difference between the two values. The total value of the synergies can be estimated by dividing this difference in market values with the probability of merger, which has been specified to be 0.6. Thereby, the market estimate of the total value of synergies is approximately £67 billion.

c. What is the present value of the expected synergies (in pounds) as shown in Exhibit 10 as of March 2000? (Refer to the pro forma forecast of synergy in Exhibit 10. Assume: i) synergies related to revenues and costs grow at 4% annually after 2006, ii) savings from capital expenditures do not extend beyond 2006, and iii) the merger does not affect working capital. Use an average exchange rate of €1.5789/£ to convert the estimate of pound synergies into Euros.)

The financial projections for the synergies resulting from the merger have already been included in exhibit 10 of the case study. However, the terminal value of these synergies after 2006 has not been calculated. This terminal value can be calculated using the listed assumptions that the long-term growth rate in revenues and cost savings grow at 4% per year, while savings from capital expenditures do not materialize after 2006. Using this information and the estimate of WACC, the Gordon-growth model can be applied to the projections in 2006 to calculate the terminal value for the years following 2006. These calculations are detailed in the attached spreadsheet. The operating cash flows for each year are also adjusted for the tax rate, which has been assumed to be 35%. The net yearly cash flows, as well as the total terminal cash flow, are discounted at the WACC to calculate the total present value of synergies. Using the outlined discounted cash flow method, the total value of synergies is estimated to be £20.5 billion (or €32.3 billion). This estimate is significantly less than the market estimate of the synergies calculated in the previous section. If the projections are believed to be accurate and the combined company cannot be expected to realize significantly more synergies from other areas, the premium paid for the acquisition of Mannesmann may be too extravagant and the shareholders of Vodafone may suffer a decline in value because of the deal.

The biggest hurdle in the potential acquisition is the management of Mannesmann. After demand a much higher bid, the management is likely to try to convince shareholders to vote against the merger and introduce post-offer defence mechanisms such as seeking a white knight to make a competing bid. The German corporate governance code is also designed to discourage hostile takeovers. Vodafone will need the support of the workers of Mannesmann, who elect half the board members. The workers union has already expressed its opposition to the merger.