FinePrint is a high-quality color brochure printing facility located in Charlottesville, Virginia. The current capacity of the facility is 150000 brochures per month. Johnson is the sole owner and manager of the company. Moreover, he employs one sales representative and one printing press operator. Currently, Johnson is confused about the two options he received. First is to fulfill a special one-time order of 25000 brochures of his friend Jenkins. On the other hand, Johnson has been offered an outsourcing opportunity by SmallPrint, a small printing company located nearby. The analysis revealed that both options if accepted simultaneously will increase the profits of FinePrint by $500. 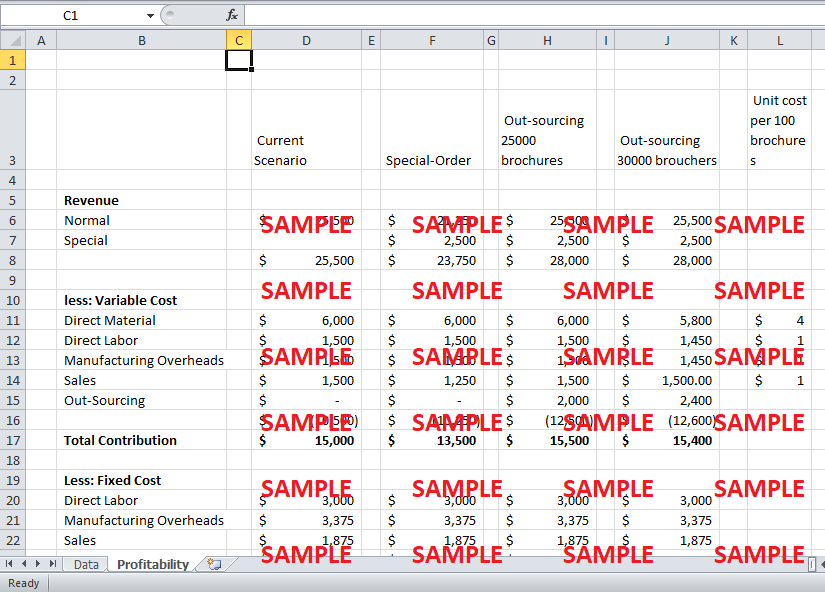 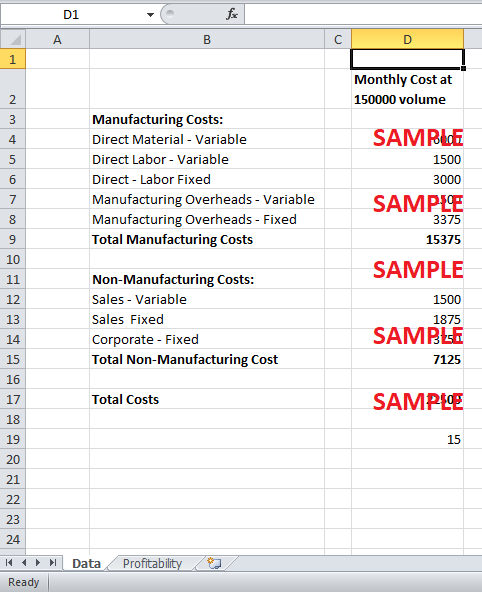 The one-time special order by Abbie Jenkins, Johnson’s friend, has its benefits and costs associated with it. Jenkins offered to print 25000 brochures for promotional purposes at three trade shows. Since Jenkins is currently tight on budget, the selling price per 100 brochures could not be raised more than $10. It reduces the contribution that Johnson currently earns by $7 per 100 brochures. Moreover, Johnson is currently operating under full capacity that means to fulfill the special order; he had to forgo some of his sales that he was previously earning. However, since the special order has been made beforehand, Johnson will have the benefit of saving a number of sales commissions that he spends otherwise. Johnson currently spends $1 per 100 brochures on variable selling expenses i.e. commission paid to sales staff. By taking the special order, he will be able to save $250 (1*(25000/100)) for the next month. Overall, if Johnson agrees on one-time special order, he will be able to save $250 due to savings in sales expenses.

On the other hand, he will lose $1750 due to the sales forgone as the capacity cannot be increased. Thus, the total revenue will fall to $23750 from $25500 whereas the total variable costs will reduce slightly from $10500 to $10250. The total contribution will thus fall from $15000 to $13500. The fixed costs are irrelevant to the total output produced and will then remain constant at $12000. Therefore, the total profits will fall from $3000 to $1500. The quantitative analysis reveals that the special order is not fruitful for FinePrint. Furthermore, this offer did not have any benefits associated in the long-run. Johnson could reduce its profitability now to earn more profits in future, but Jenkins didn’t require any such brochures in future. Moreover, if Johnson fulfills Jenkins’ order, he will have to forgo its current customers due to fixed capacity. It could harm FinePrint in future as Johnson will be losing its customers to its competitors. Therefore, it is not worthy both quantitatively and qualitatively to accept the special order proposed by Jenkins.

In this first option, Johnson will be able to sell 150000 brochures that he was previously selling and also the 25000 brochures to Jenkins. It will increase the total revenue by $2500 ($10*(25000/100)) from $25500 to $28000. Moreover, Johnson will have to spend whatever amount he spends on sales commission previously. It is because, in this option, none of the previous sales is sacrificed to fulfill the special order. However, the new order will still not require additional sales expense on it. The incremental expenses that will be paid to SmallPrint for fulfilling the printing of 25000 brochures will be $2000 (8*250). It will increase the total expenses from $10500 to $12500. The total new contribution will be $15500, $500 more than the current contribution. On the other hand, the fixed expenses will remain same at $12000 in either case. Thus, FinePrint will be able to make a profit of $3500 i.e. $500 more than the current profit. It is exactly due to the low cost provided offered by SmallPrint.

The other option available is to reduce the magnitude of current operations by 5000 brochures and to outsource 30000 brochures to SmallPrint. It will give FinePrint an opportunity to save costs. However, FinePrint will only be able to save variable costs that are already less than what Johnsons had to pay to SmallPrint. Since, the fixed costs will remain as it is. This option will only lead to a profit of $3400. This is $100 less than the previous option discussed.