AES has been using a single discount rate for all of its operations – an equity discount rate of 12% based on US data. This discount rate was quite appropriate in the past when most of the operations were based in US. However, the recent expansion of AES into different geographical areas has exposed the diverse operations of the company to varied amounts of risk. The company is now contemplating the use of different discount rates for each of its projects. It is suggested that the costs of equity and debt are adjusted for sovereign spread – the difference in the riskfree rates of the local country and the US. The WACC is later adjusted for the project-specific risks based on a broad range of seven categories including exchange rates, regulatory environment, and operational complexities. It is determined that the new methodology results in a broad range of discounts rates – ranging from around 10% to 30%. However, the use of different discount rates for projects with varied risk in consistent with the theoretical basis of capital budgeting. The valuation of the Lal Pir project reveals the stark difference between the old and the new method of capital budgeting. Moreover, it is believed that the adjustments of sovereign spread and project-specific risk are consistent with the circumstances of AES. The amount of the adjustments may be disputed but any errors could be best addressed on the basis of empirical data obtained after the implementation of the methodology. AES should, therefore, implement the new approach with a view to improve it even further. 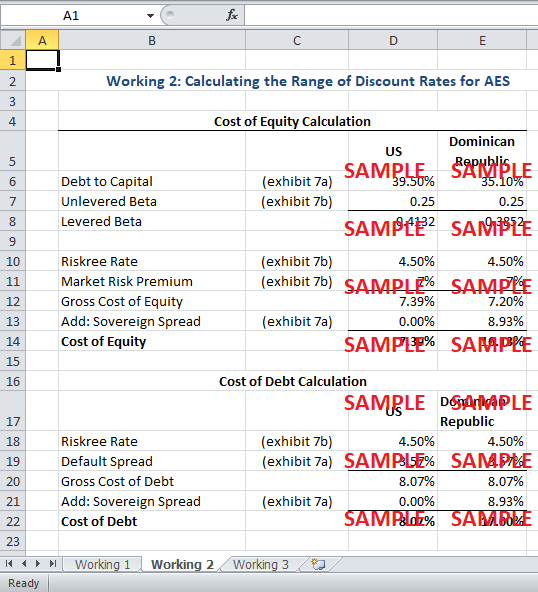 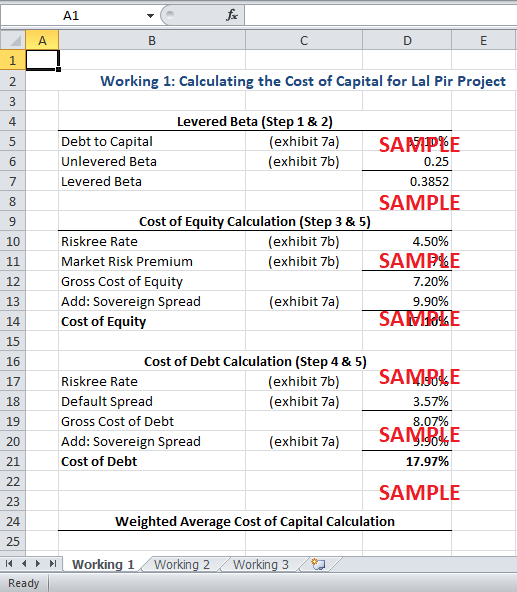 The diverse overseas operations of AES demand appropriate adjustments to the discount rate, but the lack of any theoretical basis for using adjusted discount rates had led the company to use the same discount rates across all of its operations. The company is contemplating a new methodology to calculate separate discount rates for each of its overseas operations. However, the calculations are not an exact science and the results may not be agreeable with other valuations methods like multiples. The planning director, therefore, is not sure if the board of directors will appreciate his novelty or condemn him for overcomplicating things.

Capital budgeting used to be a simple task at AES Corporation. The company used a uniform discount rate for all of its operations. The cash flows were evaluated on the basis of those attributable to equity holder; and, therefore, an equity discount rate of 12% was employed. Majority of the debt of its subsidiary was non-recourse, which was deemed to have no impact on the parent company. The limited recourse debt of the parent company was, thereby, considered good. The justification for the uniform discount rate was that all dividend cash flows to the company were equally risky. This proved to be a gross miscalculation in the end.

Until the 1990s, the use of a single discount rate worked quite well because most of the operations were located in the US, and the limited overseas operations also had very similar risk characteristics when compared to the local operations. During the 90s, the company expanded into many overseas regions. The real problem started when AES began to apply the same discount to these new operations, which had very different risk characteristics. The company had failed to account for the increased currency, political, and sovereign risk of the new operations. During the early 2000s, a number of these additional risks materialized. There were currency devaluations in Latin America, adverse regulatory changes in Brazil, and decline in UK commodity prices. All these events affected the dividend inflows from the overseas operations of AES. This led to a domino effect of the stock price of the company as its market capitalization fell by approximately 95%.

Rob Venerus plans to address the problem by estimating a separate discount rate for each of the company’s projects in order to address their unique risk. Such an approach was not considered in the past because of the lack of any theoretical basis. However, the present crisis has forced the company to reconsider its approach. Venerus has come up with a comprehensive measure of calculating the discount rate that will be used for the total cash flows of the company and not just the equity cash flows. The company realized that the nonrecourse debt can also impact the operations by reducing the dividend flows from the subsidiary. Therefore, Venerus feels weighted average cost of capital is a more appropriate method that also takes leverage into account. Venerus has also developed extensive measures to calculate the country risk as well as project risk faced by each of the company’s operations. However, it cannot be determined with certainty that the new approach will deliver useful results without complicating things too much.

A very similar situation developed at AES. A single discount rate is suitable for companies who have projects with very similar risk. In such cases, the average risk of these projects, as captured in a single discount rate, can be an appropriate measure to use. However, if the risks of projects vary too much, the single discount rate will overestimate risky projects and underestimate attractive projects. Due to its diverse overseas operations, AES undertook projects with very different risks. Still, it used the discount rate that was only appropriate for its lowest risk operations in US. The operations in other countries exhibited other country specific risks, which were not accounted for in the calculations. Therefore, the expected cash flows from overseas operation of AES were over-optimistic. The process of capital budgeting clearly indicates that the discount rates should be modified to reflect the riskiness of the specific projects. The fact that AES could not find an empirical proven way to modify their discount rates does not its decision to continue using the wrong discount rate. The company is right to modify the discount rate to reflect the riskiness of each of its project. The question is: is the current approach taken by AES appropriate?

2. The Adjustments to Discount Rate

i. Cost of Capital

The new approach for calculating the discount rate for AES is comprised of five steps. These steps are outlined in exhibit 8 of the case study. The first step is to calculate the unlevered beta for each of the projects. The unlevered betas adjust the effect of leverage. The second step is to re-lever the betas at the appropriate capital structure for each project. The betas need to be adjusted because each project has different levels of debt. The company uses a simple approach of taking the unlevered beta and dividing it by the weight of equity. A more complicated and appropriate technique would use the Hamada’s equation to account for the differences in marginal tax rates as well. The third step calculates the cost of equity using the Capital Asset Pricing Model (CAPM). The relevant data to employ CAPM is provided in exhibit 7b. The fourth step is to calculate the cost of debt using the bond-yield plus risk premium approach. These four steps are very standard when it comes to calculate the weighted average cost of capital (WACC). Any company that employs WACC in its capital budgeting may be using these steps. However, it is the final step of the process that brings the innovation into the process.

AES has devised seven different categories of business-specific risk. They have scored each of their businesses on a scale of one to three. The weighted average score on these seven factors will be multiplied by a factor of 500 basis points to arrive at a business specific risk. This risk will be added to the total WACC calculated for each project. The factors covered range from exchange rate risk to operational complexities. The seven different aspects of the risks appear to be carefully thought out.