This report analyzes the feasibility analysis of Gourmet Gadgets for producing and marketing a new invention, pasta server. Gourmet Gadget Inc. is a startup that seeks a venture capitalist for additional funding to start its operations. We have constructed a complete master budgeting system for the company, starting from sales budget to projected balance sheet. We have found that the company will need $85,000 for smooth functioning including expansion of production facility. Based on the above mentioned figures and an analysis of the master budget, we suggest that the company should go for 50% ownership stake and receive $75,000 from Mr. Cohen. By the tenth month i.e. May 1990, however, they will need cash of $8,663 to fund the purchase of two-cavity production mould. Nevertheless, the decrease in production costs due to the new mould increases the profitability as well as cash position of the company. 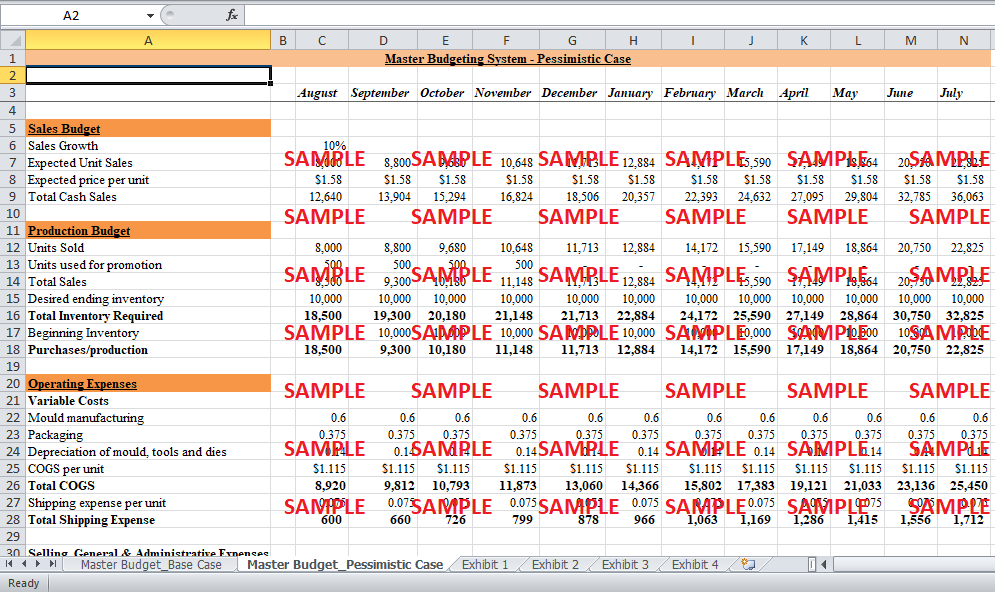 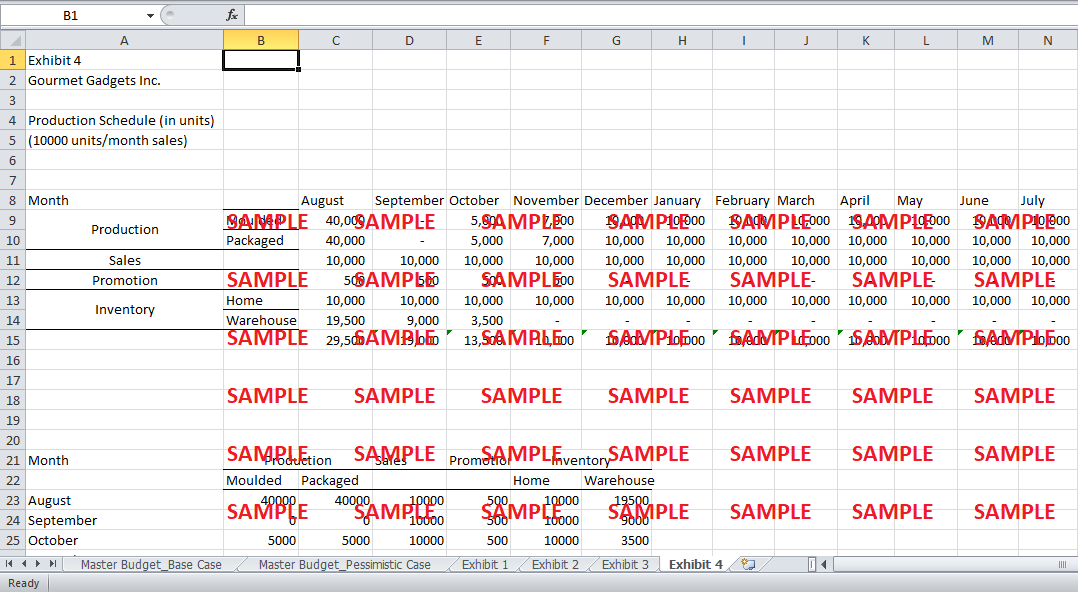 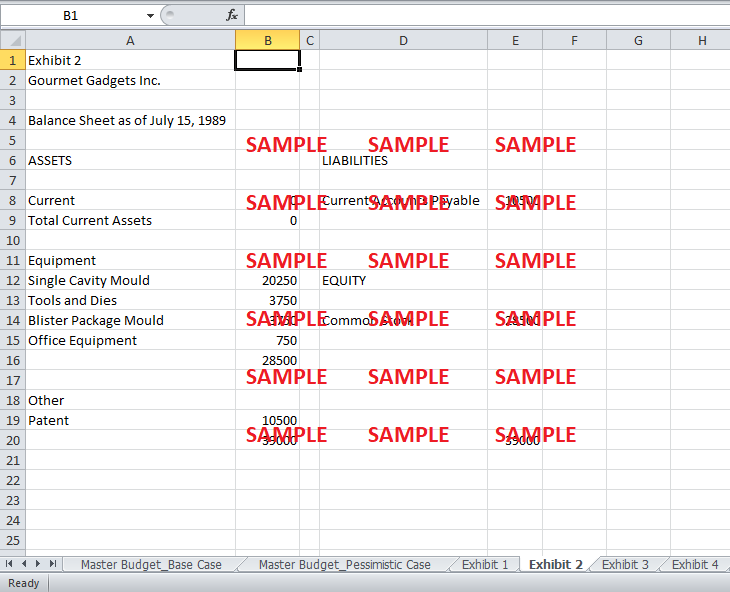 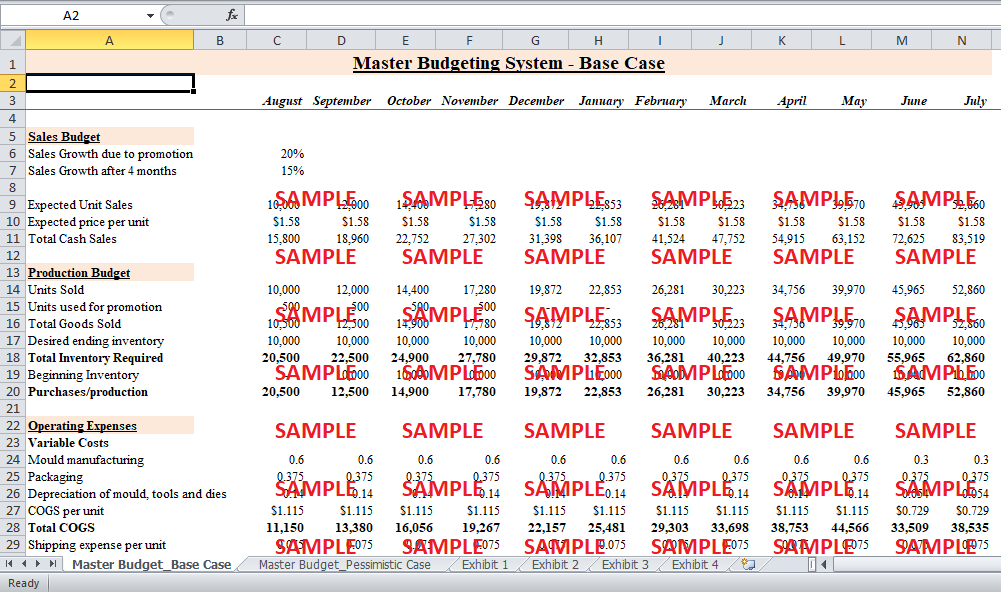 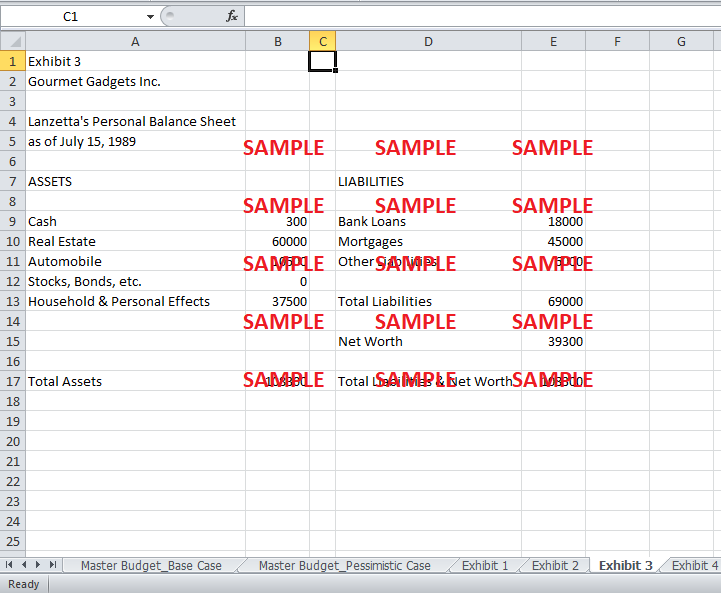 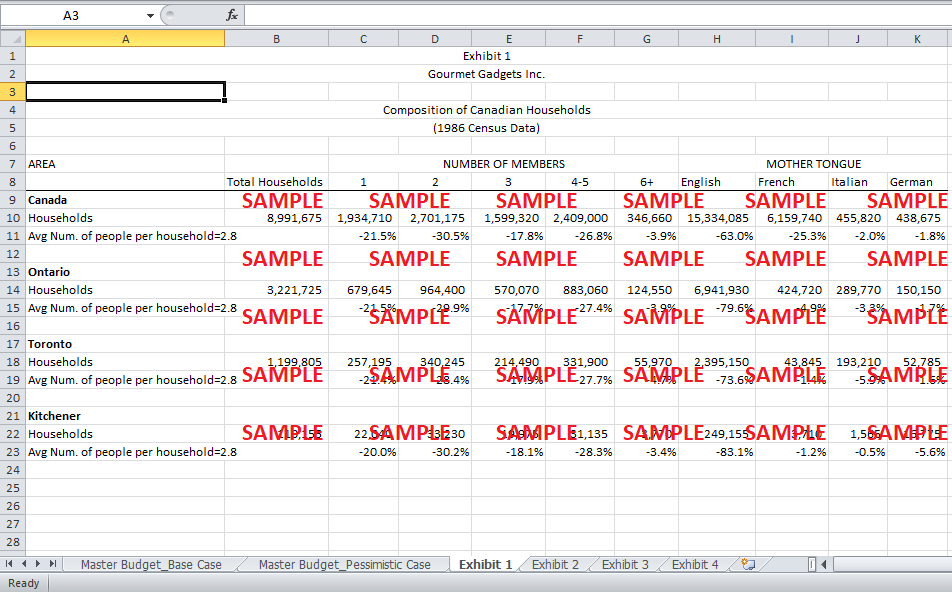 Jointly owned by Ken and Mary Lanzetta, Gourmet Gadgets Inc. was founded in May 1989 to design, develop, manufacture and market the unique household utensil. The Lanzettas have already patented their invention in Canada and United States. They have also applied for patent registration in Europe. Initially, Gourmet Gadgets plans to market its products in Canada, with expansion plans for US, and Europe after the registration of patent.

The Lanzettas have already financed long term assets and patent through personal loans, however, they need additional funding in order to kick start production and pay the dues on production mould. They are unable to get any further debt from bank, hence, they decided to seek venture capitalists. Mr. Arthur Cohen, a venture capitalist, has proposed to finance a maximum of $75,000 for 50% ownership stake in the company. Moreover, for an ownership stake less than 50%, his cash investment will be disproportionately lower. To analyze the feasibility of the plan and amount of cash needed, we have built a complete master budget for Gourmet Gadgets Inc. for the first financial year.

The master budget for Gourmet Gadgets consists of following components in order:

We have omitted the statement of cash flows and cash budget serves the purpose of analyzing cash flows. In the following headings, all the relevant assumptions as well as calculations involved for each component of the “base case” have been explained one-by-one below.

Ken Lanzetta has projected sales of 10,000 units per month with 5,000 and 30,000 units being pessimistic and optimistic projections. We have assumed initial sales of 10,000 units in the first month, however, we expect that sales will increase at a rate of 20% for the first four months due to promotional activities conducted by Gourmet Gadgets. After that, the sales will grow at a constant rate of 15%. The projected sales have been presented in exhibit 1.

The monthly variable costs include $0.6 for manufacturing costs, $0.375 for packaging and $0.14 for depreciation of moulds and tools which add up to $1.115 of COGS per unit. In addition to this, $0.075 of shipping cost per unit is incurred at the time of sale. Multiplying these by the number of units sold gives the monthly variable costs. Furthermore, selling, general and administrative costs include 500 units at cost for promotion, $10 depreciation for office expenses and monthly administrative expenses of $3,750. It is important to note that the production cost decreases to $0.3 while depreciation increases to $0.054 if the double-cavity mould is in operation i.e. in after June, 1990. See exhibit 3.

Based on Ken’s strategy, we have assumed that if sales rise above 30,000 units for the consecutive two months, two-cavity mould would have to be purchased. As shown in exhibit 3, the two-cavity mould is to be ordered in March 1990 and will be operational after three months i.e. in June 1990.

The budgeted income statement is based on the amounts detailed in sales and production budget. The income statement uses the sales price of $1.58 which Gourmet Gadgets receives from the distributers within two months. Moreover, a tax rate of 20% has been used where negative taxes represent tax savings. Exhibit 4 shows that the company realizes profits starting from the second month.

The most important component for this analysis is the cash budget. Gourmet Gadgets receives 50% of cash for its sales the next month while the remaining 50% in the second month after the sales are made. Contrary to that, Gourmet Gadgets makes all its payments to producers and packagers in the same month as production. Moreover, the company makes other payments such as administrative and shipping expenses in the same month. The payment of two-cavity mould is made in three installments following the month of order. The cash budget shows that with funding of $75,000 from Mr. Cohen, the company will have negative cash position in the month of May owing to the purchase of two cavity mould. However, the new mould reduces production costs to half which stabilizes the company the next month. See exhibit 5.

As shown in exhibit 6, the only difference in balance sheet on the asset side is the accumulated depreciation in long term assets and capitalization of two-cavity production mould. Moreover in current assets, the amount of cash is the ending balance from the cash budget while inventory is the ending inventory of 10,000 units valuated at the cost per unit from operating expense budget. Account receivable constitutes sales of this month), plus balance of previous month less cash receipts of this month. Accounts payable constitutes the payments due for the new production mould. The equity capital invested by Arthur Cohen is $75,000. Finally, retained earnings is the sum of previous month’s retained earnings and net income of this month.

The master budget for the base case shows good prospects for the company with the proposed financial structure. Based on the above mentioned figures and an analysis of the master budget (and the pessimistic case in excel file), we suggest that the company should go for the 50% ownership stake and receive $75,000 from Mr. Cohen. Although the cash position of the company becomes negative in the tenth month i.e. May 1990, however, the reduction in production costs due to the new mould drastically increases the profitability as well as cash position of the company.