This case discusses Cross-Border valuation of projects. This kind of analysis is common for companies that are operating in many countries. Groupe Ariel is one such company that is considering investing in a project in its own subsidiary in Mexico. The company manufactures and sells printers, copiers and other document production equipment in many countries. As far as, expansion into new markets is concerned, company is very slow in taking initiatives as compared to its competitors owing to the recent recession. But the management of the company believes that better durability and lower after-sales service costs of their products enable the company to build customer loyalty. The company is now considering replacing the manual equipment used for recycling in Mexico by new equipment that requires less material and labour costs. But, the uncertainty linked with certain macroeconomic factors like exchange rate, inflation and interest rate has made the valuation of the project very complex. 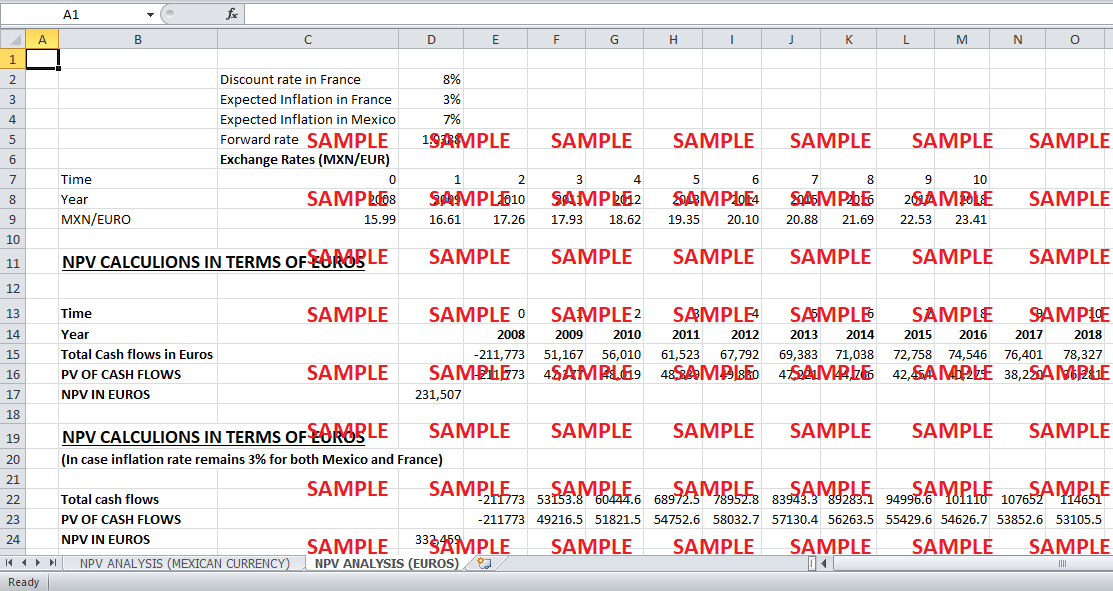 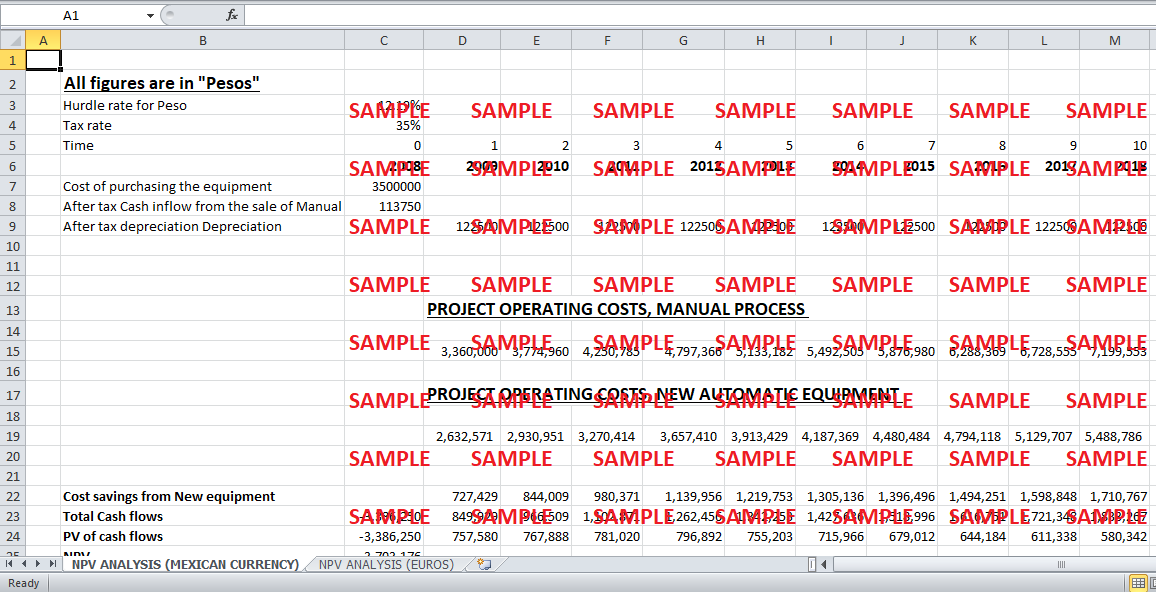 1. Compute the NPV of Ariel-Mexico’s recycling equipment by counting incremental peso cash flows at a peso interest rate. How should this NPV be translated into Euros? Assume expected future inflation for France is 3% per year.

For the purpose of calculating NPV in Pesos, incremental cash flows of the project for the next 10 years should be calculated first. The initial outflow of cash flow at time “0” is the cost of new equipment. This cost is 3500,000 Pesos. The cash value of 175,000 Pesos obtained by selling the manual equipment should be subtracted from this amount to come up with the net out flow. As far as, the inflows of cash for next 10 years are concerned, they can be calculated by taking the difference of the cost of operating both manual and new equipments. The tax savings owing to the depreciation of the new equipment can be calculated by multiplying the corporate tax rate of 35% with the amount of depreciation each year. These amounts of tax savings should be added to the incremental cost savings for each year to come up with the total cash inflows. The present value of all these cash inflows and outflows can be calculated by discounting them at 12.19%. This rate is calculated by assuming that the purchasing power parity holds in this scenario. The company can do the feasibility analysis by looking at both from the subsidiary’s and parent’s perspective by assuming that the purchasing power parity holds. Hence, this rate can be regarded as opportunity cost of investment because it is the second best alternative for the company for investment purposes.

2. Compute the NPV in €s by translating future peso cash flows into €s at expected future spot rates. Note Ariel’s € hurdle rate for this asset class was 8%. Annual inflation rates are expected to be 7% in Mexico and 3% in France.

NPV calculated for this scenario comes out to be 231,507 Euros. The first thing required for calculating NPV in Euro is the forward premium. It is calculated by adding 1 to the inflation rates of France and Mexico respectively, and then by taking their ratio. This ratio comes out to be 1.0388. This ratio is then multiplied by current exchange rate of 15.99 MXN/EURO for every year. This exercise gives the prediction of exchange rates for next 10 years. The cash flows in pesos are then converted into Euros by dividing them by the relevant exchange rate. Once the cash flows are obtained in Euros, their present values can be calculated by using the hurdle rate of 8% as the discount rate. NPV can then be obtained by taking the sum of present values of all the cash flows.

3. Compare the two sets of calculations and the corresponding NPVs. How and why do they differ? Which approach should Arno Martin use? Relate your answer to the textbook’s treatment of parity disequilibria in capital budgeting.

NPV calculated for the first question is higher than that calculated for the second question. The difference (231593-231507) is 86 Euros. This difference explains that the project has more value for investors in Mexico. The value addition of this project is more to the subsidiary of the company in Mexico as compared to the parent company in France. Hence, the company should hedge the foreign exchange risk to reduce exposure to the currency risk. Hedging provides the company with higher expected value and lower risk.

4. Suppose Mexican inflation is projected at 3% instead of 7% per year. Assume French inflation remains at 3%. How does this affect the NPV calculations?

5. Suppose Ariel expects a significant real depreciation of the peso against the Euro. How should Martin incorporate this expectation into his NPV analysis? For simplicity, assume inflation is expected to be 3% in each country. What is its effect on NPV under each of the approaches in questions 1 and 2?

This expectation of a real depreciation of Peso against Euro is essentially an exchange risk. Real depreciation of Peso against Euro means a greater exchange rate. Hence, this aspect can be incorporated in our analysis by increasing the exchange rate for every year that reflects the real depreciation in value of Peso. This change will not have any effect on the NPV calculated in Pesos. However, since the cash flows for NPV calculation in Euros are obtained by dividing the cash flows in pesos with the exchange rate, their value in Euros will be lower. Therefore, NPV of these cash inflows and outflows should be less.

Besides real depreciation in the exchange rate, there are many other ways in which parity conditions can be violated. Any sort of risk that is unique and effects businesses more in one country than another leads to the violation of parity conditions. Risks like political risk and exchange risk may lead to the violation of law of one price. These risks emerge from changes in government policies related to tariffs, quotas, trade agreements and inflation.