Socal, a renowned oil and gas company, is trying to bid for a possible acquisition of the prominent ‘Gulf oil corporation’. However, the requested share price is 62% higher than the prevalent market price. Meanwhile, considering it to be a valuable acquisition, many companies are willing to pay a higher amount for Gulf 165 million shares. Calculations show that the WACC for Socal and Gulf comes out to be 17.59% and 15.03% respectively. Cash flow analysis shows that Socal can afford to pay a maximum of $86.24 per share. Any amount higher than this would be detrimental to Socal’s shareholders. From the perspective of Gulf, the maximum bid should stand at $92.76. However, at this amount, Socal is at a loss. Therefore, a good strategy would constitute bidding a little low than $86.24. As companies are willing to pay till $75, Socal should place its bid at $80 per share. Socal should also place a ceiling at $86.24. 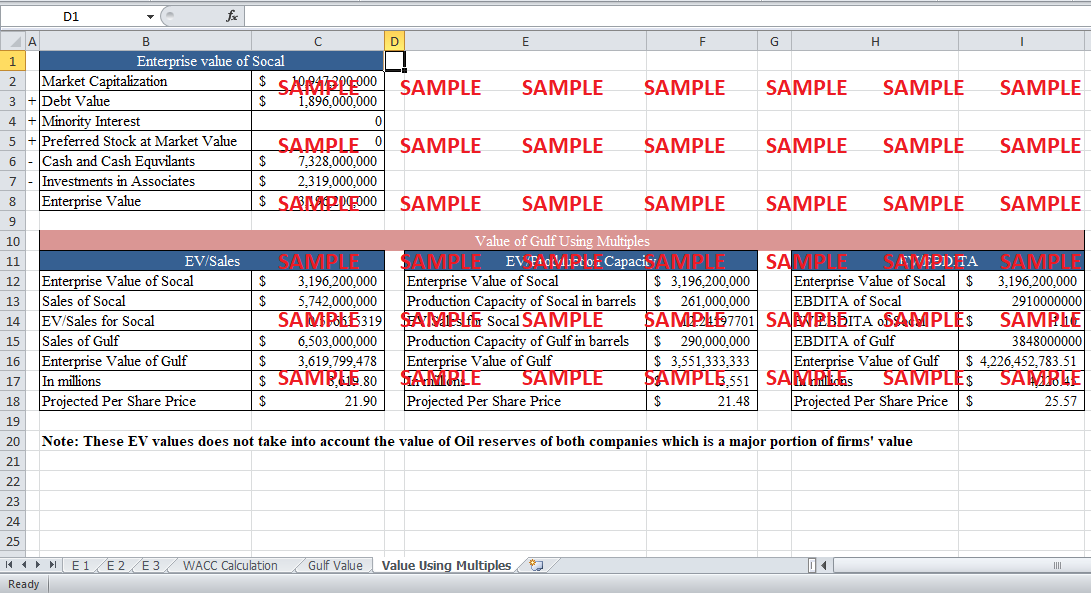 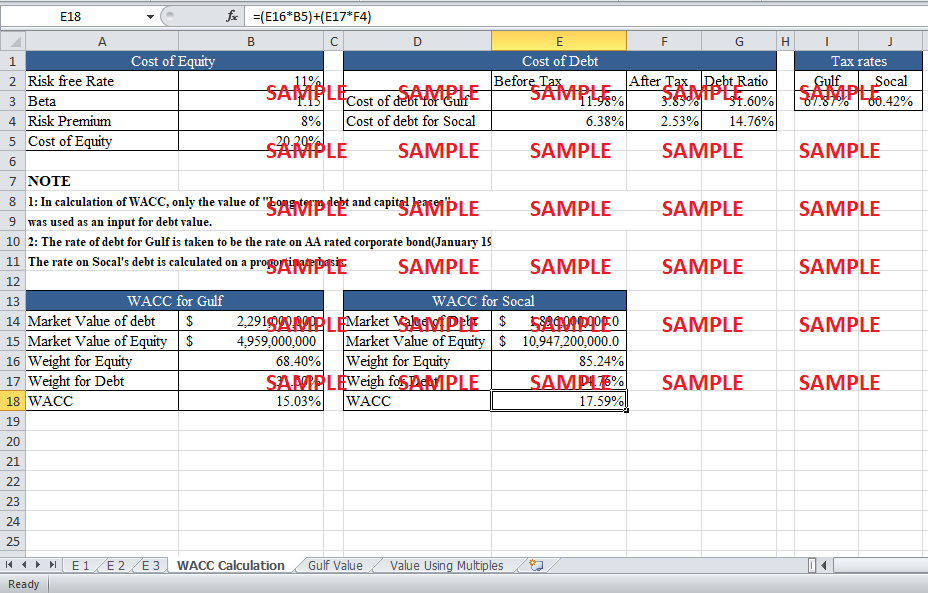 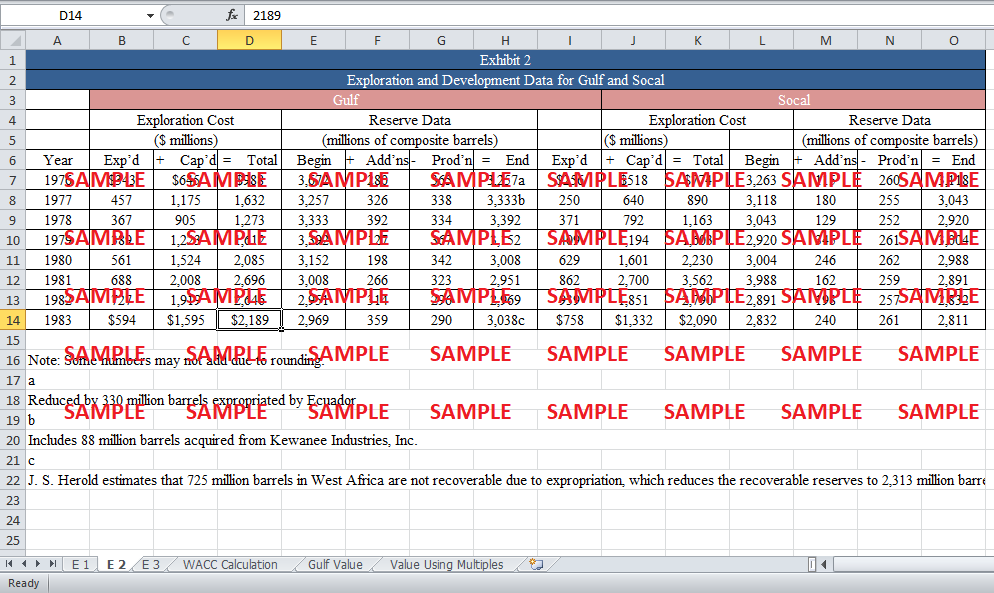 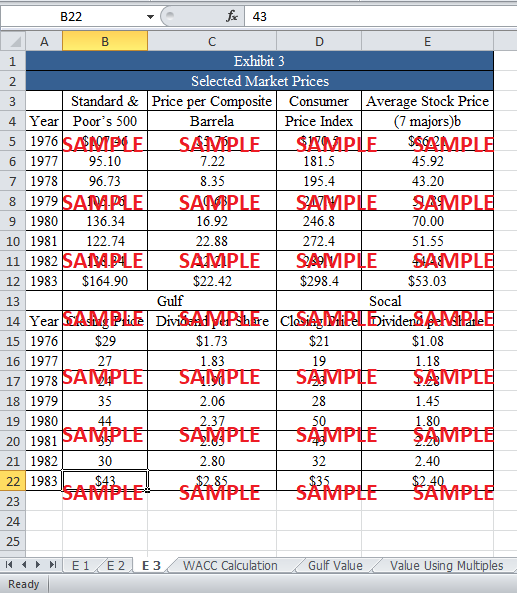 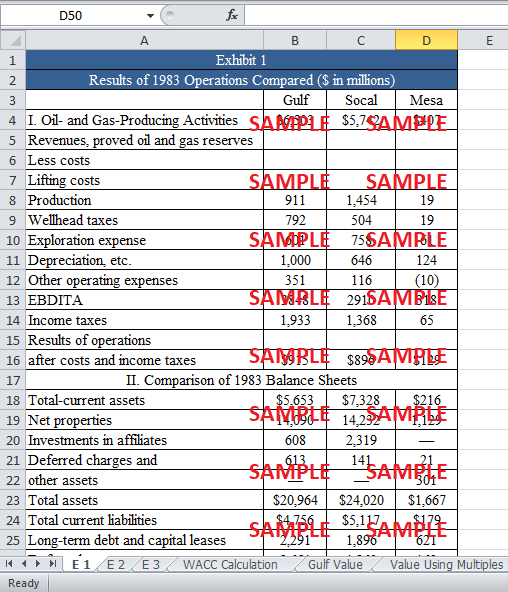 1. What are reasonable multiples for comparing the relative values of Socal and Gulf?

Both the firms are almost equal in the operating size. In terms of total asset size, Socal is 20% larger than Gulf. This difference arises because Socal’s current assets and affiliate investment are a little high in comparison with that of Gulf. At the same time, it should also be noticed that, in terms of revenue generation, both firms are at an equal level if one takes into account the dollar revenues coming in. The production costs, on the other hand, are higher for Socal and so is the depreciation. In terms of barrels production, both firms almost stand at an equal level with Gulf standing first by a minor difference of 9%. The formula to calculate enterprise value of the gulf is shown below.

Keeping into consideration the described facts, the following valuation multiples can be appropriate and realistic.

In spite of the fact that the sales are never considered being the firm’s value driver, this multiple will be appropriate as both firms have sales cycles that are highly cyclical. At the same time, the sales figure do represents the relative market share of the company. Meanwhile, in the case of oil and gas industry, market share may be a good driver of firm’s value. By taking Socal as a benchmark, the value of gulf comes out to be $3620 million.

The best and the most appropriate multiple that can be used to measure the value of both firms are the ‘EV/EBDITA’ multiples. Again by taking Socal as a benchmark, the gulf’s enterprise value comes out to be $4226 million.

2. What is the maximum price Socal can afford to pay for Gulf?

Before moving forward to the advanced calculations, this it is to be reiterated that the formula, which is used in the calculation of the share price, is as follows:

However, the enterprise/firm value can be calculated by using the WACC of either of companies. In this case, as Socal is looking for a share price that will minimize its shareholder’s loss; therefore, socal’s weighted average cost of capital will be used.

The cost of equity for Socal can easily be determined. The risk free rate is equal to the YTM of riskless government bond. Hence, it comes out to be 11%. Beta of Socal can be calculated by two methods. Firstly, the beta of Socal is explicitly mentioned being 1.15. On the other hand, the beta can also be calculated by utilizing the holding period return for Socal’s and S&P 500 share and then running the regression. As the data is provided on an annual basis and additionally the number of years is not that significant for plotting a regression line; thus, the provided beta will be a preferred. At the same time, 8% risk premium is used in the calculations. The cost of equity for Socal comes out to be 20.2%. The cost of debt for Socal can be calculated by taking into account the AA corporate bond yield rates of year 1983. The before tax debt rate comes out to be 6.38%. The tax rate for Socal can be calculated by utilizing the data from the previous year balance sheet. To arrive at the tax rate, the income tax for the year is divided by the income before tax. The resulting tax figure is 60.42%. Therefore, the after tax rate of debt is 2.53%.

For the purpose of calculating WACC, the debt value is taken to be value of ‘long-term debt and capital leases’. The equity value is computed by estimating the current market capitalization. However, in order to maintain the reliability of calculation, the pre acquisition stock price of Socal is used. The debt to equity value comes out to be 85.14%/14.76%. Therefore, the WACC comes out to be 17.59%.

By taking the NPV of cash flows using Socal’s WACC, Gulf’s value comes out as $10373 million. The value of the firm as a going concern is simply equal to the product of its share price and number of shares. To avoid biases, the ‘pre acquisition offer’ share price of $30 is used. The going concern value stands at $4959 millions. The computed per share price comes out as $86.24. This is the maximum Socal can pay to the gulf because going upwards will leave socal’s shareholders at a loss.

3. What changes in Gulf’s operations are needed to justify the above price? What is the value of the changes you propose?

The above mentioned value of Gulf is calculated on going concern basis and the fact that Socal will dispose of the net properties of Gulf at the end of 1991. If, after the acquisition, Socal does not operate gulf on a going concern basis, there is quite a possibility that the share price of Gulf can fall to half of its original price. The current per share bid/offer price without going concern is equal to $56.24. The value generated by going concern assumption is, therefore, $30 per share. At the same time, as the cash flows are calculated on the assumption that no ‘further’ exploration will be carried out, and that exploration cost is constant at 1983 level.  Hence, the only cost incurred will be the cost to exhaust the reserves. This cost is equal to the cost incurred in production and depreciation expense. The use of debt in the acquisition can be helpful for the company as it will force the management to perform better than before. Socal should also stop the exploration of new oil reserves. At the same time, the best way to align the management’s vision with the idea of liquidation is to incentivize management in such a way that the share price remains steady.