Lehigh Steel, a specialty steel manufacturer for high use applications, enjoyed a premium market position. The firm provided superior quality resulted in its financial performance outperforming the entire industry. However, in 1991 the firm reported high losses due to the recessionary trend of the market. Hence, it was important for the firm to determine a new product mix. Furthermore, Lehigh Steel had been following a standard cost method for accounting purposes. Jack Clark, Lehigh Steel’s CFO believed that activity based costing should be used for cost accounting. However, Mark Edwards, Director Operations thought that the implementation of theory of constraints accounting was more preferable. Therefore, an evaluation of various costing alternatives is required to determine the best alternative to be implemented and, accordingly, the optimum product mix for Lehigh steel. 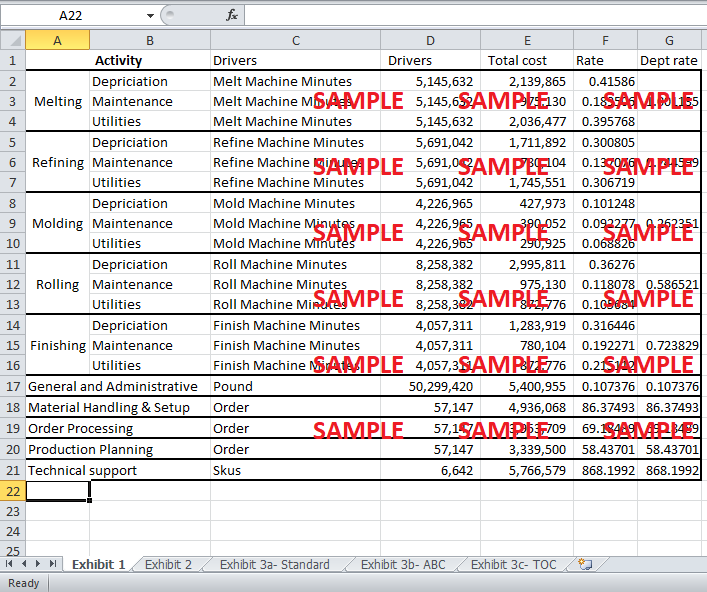 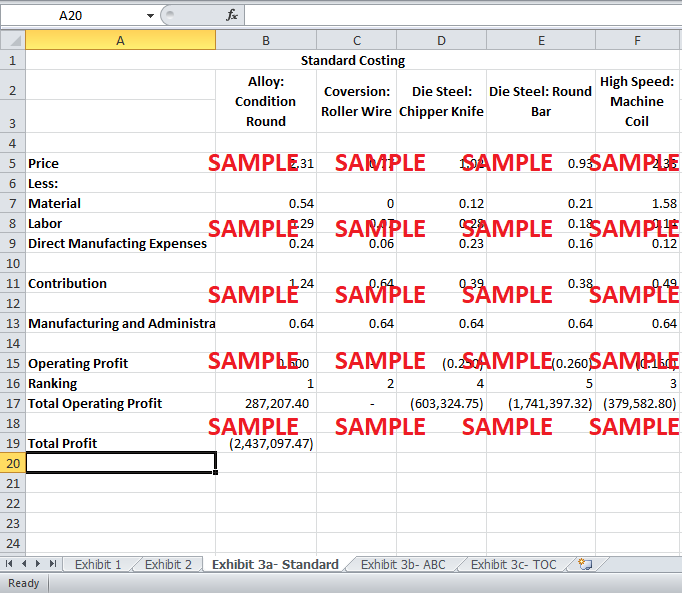 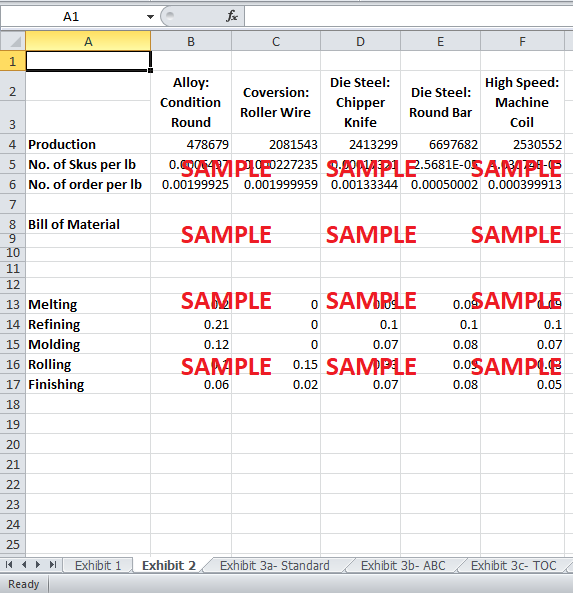 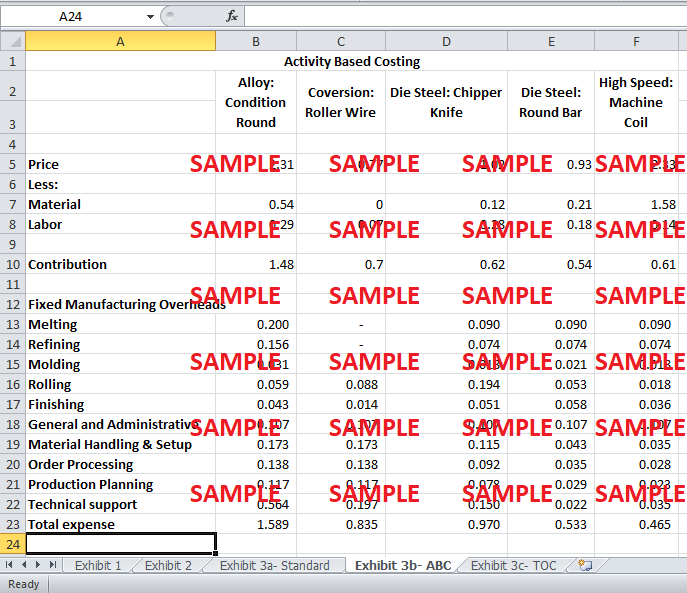 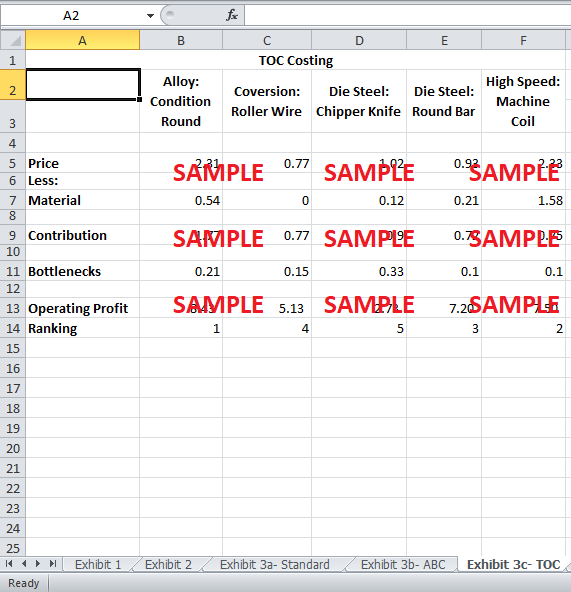 1. Using the information in Exhibit 4, 5 and 6, do a revised operating profit work up (like Exhibit 5) on an ABC Basis.

Using the cost drivers and total costs of depreciation, maintenance and utility of each department in Exhibit 4, the absorption rate for each of the department was calculated (Exhibit 1). Price, material cost, labor cost and direct manufacturing cost per pound were the same as those used in standard costing. However, the fixed manufacturing and administrative overheads were calculated on ABC basis. In ABC costing, the machine hours per pound used by each department or expense were multiplied with the relevant absorption rate to allocate costs.

Hence, using ABC costing, it was evaluated that the operating loss was $763,666. It also showed that the only profitable product for the company in 1992 was High speed Machine coil which generated a profit of $64, 112.

2. Based on the current production levels, costs and revenues determine the priorities of the five products (or processes) should have for allocating CRM capacity, using the following cost concepts; Full standard cost, Full ABC cost, Extreme TOC cost and any other cost concepts that you believe are appropriate.

Exhibit 3 shows the determination of the priorities for the five products using standard costing, ABC costing and TOC costing.

Lehigh Steel had been using standard costing methods to determine profits like the entire steel industry. The calculations in Exhibit 3a show that according to this costing method the operating profits are directly related to prices, costs and volume. Hence, product weight in pounds is taken as a cost driver to determine various costs. There are four main costs. Materials, labor and direct manufacturing expense are the variable costs. The fixed costs are manufacturing and administrative overheads. Therefore, the operating loss in 1991 turned out to be $2,437,097. Furthermore, the calculations show that, for Lehigh Steel, Alloys generated a profit of $287,207 and was the most profitable product. Hence, if the company had been using this costing method they would be promoting this product extensively. After Alloys, Conversion has second priority, high speed third and die steel fourth and fifth priority. Nevertheless, the record loss in 1991 shows that the strategy was not accurate for the firm and neither was the costing technique.

Jack Clark was the CFO of Lehigh Steel. He proposed an alternative costing method known as activity based costing (ABC). ABC is implemented in two stages. Exhibit 1 shows the first stage where the processes (with their expenses) are identified together with their cost drivers. The total expenditure on each expense is divided by the relevant cost drivers to determine the absorption rates. Exhibit 3b shows the second stage in which the rates are used to allocate the cost of activities to the five products. For ABC costing, the variable costs were the direct material and labor costs and all the other manufacturing and administrative costs were derived using the rates and the cost drivers.  In order to find the correct product mix to maintain profitability even in recessionary periods, he decided to implement Activity Based Costing in the company. The result for ABC costing is very different from that of Standard costs. High Speed Machine coil is the most profitable on the ABC basis generating profit of $367, 778. Die steel Round Bar is also profitable at $47, 427. Other products show a loss. Alloy has the third priority, Conversion the fourth and Chipper knife the fifth. Hence, according the ABC, Leigh Steel should include only High Speed and Die Steel in its product mix.

Mark Edwards, Director Operations believed in the implementation of theory of constraints method of determining priority. This theory argues that the business should establish priorities based only on the constraints as; in the short run, the production is limited to the constraint. Hence, the profit from the entire system can be increased if the throughput of the constraint is increase. Exhibit 3c shows the determination of priority using the TOC method. The constraint for Lehigh Steel is the capacity of the mill in terms of machine hours. Hence, first contribution per pound is determined by subtracting the material cost from the price. The bottle neck for each product is the longest time taken for the product in any of the five processes. The contribution is divided by the bottle neck machine hours to give the contribution per pound per machine hour. According to this figure, Alloys have the first priority and high speed has the second priority.

An alternative Strategy for Lehigh Steel would be to use both ABC and TOC while deciding the optimum product mix. This method would be suitable as it will take account of both the bottlenecks while deciding product mix and the cost drivers when allocating the fixed cost. This will lead to maximize profits.

3. Calculate the apparent change in profits Lehigh would experience by shifting production capacity from lowest to the highest priority product for each of the above.

For ABC method, the direct manufacturing cost is not included in the contribution. All the manufacturing and administrative (M&A) costs are determined by cost drivers. Hence, as High Speed has the lowest M&A cost it also has the highest operating profits.

For TOC, the operating profit will depend on whether the standard costing is used for cost allocating of ABC costing. Under standard costing, Alloy will be the most profitable product due to its highest contribution. Under ABC costing, High Speed will show the highest income as it has the lowest M&A cost. The overall profit will change based on allocation of fixed cost.

4. Explain why the method of setting one set of priorities is superior to the others.

The ABC Method of setting priorities is superior to the Standard cost and TOC Method. This is because the standard cost method only takes account of contribution per pound to determine the priorities. Similarly, the TOC method uses the opportunity cost of utilizing the bottlenecks derived from the contribution to determine the mix. However, the ABC method uses the contribution per pound as well as the allocated fixed costs based on the drivers to come up with a set of priorities.