Lot sizing policy is a very important decision for inventory management. It could have a significant impact on the company’s performance. In a given situation, Sunita Menon, new personnel to inventory management has to propose a lot-sizing policy to her operations manager. Different possible policies could be a lot for lot technique, economic order quantity model, least total cost model, and lowest unit cost model. In order to analyze these policies, she had to segregate the costs which could be controlled using the lot-sizing policy. Since the cost of raw materials remains the same irrespective of lot sizes or quantity of production, they should be kept on the side from this analysis. Sunita had to calculate carrying costs and set up costs under different methods and then had to compare these numbers. Then she had to select a lot-sizing policy that would to formula the MRP matrix. 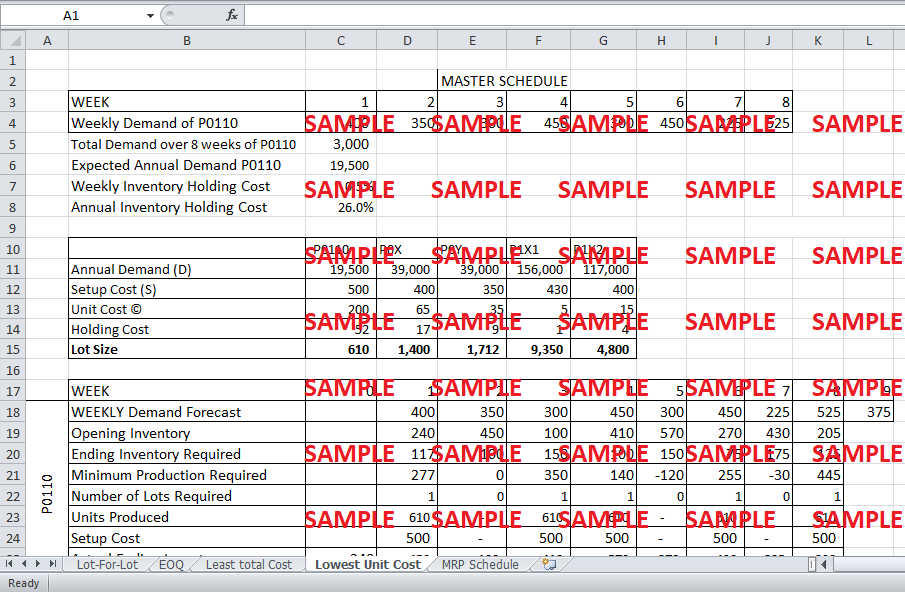 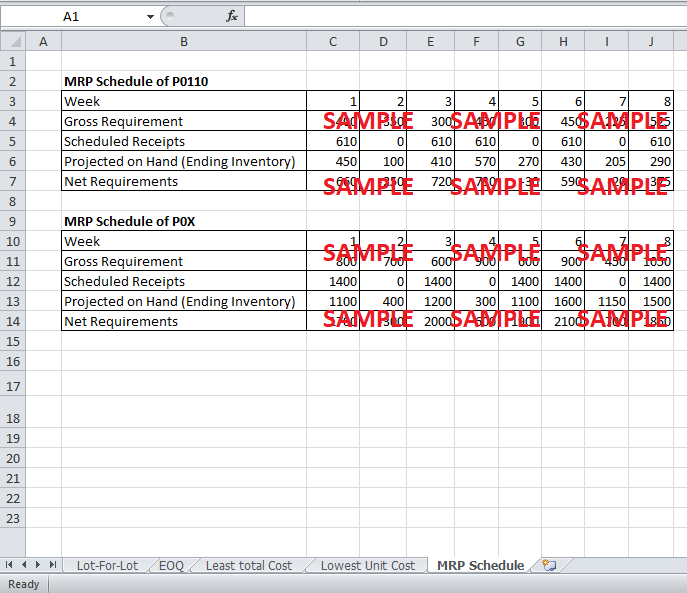 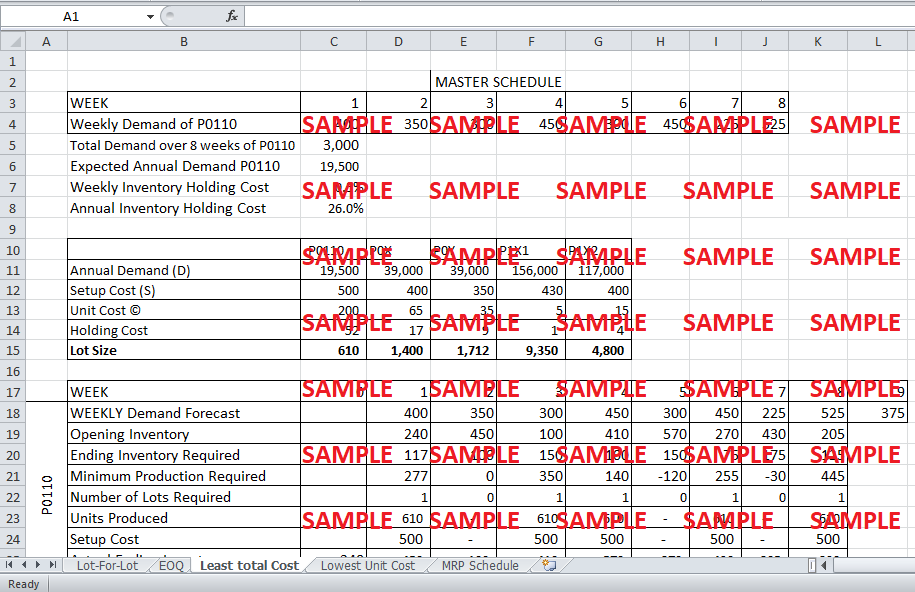 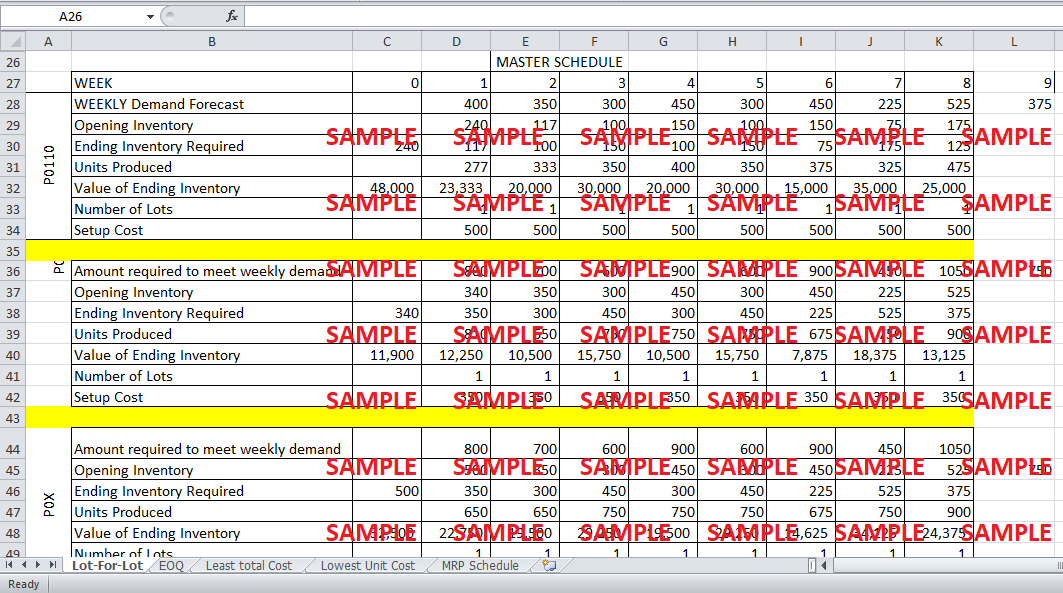 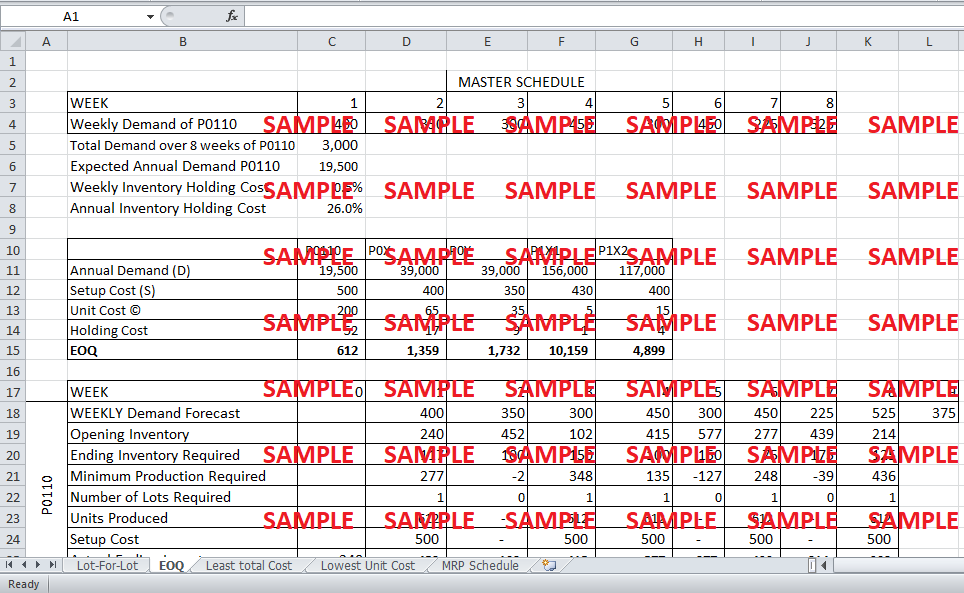 Case Analysis for Material Requirements Planning at A Cat Corp

In the lot for lot technique, only such amount of output is produced in the period that is sufficient to meet the demand for that period so lot size may vary from period to period based on demand forecast. Detailed calculation is given in the attached excel file. Since in the case of A-CAT Corp. there are lead times involved at different steps, sufficient ending inventory should be available to meet demand in lead times. As the unit of lead times is not mentioned, it is assumed that lead times are presented in days. Assuming 6 days in a week, there should be an ending inventory of P0110 equal to around 34%(2/6) of demand for next week. Similarly, 50 % (3/6) of requirements of P0X and P0Y in next week should be present in ending inventory as it involves a further lead time of 1 day and 66% (4/6) of P0X1 and P0X2 should be present in ending inventory.

Once the number of units to be produced of each item is decided, now estimate the cost of producing that level of output. Different costs related to the inventory policy are measured over the period of 8 weeks for analysis purposes between different inventory policies. Since the cost of raw material remains the same irrespective of lot-sizing decision, it is ignored for analysis purposes. Only relevant costs are carrying costs and setup costs.

The total variable cost which is the sum of holding cost and setup cost comes out to Rs 20,408 in using the lot-for-lot technique. One could observe that in using a lot for lot technique, holding cost comes out to be very low since only such amount of ending inventory is held to meet demand during lead times in next week. Also, the number of units produced in every lot may vary from one period to another. This increases the number of setups required leading to an increase in the setup cost.

2. What is the effect on the cost of the P0110 units if the economic order quantity technique is applied instead of a lot for the lot?

It could be observed that original lot sizes and EOQ for P0110, P0X and P0Y are quite closer to each other, but EOQ for P1X1 and P1X2 is quite larger than original lot sizes. The major reason for this could be a significantly large setup cost relative to the unit product cost.

Once EOQ’s are decided, the minimum number of units required in each week of each product is calculated by considering the forecast as well as ending inventory requirements because of lead times. After it, a number of lot sizes for each product is calculated and this number would be zero when opening inventory is sufficient to meet the requirements of next week. Setup costs, inventory holding costs and cost of raw material are calculated for all products over a period of 8 weeks. It comes out that under EOQ method, ending inventory is quite higher than lot-to-lot sizing which leads to higher inventory holding costs. Total carrying cost is Rs 10,448 in using EOQ method while it is Rs 3768 in case of using the lot-for-lot technique. But setup costs in using EOQ method is Rs 8790 which is quite lower than Rs 16,640 when using a lot for lot technique. The cost of raw material is the same in using any technique. This one could conclude that the economic order quantity would lead to lower variable costs than a lot-for-lot technique by Rs 1,171.