Merton Truck Company, located in Michigan, produced two specialized truck models; Model 101 and Model 102. In 1988, the president of Merton was concerned about the company’s financial performance over the six months. He believed that the optimal product mix could be improved to increase profit if the capacity of certain departments were increased. Until the machine hours reach 4500 hours for Engine Assembly department, an hour increase in capacity of this department will increase the contribution by $2,000. One option to increase capacity was to buy extra engines from an outside supplier. An alternative way to introduce overtime in the Engine Assembly department. 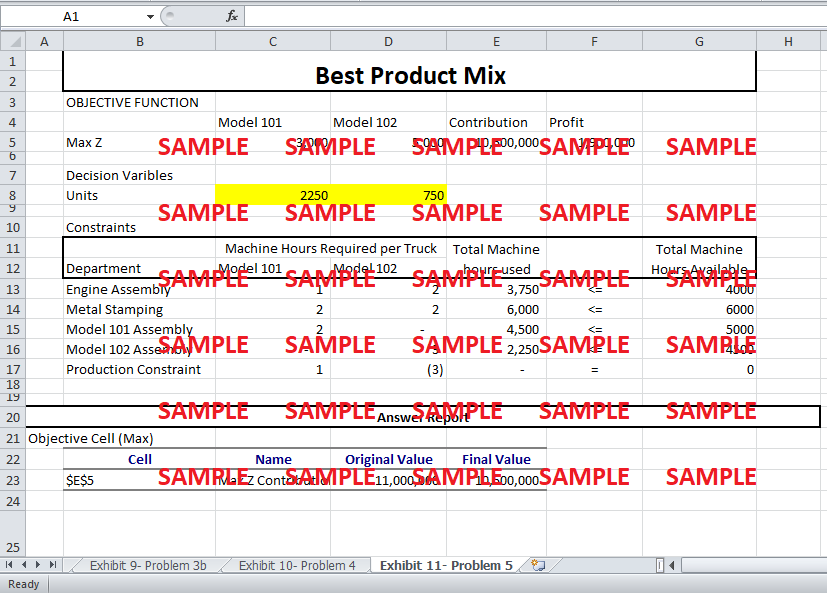 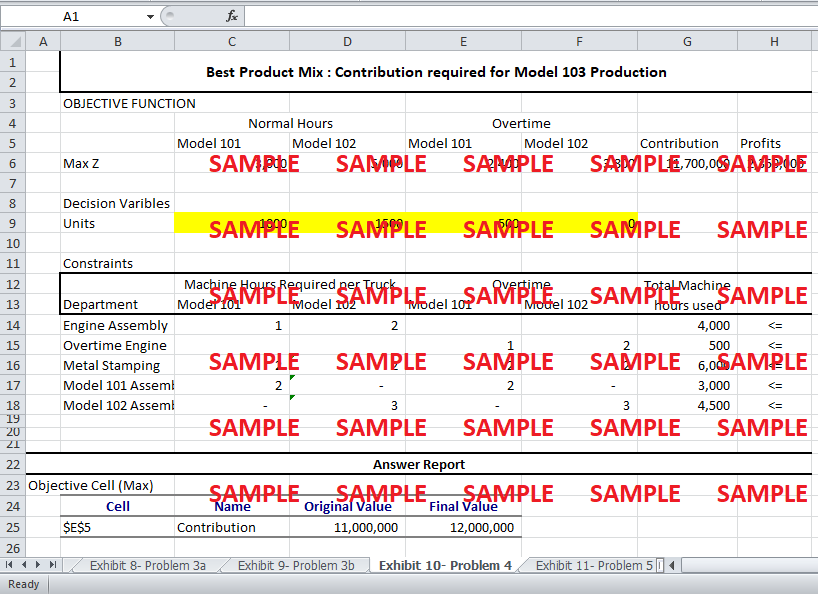 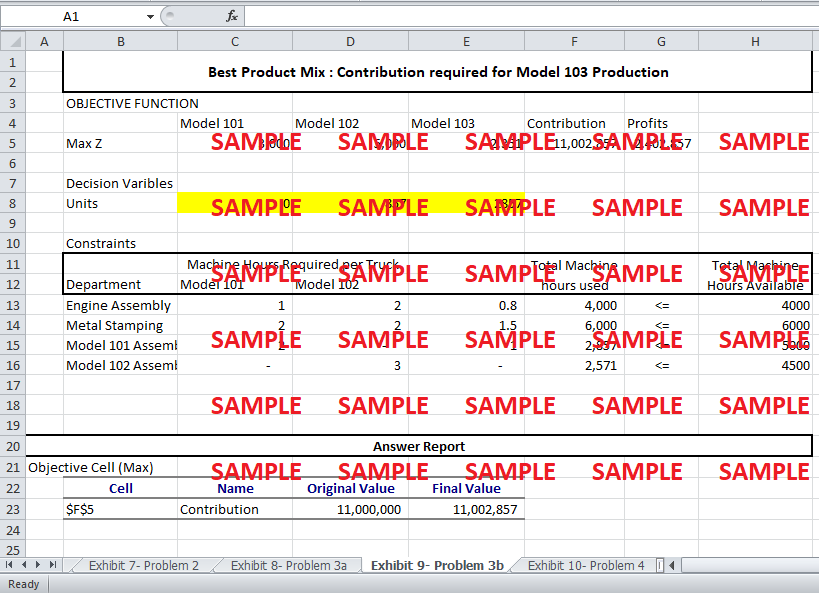 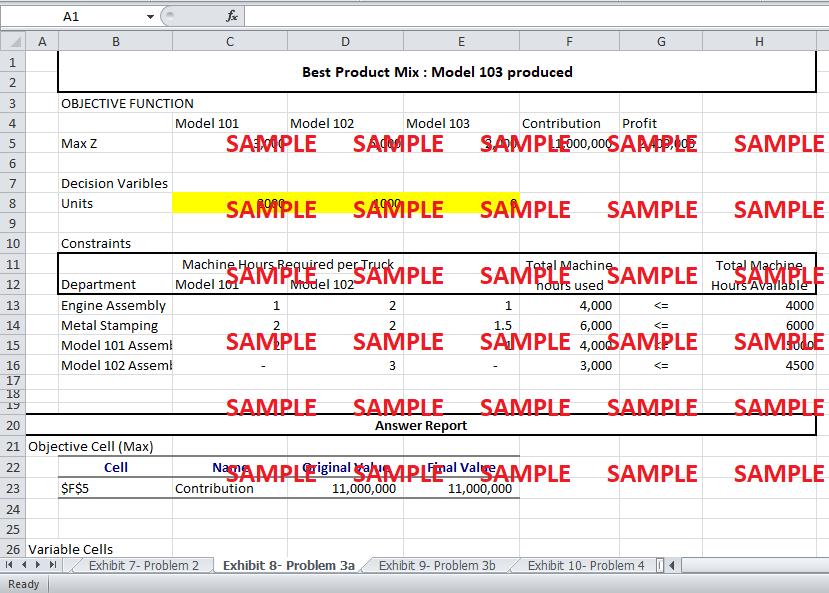 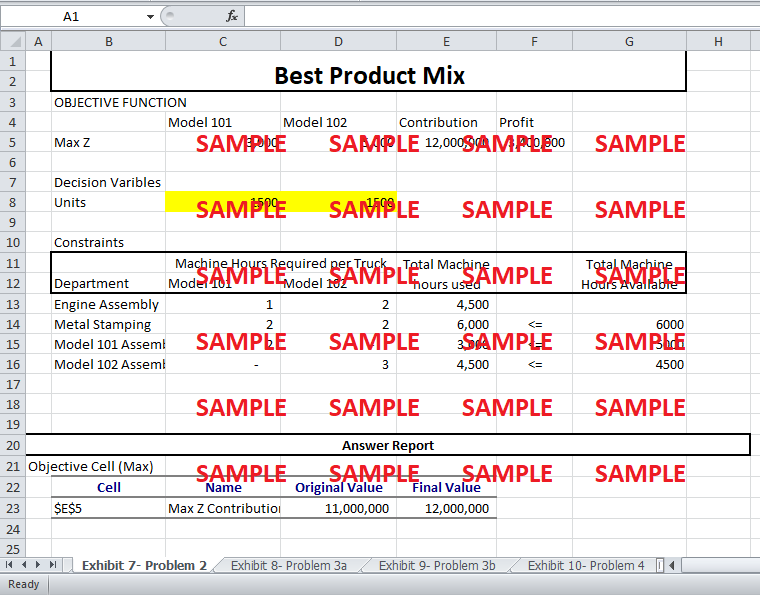 2. What would be the best product mix if engine assembly capacity were raised by one unit, from 4,000 to 4,001 machine-hours? What is the extra unit of capacity worth?

By increasing the Engine Assembly department capacity by one the machine hour, the total contribution rose by $2,000. This is because one less unit of Model 101 is made, and one more unit of Model 102 is made, and the difference in the contribution of the two products is $2000. Hence, one hour of extra capacity for this department was worth $2,000.

3. Assume that a second additional unit of engine assembly capacity is worth the same as the first. Verify that if the capacity were increased to 4,100 machine-hours, then the increase in contribution would be 100 times that in part (b).

According to the calculations in the previous questions, if the Engine Assembly capacity increases by 1 machines hour the contribution margin rises by $2,000. Therefore, if Engine Assembly department capacity increases by 100 machine hours, the product mix will change to 100 more units of Model 102 and 100 fewer units of Model 101. With 1900 Model 101 and 1100 Model, the contribution margin would increase by $200,000 to $10,200,000.

Exhibit 5 verifies the above analysis. The optimal product mix for 4100 machine hours capacity of Engine Assembly department is 1900 Model 101 and 1001 Model. This product mix shows a total contribution of $10,200,000.

4. How many units of engine assembly capacity can be added before there is a change in the value of an additional unit of capacity?

This would mean that more than 500 machine hour increase in the capacity of the Engine Assembly department will not alter the optimal product mix. At 4500 machine hour capacity for the department, the Model 101 production will to 1500 units and the Model 102 production will raise to 1500 units. The total contribution margin for this product mix would be higher than the current contribution by $2000 times 500 additional hours which will be $1,000,000. The net profit would be $12,000,000. Exhibit 6 shows that when the capacity increases by 1 more machine hours and is 4,501 for Engine Assembly department, the product mix remains constant at 1500 Model 101 and 1500 Model 102. Hence, the resulting contribution margin also remains unchanged at $12,000,000.

1. Merton's production manager suggests purchasing Model 101 or Model 102 engines from an outside supplier in order to relieve the capacity problem in the engine assembly department. If Merton decides to pursue this alternative, it will be effectively "renting" capacity: furnishing the necessary materials and engine components, and reimbursing the outside supplier for labor and overhead. Should the company adopt this alternative? If so, what is the maximum rent it should be willing to pay for a machine-hour of engine assembly capacity? What is the maximum number of machine-hours it should rent?

Merton’s production manager is considering buying either Model 101 or Model 102 engine from an outside supplier. This would not affect the fixed cost of production, but it would eliminate the variable cost of production. If the engine is bought from an outside supplier, the first constraint of the machine hours in the Engine Assembly department will be eliminated. The new model is as follows: