Sun Brewing was a subsidiary of Khemka family’s business group. It was founded in early 90’s and had become second largest producer of beer in Russia. Although growth potential in the market was immense, but still financial instability and rapid inflation had made it impossible for the company to stabilize its income even until 1998. Devaluation of Rubble in late 1998 led to sudden decline in stock price of the company by almost 90%. The survival of the company became questionable. Under these circumstances, Shiv Khemka, the executive director of the company was considering different options to deal with the situation. He had to take a decision whether he should keep investing in the company in this situation and wait for things to get better or give up the business altogether. 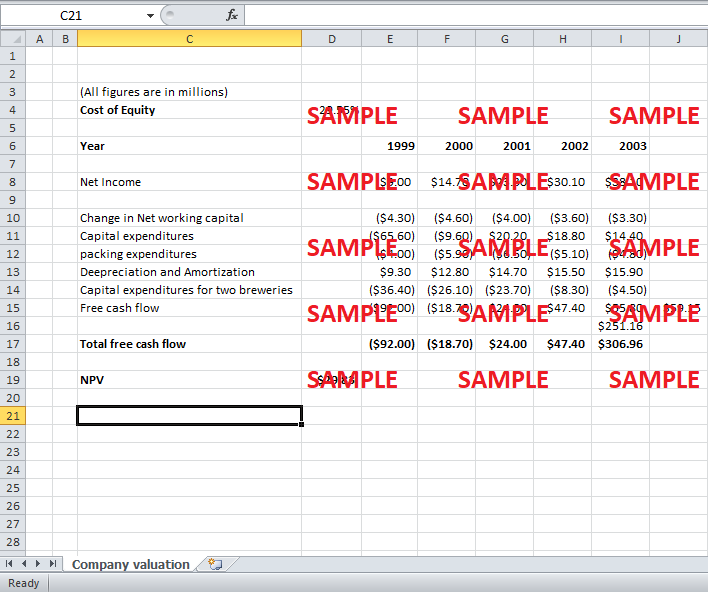 Case Analysis for Sun Brewing A

1. First consider the FDI decision. Why did the Khemka family enter the Russian market? Why did they choose the beer business, and how did they enter this business? What were the risks?

Initially, the Khemka family was distributing mining, oil and gas equipment and pursuing other similar modes of businesses in Russia. However, in 1989, political and economic reforms in Russia led to the privatization of businesses and, to make matters worse, Rupee-ruble trade agreements came to an end. So, Khemka family was forced to change the portfolio of businesses in Russia and to look for other avenues. They decided to invest directly in Russia and start a business that had immense growth potential in the existing scenario at that time. After talking to experts and consultants, Shiv decided to enter brewing industry in Russia, even though consumption of beer in Russia was lowest among all regional countries. The Khemka family chose brewing industry because they believed that low consumption in Russia was not due to lack of demand. Rather, low consumption was due to low quality production of products by existing local brewing industry players. They felt that it was an untapped market that could be captured, if they succeeded in offering high quality products to Russian market.

Being a pioneer of such a mode of business, Sun Brewing had the potential of becoming an industry leader by being first large scale supplier of high quality beers. The growth potential was immense as no big suppliers of high quality beer existed at that time. The SUN Brewing chose the method of acquisitions of businesses in the beer industry as a way of external growth. The potential for consolidation of the beer industry in Russia was immense and Sun Brewing was taking advantage of this opportunity by gradually purchasing low quality producers of beer and restructuring their operations. Infrastructures, operations and market shares of acquired businesses were restructured and consolidated to supply high quality products under the umbrella of Sun Brewing.

Two main risks that Khemka family faced were “exchange rate risk” and “political risk”. Constantly fluctuating political scenarios, government policies and regulations had made the investments of all foreign investors highly risky in Russia. For example, subsidies were removed, and production capacities were dismantled in an effort to reduce the consumption of beer in Russia. As a result of these measures, price of beer rose more than five times due to which sales of beer reduced significantly. On the other hand, exchange rate of Russia was constantly fluctuating and being a foreign investor, business of Khemka family was directly exposed to this risk. Apart from political and exchange rate risk, financing difficulties also posed a great threat to the survival of Sun Brewing. Due to financial distress in Russian economy, no easy financing option was available for Khemka family and costs of financing were also very high. Threat of new entrants was very high because many other foreign companies were looking to exploit untapped beer market in Russia.

2. Consider Sun Brewing’s initial financing. First, consider the equity raised through private placements and rights offerings. Why do you think the Khemka family chose these methods of raising capital in the early phase of Sun Brewing’s existence?

In the early phase of the business, the company wanted to raise funds to invest in the growing business. Retained earnings were not enough to finance and support the growth of the company. The firm chose private equity over public offering because at that stage; the firm was not ready to meet the regulatory requirements of an IPO. Government policies were constantly changing, and SUN Brewing required some time to adjust to the new privatization plan of government. Private equity also gave the company an option to negotiate the terms and conditions of agreement tailored to its own particular needs. Khemka family wanted to keep the majority of the ownership under all circumstances. An IPO at that stage of the business was not a good idea because the company was not expecting meager income for next few years due to huge investments in PPE and working capital. By selecting private equity as a mode of financing, Sun Brewing was not only able to take time to prepare itself for IPO, but also to negotiate terms regarding right issue and other matters with private investors. Private equity investors have the advantage of hiding the investment information from public and they do not have to adhere to stringent standards and policies that the public funds have to follow. It gives a degree of flexibility to both parties in the agreement, so that they can give each other space and time and build a symbiotic working relationship. The management of Sun Brewing knew that the company will take a lot of time before it attaining financial stability. Therefore, they wanted investors who could wait and make long term investments. Public equity investors are mostly concerned about liquidity of their investments and, hence they are less patient than private investors. Although, all these beneficial features make private equity very expensive, still the company chose this mode of financing because they believed that benefits of private equity are worth such high costs.

3. Next consider Sun’s other sources of the initial financing. What are GDRs, and why did Sun Brewing use these GDRs as a way to raise capital? Why did Sun Brewing follow up with an IPO in Luxembourg, and was this a good time to take the firm public? Why did the company not issue ADRs in the US?

GDR is an abbreviation of “Global Depository Receipt”. It is essentially a bank certificate that is issued in more than one country. The certificate holder gets shares of a foreign company in return for price of GDR’s. Although these shares are available for sale internationally, they trade as domestic shares in the country in which they are sold. By issuing Global Depository Receipts, Sun Brewing was able to raise funds in terms of dollars. In this way, company could avoid direct negative impact of domestic currency to some extent. GDR’s provided a channel for international investors to invest indirectly in Sun Brewing and to buy its shares. The company wanted to avail all the financing opportunities that did not entail public offering because the company was not in a suitable condition for an IPO. At that stage of business, it was easy for the company to convince private investors about the real earning potential of the company rather than convincing public investors. Public investors take decisions based on financial performance indicators shown in the financial statement of the company. At that time, due to financial distress and large capital expenditures needed to sustain growth, company’s financial performance was not reflective of the true earning potential of business. So, the company chose GDR because it was not ready to comply with the standards and procedures required selling shares directly on foreign stock exchanges. That is why the company chose an indirect method of investment from foreign markets. GDR also helped the company to develop a strong brand name globally and made itself accessible to international investors. The motive behind choosing GDR over ADR was that the company wanted to invite indirect investments from a number of countries rather than just U.S.