A videocassette rental store, Thumbs-Up Video, is started by Linda William. Thumps-Up Video store operated more efficiently had a more variety of tapes than few small rental tape stores located nearby William’s hometown. After six months of the operations of the store, it was required to prepare financial statements so that the financial position of the company and its profitability can be accessed. First of all, the transactions that occurred at the company from November 1988 through June 1989 are recorded in a set of T accounts. Later, statement of financial position and income statements are prepared by using the balance of each T accounts. 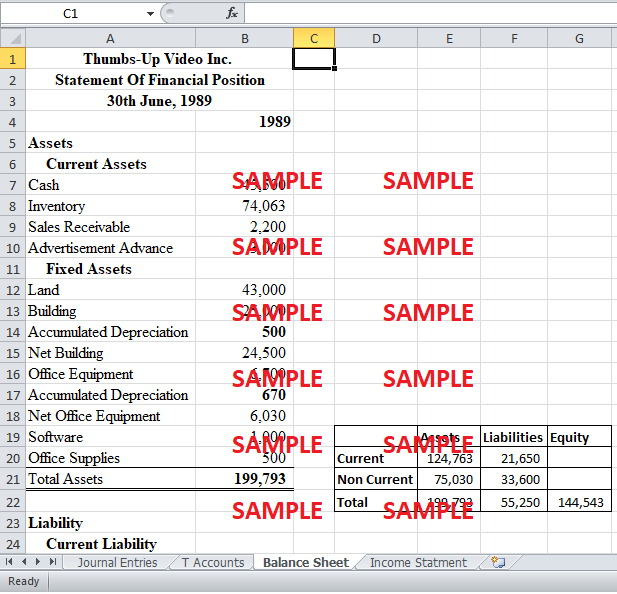 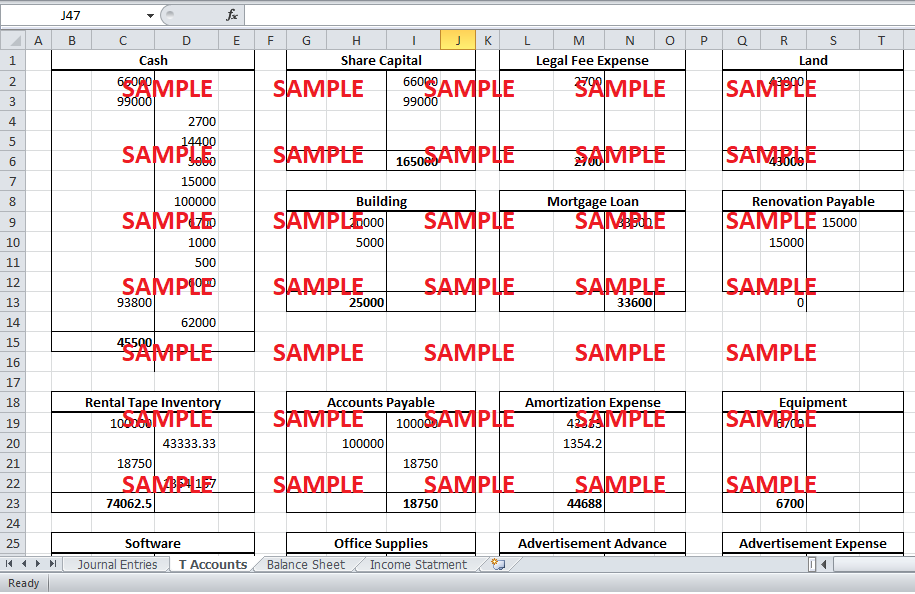 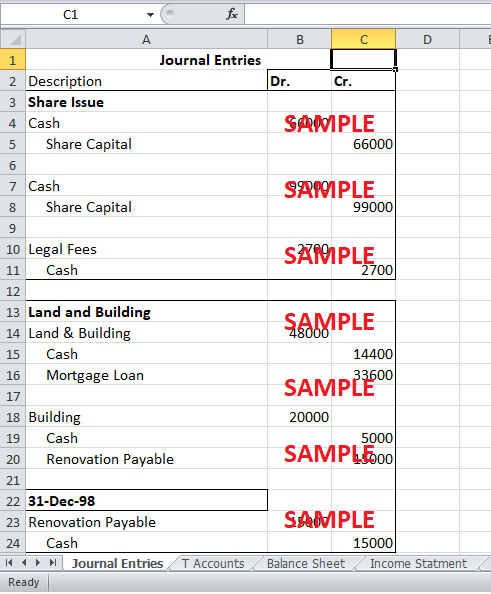 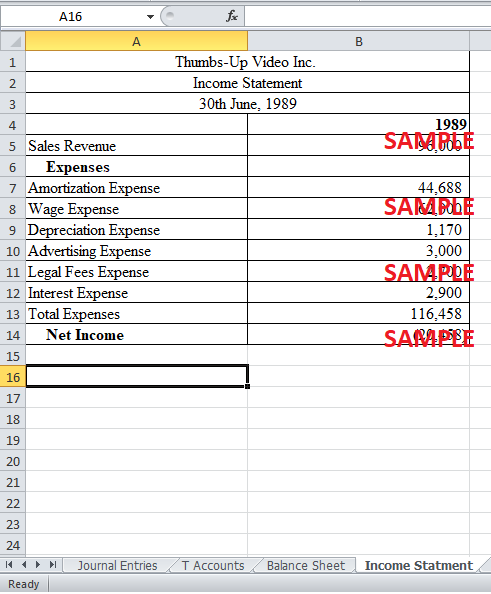 1. Construct a set of T accounts to record the transactions that occurred at Thumbs-Up Video, Inc., from November 1988 through June 1989.

The first step after the preparation of business plan is to raise capital for the new venture. A total of $165000 was needed to begin the project. Out of total capital needed, $66,000 was invested by William’s friend while remaining was raised by issuance of shares. The transaction regarding the share capital is recorded in two different T accounts, cash and share capital. The cash is debited by the amount of $165,000 while the share capital is credited by the same amount. In order to have the business incorporated, $2700 legal fee was paid in cash. The transaction is recorded by crediting cash and debiting legal fees expense account by $2700. The purchased price for land and the building was $48000, out of which $5000 was allocated to building while the rest is allocated to land. The total amount was paid by securing the mortgage and paying the cash. In this transaction, land is debited by $43000, building by $5000, cash is credited by $14,400 and the mortgage loan is credited by $33,600. As the building was old and needed renovation work, renovation work costing $2000 began in November, 1988 which lasted till the end of December, 1988. The renovation expenditure is capitalized as it will increase the life time of building.

At first, the cash is credited by $5000 and the renovation payable is credited by $15000. At the same time, building account is debited by the full amount of renovation cost. In the end of December, the renovation payable account is nullified as $15000 cash is paid, which decreases the payable account. The depreciation of the building is recorded for half year, which is calculated by dividing the total carrying value of building by 50, as the useful life of the building is 25 years. Therefore, depreciation expense was debited, and accumulated depreciation was credited by $500. The purchase of tapes is recorded in inventory account cash is credited by the same amount. The amortization expense is recorded for the tapes, which credited the inventory account. The recording of the transaction regarding equipment and software purchase debited their account by $6,700, and $3,000 respectively at the same time cash is credited. The depreciation expense of equipment for half year was calculated by dividing total equipment cost by 10. Depreciation expense of equipment is recorded in a similar fashion as the depreciation expense of the building is recorded. Advertisement advance is recorded in the beginning of the year amounting $6000. In the end of June 1989, half of the advertising expense is expensed out, which credited the advance and debited expense by $3,000. The new purchase of rental tapes increases the inventory accounts and the payables accounts at the same time. Out of total sales amounting $96,000, $2,200 is the amount of credit sales and the rest of the sales are cash sales. In order to record the sales transactions, the cash is debited by the difference of total sales and cash sales, sales receivable is debited by $2,200 and sales revenue is credited by the total sales figure. Wages are paid on cash; therefore, cash is credited and wage expense is debited. In the end, $2900 of interest expense is payable at the end of June, which is recorded by debiting the interest expense and crediting interest payable.