This case is about the problem faced by Mebane Davis, the new manager of Piedmont Operations Centre to decide how many part-time workers are required to complete the task of the Proof Department with the lowest cost for the coming week and afterward. The basic job of the Proof Department is to receive, process and clear checks and other documents as soon as possible. A check received may be cleared on the same day or maybe on the next day depending on the workload but all checks arrived during the week have to be done by Friday afternoon. These jobs are accomplished through 14 full-time and 22 part-time proof operators. Normally workers process 1000 documents on average per hour. There is variability in the inflow of the work for the department so before the start of each week, expected numbers of documents are forecasted and additional part-time worker hours required are predicted and scheduled accordingly.

In order to decide how many worker hours to schedule for the 67th week, first, he has to forecast demand through a method that is more reliable than others. 3 different methods of forecasting are used to determine which method gives a more reliable forecast than others. First is the Naïve method in which the actual workload during the last week is used as a forecast for the current week. Second is the long-run forecast of a predecessor that is 730,000 documents per week. Third is Exponential Smoothing, which is done through using coefficients from 0.1 to 0.5 at the interval of 0.1 to analyze the sensitivity of the current week data to the deviation of actual data from the forecast last week. Equation of exponential smoothing used is: 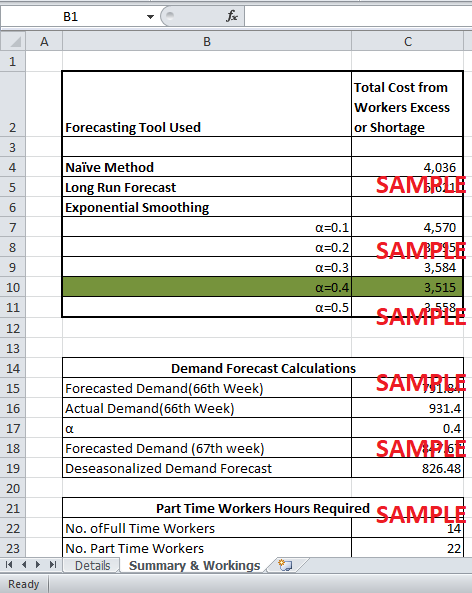 Case Analysis for Wachovia Bank and Trust Company N.A (B)

Then deviations of the forecast from actual data are analyzed, and estimate cost incurred due to the additional scheduled worker or worker shortage. Although the case tells that the cost of hiring overtime workers cost 1.5 times than a scheduled worker, but the impact may be higher due to higher checks remaining in afloat. For comparison, we assume that the cost of an excess worker is 1 for each additional scheduled hour than actual demand and the cost of a shortage of workers is 1.5 per hour. These methods are applied to given data of 66 weeks, and total excess cost to be incurred because of the inaccurate forecast is calculated. The results come out to be:

As it could be seen that using exponential smoothing with a coefficient of 0.4 would lead to the lowest total costs to be incurred because of forecasting errors, so Davis should use this method for forecasting demand for the coming week and deciding scheduled worker hours. It also shows that demand is fairly sensitive to variability from one week to the other. Now Davis should calculate expected demand during the 67th week in thousands of documents and then would Deseasonalized using a factor of 0.975 as given in the case. Using exponential smoothing, expected demand during the coming week would be:

Then a number of working hours of full-time workers are calculated and then subtracted from personalized forecast to calculate the number of part-time workers hours required as each worker processes 1000 documents per hour on average. Calculations are given below:

So Davis should schedule 182 part-time workers hours for the coming week to meet the demand for work. Similarly, for the coming periods, he should use the same exponential smoothing for forecasting with the coefficient of 0.4 and then decide about the schedule of the number of part-time worker hours required to manage operations of the Proof Department in a cost-effective manner.

As there is nothing mentioned otherwise, it can be assumed that payout to full-time workers and part-time workers for scheduled hours is the same. During any day in a week, workers try to complete as much work as possible till the end of shift except for Friday and any remaining work is completed the next day.