Nexgen Group is a structured finance solutions provider which provides its clients with tailor-made solutions as per the requirements of their clients. The organizational structure of the company is such that the company's branch in Dublin is the holding company, and it has split up its operations in Paris and France. The company's main financial tools include Collateralized Debt Obligations and Credit Default Swaps. Both are such that they aim to pass on lesser risks to clients and take most of it on their balance sheet. His is what distinguishes Nexgen where it neither falls in the hedge fund category nor in that of the investment bank. In January 2004, it was asked by Bank ABC to come up with a solution for their client such that their portfolio earns them a return equivalent to that earned on AAA rated bonds. This was a challenge for Nexgen Group because AAA rated bonds are not readily available in the market as they are held by buying and hold investors. Nexgen had to come up with a solution to structure lower grade bonds such that they give a return of AAA bonds to Bank ABC's client. 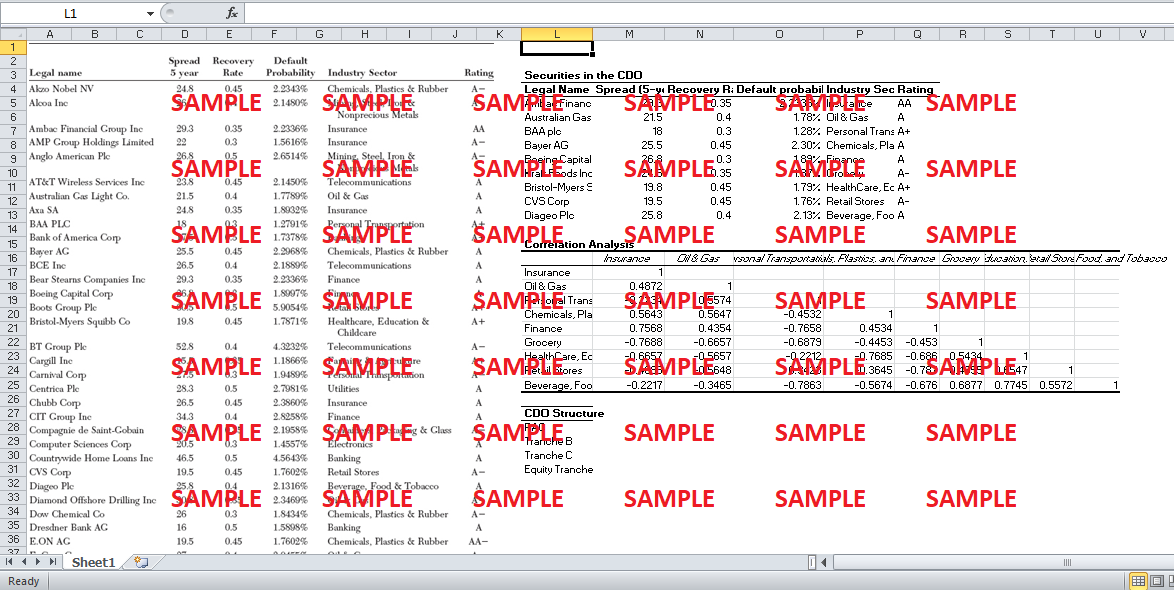 The problem posed to Nexgen Group comprised of coming up with a solution that would enable ABC's client to get a risk-return structure of AAA rated bonds. Thus, Nexgen is faced with a challenge of using lower grade bonds and forming a structure such that it would enable the possibility of earning higher returns with lower risk. Nexgen has expertise in taking credit risks on its balance sheet and exposing the client to a minimum risk, which would be ideal when it would be working with lower grade bonds. Thus to maintain an optimum balance between the risk and the return, the financial product that would be considered by Nexgen is Collateralized Debt Obligation.

In CDO, a special purpose vehicle is used which securitises the underlying assets which give them a higher level of credibility and then distribute them among different tranches, each with a different profile of risk and return. The underlying assets comprise of different categories of bonds and bank loans. The return generated from the underlying assets is collected, and it is then distributed among the tranches that have varying levels of risk and return profiles. The income collected is then distributed among the tranches in set proportions with the tranche with the highest rating getting the highest portion. The highest tranche results in low risk and depicts the characteristics of AAA-rated bonds by providing lower coupons as compared to the lower tranches which have higher associated risk levels and thus higher coupons (Van Loon, Cairns, McNeil, & Veys, 2015). Thus, through a CDO, different profiles of investors can be accommodated, including the Bank ABC's client. The mechanism of a CDO works more like that of equity as a CDO's highest-rated tranche gets paid before the mezzanine tranche which gets paid before the lowest tranche in the CDO in the event of default.

Collateralised Debt Obligation is a structure finance tool in which all the assets held are pooled together. A special purpose vehicle securitises the assets, the payment of which is separated according to the credit rating of the tranches. The first tranche acts as an AAA rated and is also referred to as the senior tranche. It has the highest priority in terms of getting paid in the event of default (Balson & Rausser, 2016). Nickerson & Griffin (2017) look at it from a different perspective by highlighting the significance of correlation of the assets in the pool which directly influences the extent of the expected loss that can be incurred by the senior most tranche which then extends to the other tranches as well. Thus, this is a very important consideration. However, Walker (2009) argued that CDO is still an effective tool for a pool of assets with a lower correlation coefficient; there is a higher number of tranches. Furthermore, the proportion of income allocated to each tranche keeps adjusting and is marked to market so that any change daily of the different tranches offset each other. CDOs are considered a very feasible option, as stated by Nickerson and Griffin (2017). This is because, through CDOs, investors can customize the risk and return they need from the investment. Thus, making a wide range of investment options available for the investors. Caballero, Farhi, & Gourinchas (2017) further pointed out that there is always a shortage of low risk AAA securities like government bond because they are highly demanded by the investors due to their feature of higher liquidity which makes them an attractive option for investment. Thus, his findings are in line with the methodology adopted to satisfy Bank ABC’s client. It is important to note that due to limited supply and increased demand, these come at a premium. Thus, the option of CDO is a cost-effective alternative. Hamerle & Plank (2012) covered a different aspect in which he talked about the differences in the skewness level of highly rated corporate bonds which tend to be adversely skewed unlike the collateralized debt obligation instruments because investors are not exposed to anyone specific default case. The CDO tool helps accommodate a wide range of investors with different investment needs according to which different tranches are assigned to them, which give them varying levels of return and expose them to varying levels of risk. This can be considered by taking the example of pension funds and insurance companies which expose the client to a lower level of risk and provide them with a moderate return. Lastly, the entire stance of using CDO as a financial tool to provide ABC's client with a tailor-made solution to get a return equivalent to a AAA rated bond is backed up by Luo, Tang, & Wang (2018) who found how widespread and prevalent the use of CDO and CLO have become as market has started accepting them widely which has boosted their growth. Thus at this point, it seems to be the most appropriate option.

To build the optimal collateralized debt obligation (CDO) instrument, the first step was to select the securities that will be included in the pool of securities. The client wants an AAA rated bond, which is not available, which is why a synthetic of the same will be created in the form of a collateralized debt obligation. The securities included in the pool were selected in such a way that their risk and return matched the risk and return of the AAA-rated bond.

To do so, a correlation analysis was conducted, so that securities with certain correlation patterns could be selected. This step was taken to select securities that are diverse and move in different directions so that the non-systematic risk of the portfolio could be diversified away, and the default and recovery rates of the portfolio could be brought in line with that of the AAA-rated bonds. Bonds that are unrelated or negatively correlated were included in the pool of securities. In addition to this, an analysis of the sectors that the bonds belong to was conducted (Barnhill Jr & Maxwell, 2002). Their relationship with the business cycle was determined, and then the securities from each type of relationship were selected. The bond's rating, recovery rates, and default probabilities were also kept in mind. Bonds that offered a higher spread were selected. Also, a mix of bonds was selected. Some had the highest ratings, some had the highest recovery rates, and some had the lowest default probabilities (Wojtowicz, 2014). This step was specifically taken to match the default rate of 0.3 on five-year bonds as per S&P. After using all the methods mentioned above, a pool of securities was built that matched the characteristics of the AAA-rated bonds.

The next step in this process was to determine how the CDOs will be issued to the client and others. For this, the tranche method was used. To build the tranches, the trade of risk and return was kept in mind, and the class A tranche that was to be given to the client was designed in such a way that it minimized the default probabilities along with reducing the contraction and the extension risk. The subordinated tranches were also designed in such a way that targeted the different kinds of investors and distributed the risk and return accordingly (Griffin & Tang, 2012). They were built after extensive research of the market explaining what the required return by investors on different levels of risk was. The equity tranche was also built to absorb all the losses in exchange for high returns.